How does a standing wave form?

Summary:
A short explanation on how standing waves form would be appreciated

I understand how waves undergo superposition. However, for a standing wave, the reflected wave is a mirror opposite of the incoming wave. By the superposition principle, won’t the 2 waves add up to 0, at all points?

When two waves of the same frequency and wavelength travel in opposite directions, something cancels. It’s not the waves themselves (that’s destructive interference) it’s the direction of travel hence the name “standing wave” as opposed to “traveling wave”.
robphy
Science Advisor
Homework Helper
Insights Author
Gold Member

There are instants when the superpositioned waves are zero (namely when [itex] t [/itex] is such that @etotheipi 's [itex] \cos(\omega t)=0 [/itex]), but apart from those instants, only the "nodes" (the [itex] x [/itex]'s where [itex] \sin(kx)=0 [/itex]) of the standing wave are forever zero--the superpositioned waves for other locations have a nonzero displacement.
sophiecentaur
Science Advisor
Gold Member
2020 Award

kuruman said:
It’s not the waves themselves (that’s destructive interference)

Why distinguish between the situations. If the resultant amplitude is less than the mean of one wave then you have destructive interference. The standing wave pattern is stationary in just the same way that a (stationary / standing) interference pattern forms on a screen. Precisely the same phenomenon.
Many standing wave patterns do not have perfect zeros, of course.
Mister T
Science Advisor
Gold Member

phantomvommand said:
However, for a standing wave, the reflected wave is a mirror opposite of the incoming wave.

phantomvommand said:
Summary:: A short explanation on how standing waves form would be appreciated

I understand how waves undergo superposition. However, for a standing wave, the reflected wave is a mirror opposite of the incoming wave. By the superposition principle, won’t the 2 waves add up to 0, at all points?

That rather depends on the mirror!

In some cases, yes this is precisely what happens and it is called a 'perfectly matched load'.

In others, there is a mismatch between the incoming wave and the 'load'.

That's why in RF engineering, for example, if one wants to be rid of standing waves (which one very much usually does want) then the transmission line and the load it goes into have to be configured in such a way that their impedances are conjugate.

In mechanical examples, such as a plucked string on a guitar, the mechanical wave of the string has a low 'mechanical' impedance and the bridge it is attached to is very high, hence the reflected wave. (If the bridge was made of a sponge then it'd be more a matched load and the energy absorbed.) This impedance mismatch creates the reflection but it is imperfect and some small component of the energy in that wave is dissipated into the bridge, the remainder goes back into the string. That wave resonates on the string, and the small component of the energy that goes into the bridge (defined by the 'Q' of the system) then stimulates modes in the guitar body which radiates the noise.
sophiecentaur
Science Advisor
Gold Member
2020 Award

phantomvommand said:
Summary:: A short explanation on how standing waves form would be appreciated

By the superposition principle, won’t the 2 waves add up to 0, at all points?

To get cancellation, the waves have to be of the same amplitude and exactly in anti phase. The phase of the forward wave, viewed at one point, will constantly be progressing. The phase of the reflected wave will also be constantly progressing. It's only if the path from the wave, via the mirror and back, is exactly a whole number of wavelengths that the phases of the two waves are in anti phase to give a node. (Both in phase for an antinode) at nowhere else will this happen and you will get a non-zero resultant of the complex addition of the two waves. If you assume a rigid fixing at the 'mirror' or a short circuit if it's a electrical wave then the reflected signal will be in anti phase at the point of reflection and if you have a free end or an open circuit at the reflection point, the reflected wave will be in phase and the positions of nodes and antinodes in the standing wave will swap.
sophiecentaur
Science Advisor
Gold Member
2020 Award

Exactly the same thing is going on with the 2D interference pattern for just two sources. There are regions of highs and lows, which are stationary. If the two sources are far apart (a couple of wavelengths, say, the pattern won't just be the familiar 'rays', spreading out from Young's slits but there will be a 'chequered' pattern on top of the 'rays' so in any given direction it goes from maxes to mins between the sources.
This Wiki image has various combinations of spacings to produce a range of patterns. The line between the sources shows a simple standing wave. 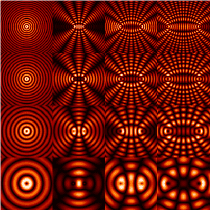 Related Threads on How does a standing wave form?

F
Reflection of inverted waves to form a standing wave