I Knew They Were Smart

Police in Iran are reported to have taken 14 squirrels into custody because they are suspected of spying.

They have excellent infiltration skills as evidenced by my "squirrel-proof" bird feeders. I was wondering how long it would take someone to harness that incredible talent pool.
Last edited by a moderator: May 3, 2017

I've heard some weird stories like trying to equip bugs with bugs or miniature cameras, but squirrels?

Still they shoot spies don't they? Or will they trade them with Iranian squirrels caught deep in US territory?
Ivan Seeking
Staff Emeritus
Science Advisor
Gold Member

Hmmmm, this makes me wonder about our local squirrels. Could they be moles?
FredGarvin
Science Advisor

Ivan Seeking said:
Hmmmm, this makes me wonder about our local squirrels. Could they be moles?

Please send more squirrels here for spying since I love them!:!!):!!)
berkeman
Mentor

No, no. It's just a big misunderstanding. Bill Murray and a film crew from the upcoming movie "Caddyshack 4 -- Revenge of the Squirrels" were detained briefly at a country club on the border.....
FredGarvin
Science Advisor

They have excellent infiltration skills as evidenced by my "squirrel-proof" bird feeders. I was wondering how long it would take someone to harness that incredible talent pool.

Damn and Bush spent all of those billions on data mining.
Last edited by a moderator: May 3, 2017
FredGarvin
Science Advisor

edward said:
Damn and Bush spent all of those billions on data mining.

They are everywhere and they are nowhere. They are the perfect spies.
Astronuc
Staff Emeritus
Science Advisor

The Sky story reminded me of

British military officials are denying reports that they released, we kid you not, "strange man-eating bear-like" badgers to sow fear among the residents of Basra, Iraq.

"We have not released giant badgers in Basra, and nor have we been collecting eggs and releasing serpents into the Shatt al-Arab river," Maj. David Gell tells reporters, according to The Guardian.

British media report the creatures in question are "honey badgers," or ratels, a small but fearless type of animal that is native to that part of the country. Ratels can weigh up to 30 pounds, The Times reported. "Capable of taking on a cobra, they are far more aggressive than their European counterparts, but not usually known to attack humans, unless cornered or provoked," the paper says.

Squirrels are unreliable spies, though. Chipmunks love undercover work, and are very good at keeping an eye on things. I've got two trained, and have a large pool of talent to draw from, as long as there are seeds under the bird-feeders. 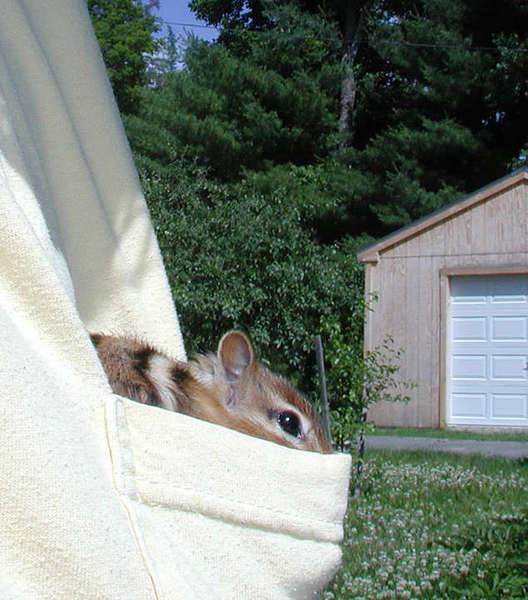 I love the photo that goes with the story. But, since as far as I can tell, squirrels do their darnedest to do exactly the opposite of anything you really want them to do, I can't see how they'd be very reliable as spies unless you wanted to know where Iraq's stash of bird feeders was.

turbo, adorable chipmunk photo! Reminds me of the ones I had trained as a kid. I used to sit on the back porch or just inside the door with a row of peanuts placed on my legs, and the chipmunks would happily sit on my lap stuffing their faces (the most fun, though, was to give them one of those peanuts with 3 nuts in it instead of the usual 2, and watch them try to figure out how to stuff it in their cheek, because it would never fit...:rofl:).
turbo
Gold Member

On Monday, I found an old T-shirt with a pocket and loaded the pocket with seeds, and I got this little girl comfortable with sitting in my pocket, stuffing herself. At the same time, another chipmunk that I had hand-trained, but was too nervous to climb up on me got the idea that she was being left out of a good thing and tried to join in, although this girl was having none of it. As soon as she left to stash her seeds, the other chipmunk was climbing me and eating out of my pocket. It's surprising how much these little critters can learn from example, as opposed to hands-on training. They took turns (enforced by the "queen" chipmunk) until yesterday, when I was able to feed this one nestled in my pocket and feed the other girl with a spare hand. Truce!
Smurf

:rofl: :rofl: I love you guys! :rofl:
devil-fire
iv read of the British MI6 (or is it MI5? the foreign guys, not the domestic ones i mean) who wanted to put a bug in the plumbing of a building and used a mouse who would be lowered down the pipe with a piece of wire X meters long and the bug on the end. the mouse was the best of 3 candidates at taking the first horizontal pipe while being lowered. when the wire reached its maximum length, it dropped the bug off the mouse where it needed to be and the mouse went on to live a long and reproductive life in the building. the other mice candidates would be content with just being lowered down the pipe so they failed the training program and went back to R&D.
Log in or register to reply now!

Related Threads on I Knew They Were Smart

How smart were mathematicians in high school?

News I thought they were on our side

Who thinks they are smart?
2

What were they thinking?

I knew it was wrong but i did it anyway

If I only knew then what I know now
2

Just because they attend MIT doesn't mean they are smart
3

News It is an irony they were told this would happen.

I want to be smart

Are good scientists smart or do they study hard?