Im having a problem with the inverse gamers fallacy. I can't get my heard round two seemingly true but contradictory statements.
The original form of the fallacy as I understand it says that if you walk into a casino and see two 6's has been thrown on the table. That event is unlikely (probability 1 in36) however it does not give you information as to how many dice rolls there have been in the past.
So far that seems true. Double 6 is just as likely as any other combination of two dice throws.
But when you start to apply it, there seems to be cases where it is not true.
Lets suppose you see someone flip heads 20 times in a row. As I understand it the probability of that is one in 20 million. So it seems more likely to have happened if it was attempted 20 million times than if it was only attempted once. That means we can infer how many times something has happened on the basis that it was unlikely. So that seems to imply the inverse gamblers fallacy is wrong. But the logic above seemed fine. To put it another way the 20 heads in a row is just as likely as any other combinations of heads and tails. So that implies the inverse gamblers fallacy is right. So it seems the fallacy is both wrong and right which can't be true but I can't see where my slip up is. Can anyone help?

Another way to put it would be suppose the casino pays out a prize money when the double 6 but no other number is thrown. You have just heard someone has won the prize money as a double 6 was thrown. You now are given even odds on two bets . The bet is: how many times was the dice thrown before the prize money was given out? You can bet on less than 5 times or more than 5 times. What should you bet on? it seems obvious you should bet on more than 5 times but if the inverse gamblers fallacy is right it shouldn't help. but the logic behind the inverse gamblers fallacy looks sound. Again something is wrong, but I can't see what it is.

The randomness of a roll of the dice has what is called the "memory-less" property. That is to say that history has no effect on the future. As an extension, the present also gives you no information about the past.


windy miller said:
So it seems more likely to have happened if it was attempted 20 million times than if it was only attempted once.

Here you are talking about expected value, the expected number of successes in a certain number of trials. That said, 20 million failures does not in any way influence the odds of a success on the next trial. Expected value is an aggregate number, over time you will expect to see that be the average.

Below is a graph of probability that the first double six will occur on the nth roll. You can see that the plot crosses the .5 mark at around 25. So I would take the even odds on 25 or less, but anything less than 25 rolls, I would choose the alternative "more than" option. 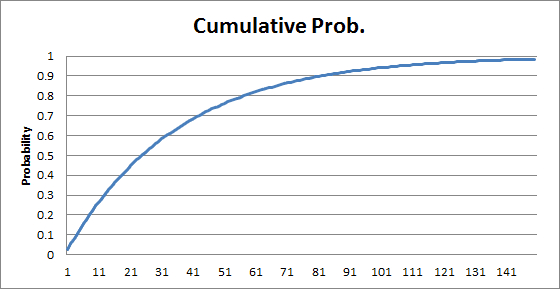 Thank you for your reply. let me see if i understood correctly. It seems you are basically saying that there is a difference between cumulative probability which does depend upon the frequency of events and individual probably which does not. Is that right?
Assume there is a lottery with odds of 20 million to 1 of winning and I find someone has won. Should i expect to find 20 million tickets sold?
FactChecker
Science Advisor
Gold Member

windy miller said:
Thank you for your reply. let me see if i understood correctly. It seems you are basically saying that there is a difference between cumulative probability which does depend upon the frequency of events and individual probably which does not. Is that right?
Assume there is a lottery with odds of 20 million to 1 of winning and I find someone has won. Should i expect to find 20 million tickets sold?

That's right. The odds on any one event are unchanged. So, you are just as likely to win the lottery this week as you were last week...even if you won last week. If you know that at least one person won the lottery, you would be looking for the expected number of tickets sold, given that at least one person won. This expected value problem should work out to 20 million.
FactChecker
Science Advisor
Gold Member

This may help:
Suppose you do 20 coin tosses and get 20 heads. If you are GIVEN that the coin tosses are fair and independent, then you must just accept that you saw a very rare event. But we are never GIVEN that fact, even if we are doing the coin tosses ourselves and trying to be as fair as possible. Although 20 heads is no less likely than any other result, given fair coin tosses, it does make us seriously doubt that the distribution is fair. The 20 tosses do not have the statistical properties of fair coin tosses. In reality, you would want to apply statistical tests to see if the results might come from fair coin tosses. A Chi-squared goodness of fit test would allow you to test that. On the other hand, if there were 20 heads in a row in many millions of coin tosses, the Chi-squared test might show that the tosses might be fair. There are other tests of statistical properties that can also be applied.
Last edited: Jun 13, 2016
Share:
Share

W
The Prosecutor's fallacy and probability

S
A Is this a Formal (Statistical) Fallacy?