Hello,
I'm a chemist and I'm currently working on my PhD on materials science.

I'm trying to determine the pressure difference necessary to achieve the desired gas flow inside a chamber. The scheme of the chamber is the following: 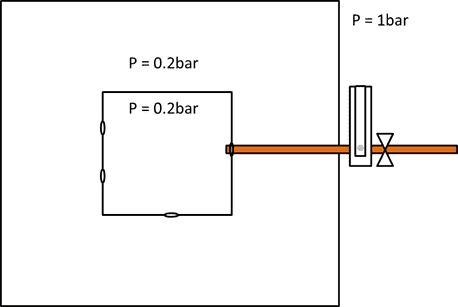 I have a big chamber which is evacuated to 0.2 bar, and another small one inside with 3 holes (Diameter = 6 mm). There is a copper pipe connecting the small chamber to the outside environment (air, P = 1bar) and regulated by a valve. Mass flow is read with a flowmeter. When the valve is open, air is forced inside the chamber but the internal pressure of the chamber is kept constant (the pump is powerful enough to maintain 0.2 bar). The small chamber is not air tight and there are many gaps between the wall, so I don't think evacuating it should be an issue (and so far it wasn't).

I don't know if these data are necessary or useful at all for what I want to find out, since in my case ṁ is technically unknown, but this is what I was able to calculate. How can I get the dependence of ṁ from ΔP? Any equation I missed along the way?

As a chemist, you should have at least some experience with problem solving and making exercises. Completeness is always nice:

Do you think the biggest resistance in your leak is the flowmeter itself ? Or can it be ignored ?​
Did you ever do pressure driven flow calculations ?
Manganese

Unfortunately fluid dynamics is not my field of expertise. I've learned the basics back in my 3rd year of university and that was it, so now I'm relying on 6 year old knowledge of something I've never really practiced and that wasn't the focus of my studies. I am unsure if I am even approaching this issue correctly.

The density I reported is at 1 bar. Since I don't know what relationship links the two pressures, I just treated it as if the air was pulled inside the pipe with enough force to generate that flow, therefore restricting my analysis to the pipe only and not taking into account what happens in the chamber or what is the pressure gradient.

Of course I'm interested in knowing what the gas flow will actually be in the chamber, especially because I will have to carry tests at high temperature (so we also have the effect of T). But even if I calculated the density at 0.2 bar and RT, 500 or 1000°C, I still wouldn't know what to do with this data.

As far as the flowmeter is concerned, I think that at very high pressure differences the resistance of the flowmeter is negligible. However, I'm interested in knowing what is the minimum driving force, in terms of ΔP, to effectively pull the air in, so in that case it would become the limiting factor I guess.

Well, there has to be a first time for everything and now is as good as any time. You'll need it and at PhD level you're supposed to be able to handle this.

You'll notice the link features the length of the pipe, so you'll need a value for that.
Since your air is not incompressible, you'll need to integrate (numerically, probably).

We've had several threads on emptying and/or filling gas tanks; it's not a trivial matter with a simple formula, e.g.:

Infinity_a said:
The main aim of my question is to find time taken by gas filled tank while emptying (from full to zero) it into atmosphere?

BvU said:
Well, there has to be a first time for everything and now is as good as any time. You'll need it and at PhD level you're supposed to be able to handle this.

You'll notice the link features the length of the pipe, so you'll need a value for that.
Since your air is not incompressible, you'll need to integrate (numerically, probably).

We've had several threads on emptying and/or filling gas tanks; it's not a trivial matter with a simple formula, e.g.:

In the conditions I listed, with an internal P = 0.2bar and external P = 1bar, the flowmeter reads 5 L/min. I was looking for a way to predict the flow by adjusting the internal pressure, but all those graphs and equations always come up with coefficients or constants that are hardly available. Also, the length of the pipe is an issue because it's connected to external rubber tubing (larger in section) and makes some turns along the way. My objective was to get one of those "coefficients" out by using the data I have and then recycle that number to make rough predictions.

For example, if the final formula that relates m and Δp is something like m = k*Δp2, where k is the multiplication of all the contour Parameters (among which those infamous coefficients), then by doing 1-2 measurements I could get a rough value of k and from there predict to a certain degree what flow I should be expecting.

Also that link you gave me talks about incompressible fluids and I have air. You said I have to integrate, but which of the many equations I'm thrown at should I integrate? What am I looking for exactly? I see there is a Δp there, but is it the same I'm looking for or is it related to something else? Do all those coefficients and parameters apply in the same way to an incompressible liquid or a gas?

Anyways, that other link you posted seems to have some answers to what I'm looking for, so I'll have a read at them. Thanks
BvU
Science Advisor
Homework Helper

Manganese said:
I have to integrate

If the pressure inside really is kept constant by the pump you can do a steady-state simulation, otherwise you need to solve a time-dependent flow.

Intake and exhaust effects can be expressed in equivalent length (or http://www.engr.mun.ca/muzychka/Flow_Analysis.pdf)
Manganese

If the pressure inside really is kept constant by the pump you can do a steady-state simulation, otherwise you need to solve a time-dependent flow.

Intake and exhaust effects can be expressed in equivalent length (or http://www.engr.mun.ca/muzychka/Flow_Analysis.pdf)

Wow, that's a really nice source of Information, thank you very much. My upcoming question would have been "how do I get an equivalent length of the pipe", but the first link addresses it and also so many options to play with.

Thank you again, this is very helpful! I will take my time to come up with a solution :)
russ_watters
Mentor

This is a difficult problem @BvU has gotten deep int so I won't try for now. However, I see a potential problem with your setup: depending on the pipe and valve sizes and flow rate, there might be considerable expansion in the pipe, so the flow rate measured by the flow meter might not match the flow rate at the outlet.
Manganese

I'll go step by step to make sure I'm not missing anything and also because this is the first time I use LaTex, so that it is easier for you to point out my mistakes.

If I didn't make any crucial mistakes along the way, then this is the relationship between the pressure drop and the mass flow. Before continuing, did I miss something important? And how do I deal with the coefficient f in this case?

What is necessary for a hypothetical supersonic speed Radio Controlled Jet?
2

Pressure drag and the Reynolds number

Why don't airplanes explode due to pressure difference?