x-vision said:
In my mind, the distance between two bodies would be the same, irrespective of whether we look at it from the left-hand side or from the right-hand side, so to speak.

As long as everything involved is motionless relative to every other thing in the scenario, then what you say is correct. Relativity deals with relative motion, though, so this example doesn't illustrate the equivalence of inertial reference frames.
PeterDonis
Mentor
Insights Author
2019 Award

Here's a force-fitted spacetime diagram for x-vision's OP scenario, as he stated it. Please verify, thanx ... 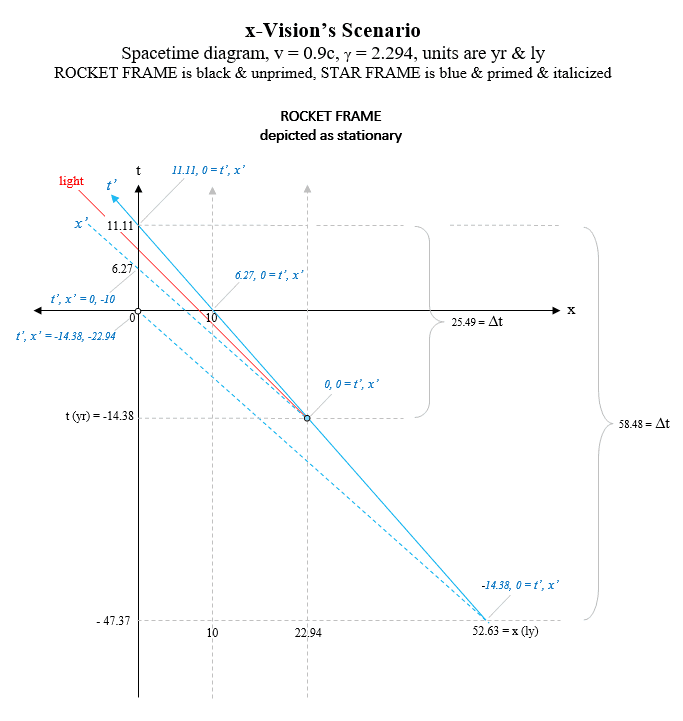 I reposted the spacetime diagram after you looked at it. I noticed I had omitted the negative signs on the (star's) x' values depicted there. They are corrected now.

Wow, this forum is awesome! This kind of fact checking really improves the accuracy and credibility of the forum.
Sagittarius A-Star

x-vision said:
Given that there is no acceleration involved in this example, can we safely assume that the two reference frames are fully symmetrical?

Yes, we can. The usual Lorentz contraction scenarios are not symmetrically.

I extend your scenario by an additional object and call it "Earth". The Earth is 10 LJ away from the star.

In the reference frame of the star:

The rocket is 10 LJ away from the star, when the rocket passes the Earth.

In the reference frame of the rocket:

The star is 10 LJ away from the rocket, before the Earth passes the rocket.
GrayGhost

While my prior spacetime diagram was correct in its depicted coordinates, it was technically incorrect from a standpoint of "proper convention" for spacetime diagrams. Proper convention, is to present the system which holds the velocity as positive (worldines slant from lower-left to upper-right) as unprimed, which is usually depicted as stationary (verticle). From the point of view (POV) of the other system, that system records a negative velocity (worldines slant from lower-right to upper-left). For that system, the "Inverse LTs" apply.

The inverse LTs are derived from the usual standard LTs, by merely plugging in -v for v into the LTs. The only reason this is done, is because many trying to learn SR often confuse the systems. With the above convention, you no longer have to be concerned with the velocity's polarity when using the transforms, although you do need to remember which system to present as unprimed. The only exception is the light path, which is always at 45 degrees in either direction, and which also bisects the time and spatial axes of all depicted systems, moving or not.

If you have any questions regarding the spacetime figures, feel free to ask.

Wrt my prior post #28, your OP scenario's spacetime diagram redone with with proper convention ... 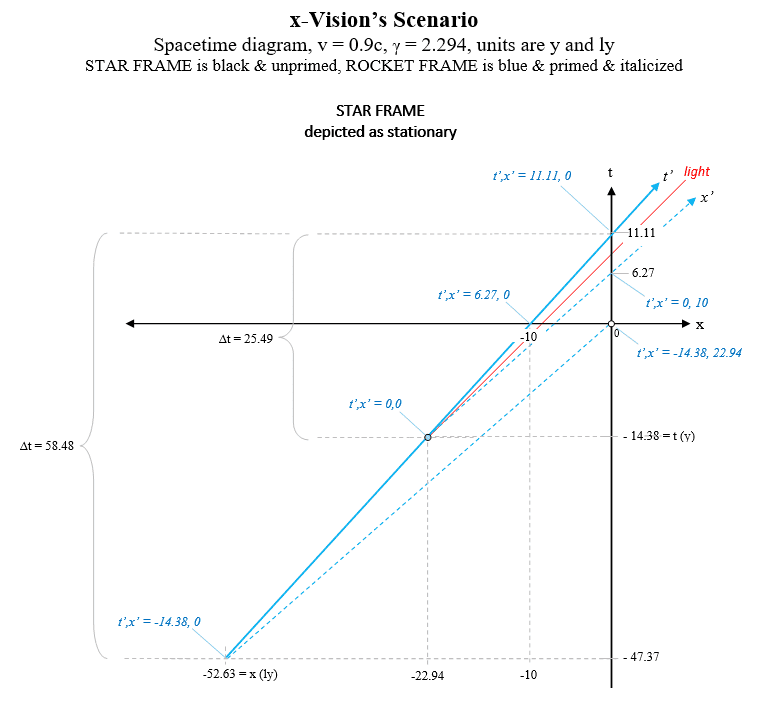 BTW, for your scenario the LTs apply, but only after some modification. The LTs were derived for spacetime systems that have a common origin. IOW x,y,z,t = x',y',z',t' = 0,0,0,0. Their spatial origins momentarily coincide at one point in time, when both their clocks read zero. In your scenario, as you had defined it, this is not the case. Your 2 systems momentraily coincide when both clocks read 10ly/v = 11.11 y. As such, I had to modify the LTs for the 11.11 y time offset. Here are the equations I used ... 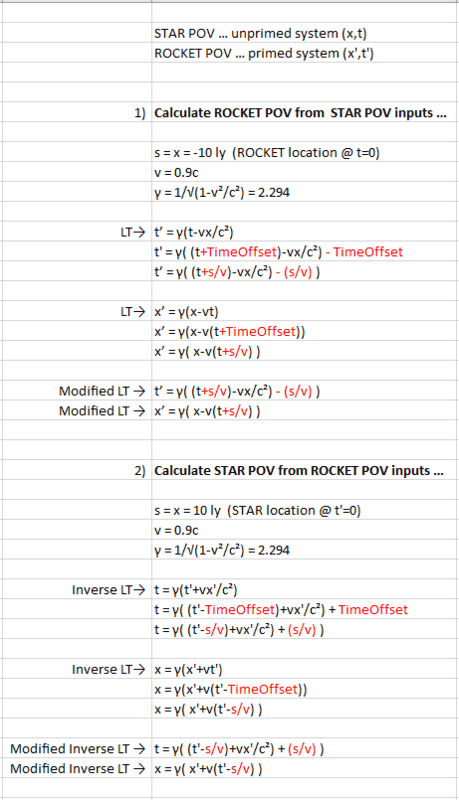 So, I used the modified LTs above.

You might try your same scenario assuming they meet up when both their clocks read 0, versus 11.11. Then you just use the standard LTs and Inverse LTs, and no longer need the Modified LTs above. Feel free to ask questions, as I'd be happy to assist. Hope that helps.

Wow, this forum is awesome! This kind of fact checking really improves the accuracy and credibility of the forum.

OK Dale. You're right, I shall try to do better in that respect. Here's what I had for that ... 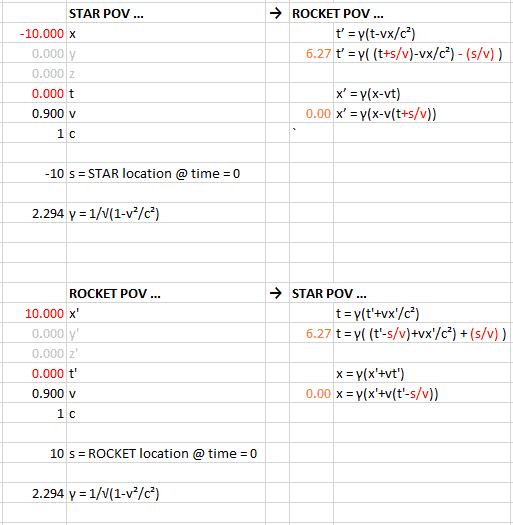 GrayGhost said:
I shall try to do better in that respect

I think you may have taken my praise of your fact checking as a sarcastic criticism. My praise was completely sincere, I genuinely appreciate being corrected when I am wrong. Of course, this most recent post is even better, as you said you would try to do!
Log in or register to reply now!

I Special relativity: frames of reference

Special relativity and frames of reference

I No special inertial frame of reference in Special Relativity?

B Special relativity - frame of reference
5

Frame of references in time dilation