The effect of exit pressure and temperature on a turbine

I still struggle with the interchangeability of pressure and temperature and how they affect the performance of various bits of turbomachinery. Microscopically they're very interconnected, in that the measure of pressure is the result of the confinement of the measure of temperature, however macroscopically they are often treated as independent (albeit coupled) quantities.

I have been thinking about full flow staged combustion cycles in rocket engines and can't reconcile a couple of hypotheticals, so I was hoping for a bit of insight. These turbines can present a unique thermodynamic scenario, where fluid downstream of a turbine is at a lower pressure but much higher temperature than upstream fluid.

A typical staged combustion cycle might consist of some kind of pre-burner that burns some amount of fuel and oxidant before expanding the products over a turbine, which then flow into a combustion chamber and nozzle to produce thrust. There is some amount of piping between the turbine exit and the final combustion chamber, so immediately after the turbine, both the pressure and temperature of the fluid drops as you would expect.

I have a hard time imagining what you are asking about. At first, it sounded like a turbojet. Then a jet with the compressor stage replaced by a preburner, but then merging the stages. Is it a ramjet?

Maybe you can draw a diagram.
parsec

Sorry. I should have made that more clear. It is a rocket engine which has a full flow turbine to drive a pump for propellants. I made a crude diagram of the two scenarios. 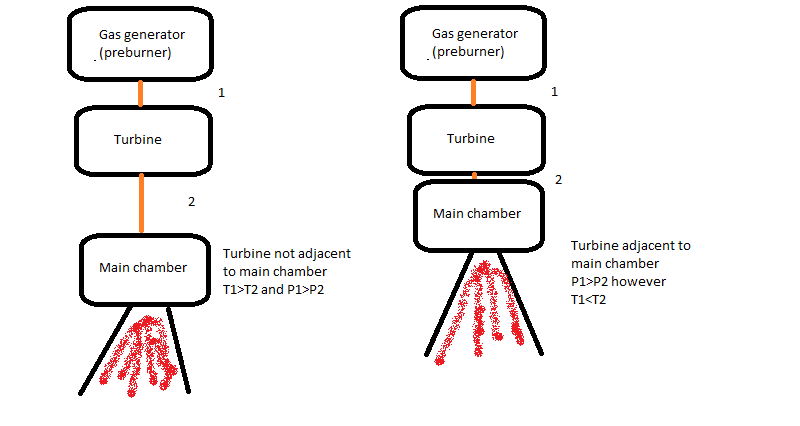 Suggested for: The effect of exit pressure and temperature on a turbine

Pressure of water exiting a hole in PVC

The effect of slightly slanted distance (arm) on torque output

Force of pressurized water exiting a hose or pipe?

Scaling pressure drop to other temperatures

Temperature loss along a duct

Venturi effect or Coanda effect or a combination of both in this windmill?

Measuring the total pressure of a centrifugal compressor