I did not find anything.

This image was on the site though, “Webb Reveals Shells of Dust Surrounding Brilliant Binary Star System.” 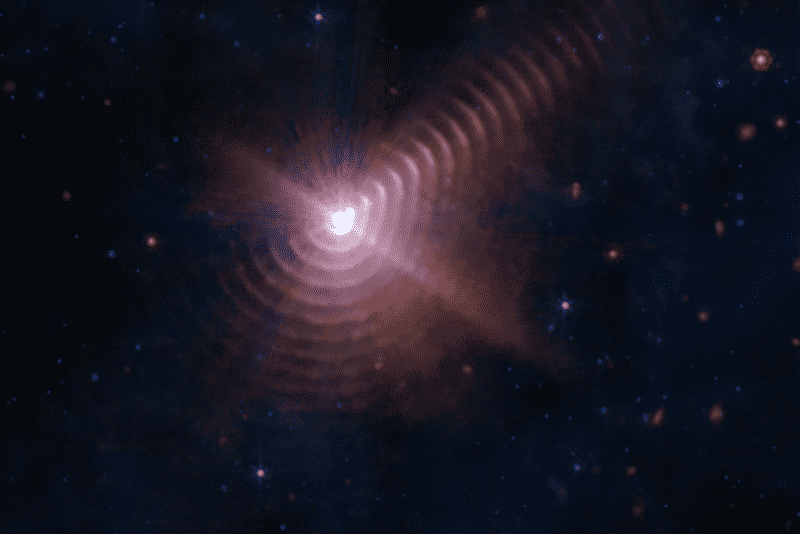 What is this top right? It looks very symmetrical in shape and colour, just an optical effect from the telescope like diffraction spikes? 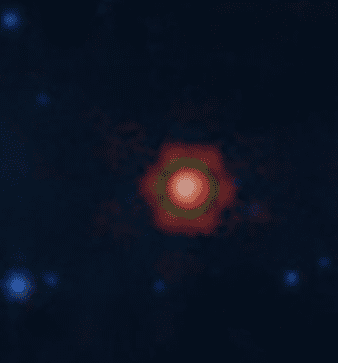 pinball1970 said:
just an optical effect from the telescope like diffraction spikes?

You may be right but if the effect is being introduced locally (to the telescope) then what could be special about the light from the star? It doesn't occur for other stars.
The effect seems to be a rare one.
Those regular fringes extend over millions of km, if we assume they're actually around the star. There's nothing that uniform around a star so if it were 'waves of ejecta', due to regular explosions, the spacing would change with distance unless the speeds are colossal and the star's gravity is having negligible effect. A series of images, over a long period, could reveal motion but wouldn't that require a very long timescale?
Borg
Science Advisor
Gold Member

pinball1970 said:
just an optical effect from the telescope like diffraction spikes?

Maybe dust from the main star being imaged? The other stars may be in front of the dust.
sophiecentaur
Science Advisor
Gold Member

Borg said:
Maybe dust from the main star being imaged? The other stars may be in front of the dust.

Possibly but no apparent colour fringes and the star is not monochromatic.
Weird.
pinball1970
Gold Member


I was looking for another picture with the weird object and this was on the front. 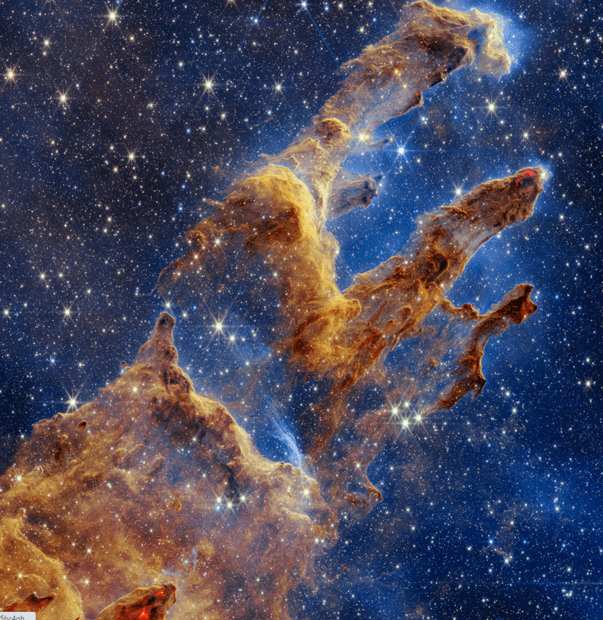 Side side with Hubble on the left from 2014
I turned on all the lights off in the office so I could see this in all its glory.
Wow.

Perhaps I am reading tea leaves. The hexagonal pattern is obviously from the optics (likely the mirror shape) but to my eye the green shape is rotated 30o relatve to the red one. I having trouble figuring a plausability argument for that, either diffraction or refraction. One also should be cognizant that these are false colors.
sophiecentaur
Science Advisor
Gold Member

But why aren’t all (bright) star images like it?
hutchphd
Science Advisor
Homework Helper
2022 Award

sophiecentaur said:
But why aren’t all (bright) star images like it?

My best guess (I just thought of it) is that it looks like the internal "camera" reflection from either the bright object in field or perhaps one just out of field off axis. I don't know enough about Webb optics to be any more definitive
pinball1970
Gold Member

hutchphd said:
My best guess (I just thought of it) is that it looks like the internal "camera" reflection from either the bright object in field or perhaps one just out of field off axis. I don't know enough about Webb optics to be any more definitive

I tried blowing up some of the other objects but they all were too blurred.
anorlunda
Staff Emeritus
Insights Author

Is there a NASA source to get such images with full resolution?
berkeman
Mentor

pinball1970 said:
I tried blowing up some of the other objects

Did you borrow Peter's blaster again? I thought we already had "the talk" about that... 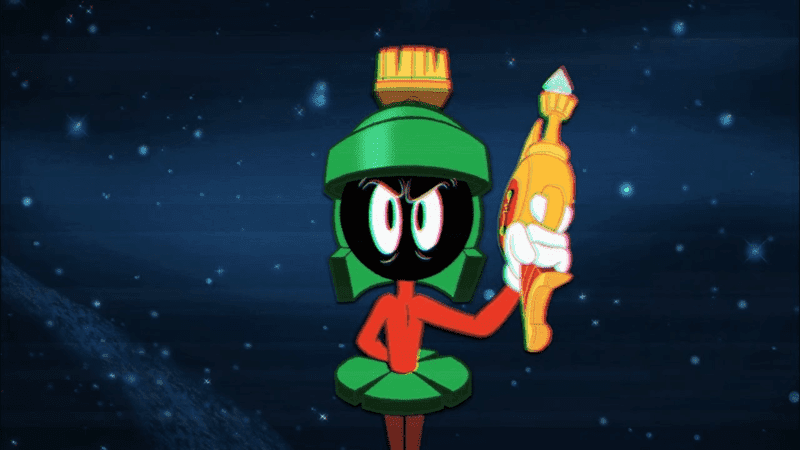 anorlunda said:
Is there a NASA source to get such images with full resolution?

The image is from the NASA site. I have been looking at other images and cannot see anything like this.
Dust has been mentioned, if it is fairly evenly distributed then could the rings which look almost concentric cause that effect via some sort diffraction?
Devin-M

But there are no coloured edges and you don't get diffraction effects from massive objects (i.e. out in space). Diffraction would have to be taking place the telescope optics and would apply to many images of the appropriate brightness.

The explanation that it's due to ripples in dust, caused by regular pulses of light certainly gets my vote. 1. Regular pattern. 2. No colour effects. 3. The fact that it's a rare effect indicates some very high energy involved.
Filip Larsen
Gold Member

New Webb images illuminate the formation of a galaxy cluster​

A team of researchers is publishing a paper based on new images taken by the Webb Space Telescope. The images reveal a dense concentration of matter in the early Universe, potentially indicating early stages in the formation of a galaxy cluster. And thanks to the spectrograph present, Webb was able to confirm that several galaxies previously imaged by Hubble were also part of the cluster. It even tracked the flow of gas ejected by the largest galaxy present. 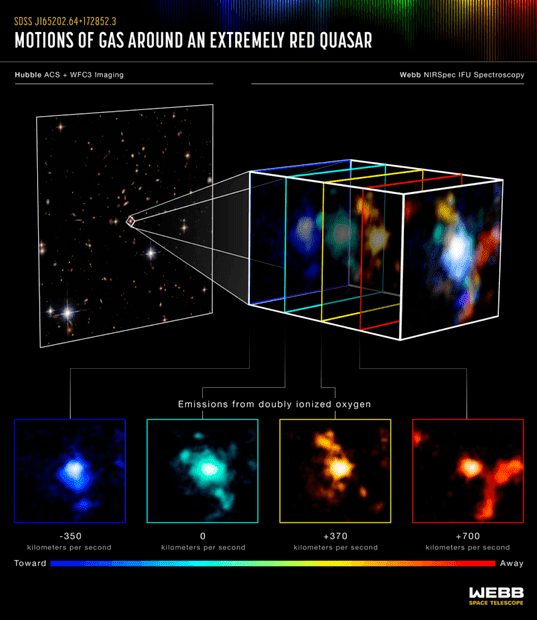 Thread is closed temporarily for Moderation (and possible thread split to break off the side-discussion about diffraction effects in telescopes)...
berkeman
Mentor

The NASA/ESA/CSA James Webb Space Telescope has revealed the once-hidden features of the protostar within the dark cloud L1527 with its Near Infrared Camera (NIRCam), providing insight into the formation of a new star. These blazing clouds within the Taurus star-forming region are only visible in infrared light, making it an ideal target for Webb.

They have fixed the issue with MIRI apparently. Nothing on the NASA site though.
Last edited: Nov 22, 2022
mfb
Mentor
Insights Author

Analysis of micrometeorite impacts shows that the May event was likely really bad luck and should stay an outlier instead of a regular occurrence.

Which one of those two guys actually threw the test brick? It would certainly be a CV item for him.
BillTre
Science Advisor
Gold Member
2022 Award

Make your own JWST.

BillTre said:
Make your own JWST.

Not sure how I missed this. Brilliant.

I was looking for updates on the NIRISS glitch and came across this.

with the associated paper.

It looks like Webb has recovered from the NIRRIS glitch

B Why is the Webb Space Telescope placed at L2?

B Question re Webb telescope at L2

B Jupiter from James Webb

B How hot is the Sun in space? (James Webb related)

I Is the animation/graphics for NASA's Webb telescope in error?

I How much better is HabEx going to be relative to Webb?

I Portable telescopes inside the International space station (ISS)