The Physics of Color Perception

I understand @Orthoceras' image in post #17. Here are the original and prism images split up into their R, G, B components: 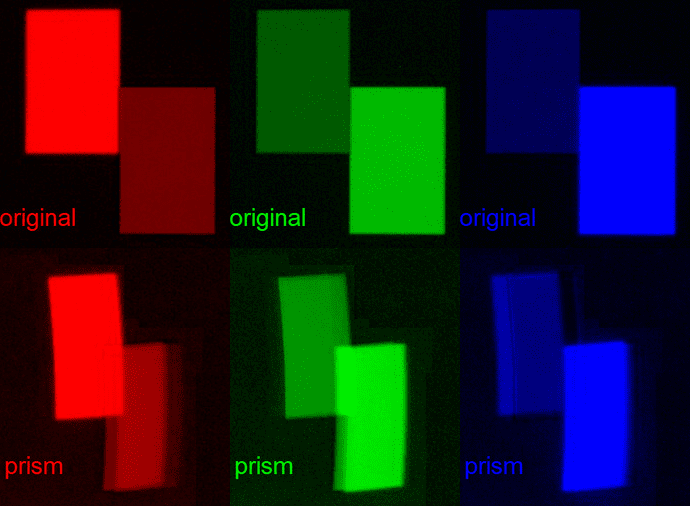 We can see that the original image is quite a mix of colours, but that the rectangles are uniform. The images through the prism are not uniform. The lower rectangle has three distinct brightnesses in the red channel and two in the green, and the upper rectangle has two in the blue. That suggests to me that there's some cross-talk between the channels (as calibration it would be interesting to see an image of three rectangles of pure red, pure green, and pure blue on a black background if you have time, Orthoceras).

And here's detail from near the middle of the prism images - the full colour version at the top and then just the R, G, B channels below. 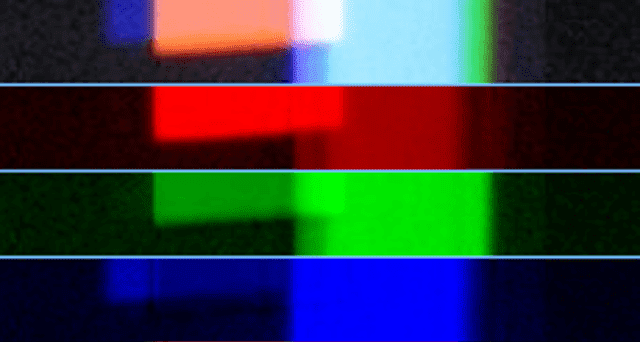 Here we can see that the red and green channels have moved about the same amount but the blue channel has moved quite a lot more. I think that's enough to explain what's going on in this image. The rectangles are slightly distorted by the prism (as seen in #19 - I get that now) but otherwise the prism image is just three copies of the two rectangles, slightly displaced with respect to each other. 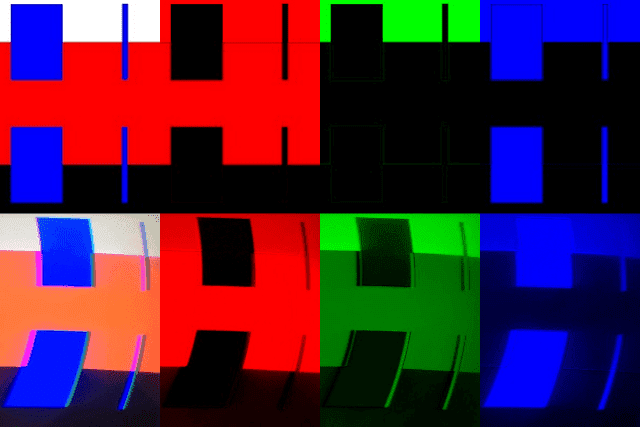 The red and blue channels are pretty much what I expected, but he green channel is more complicated. Here are slices through the red/black boundary: 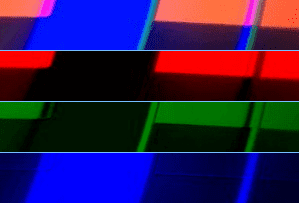 And a single-pixel slice (blown up vertically) through the red region:

I find this really hard to make sense of. If you ignore the green channel, it's fairly straightforward. The red and the blue slightly overlap causing magenta. But the green channel is really confusing. It has extra structure (that bright green band at the left hand edge of the blue rectangle) that doesn't seem to be associated with either of the other channels.

It would be really interesting to see the results of using @SecularSanity's same setup to photograph red, green, and blue squares on a black background both with and without a prism.
Last edited: Jul 5, 2020
sophiecentaur
Science Advisor
Gold Member

Ibix said:
I find this really hard to make sense of.

That was a useful post - well done.
I think it's only hard to make sense of because the spectra from the primaries are not straightforward. That, as I have remarked before, is to get as much light through as possible. Our vision is really bad at quantitative assessments of colour and there are some subtle details at edges that we just don't see.

If you could actually produce a spectrogram of the light from each of RGB and combine them, suitably shifted as with the prism. You would produce a quantitative value for the resulting pattern. If you had two pure sources then the whole Universe would shake if you didn't get a predictable result.
Log in or register to reply now!

Related Threads on The Physics of Color Perception

Question about perception of colors around light sources

B The color of laser's center

Colors of thin layers of materials

Color Subtraction to the Eye Problem

B Color and Wavelengths