I have a general understanding of how torque works, at least for "simple" objects that can be drawn as a single "bar" under the effect of various forces. In this problem there is a slightly more "complex" object though, and I'd like to know if there is a way to solve it without doing what I did to come to a solution, i.e. a way to solve it considering the object as a whole, and not by arbitrarily considering only a part of it (which feels like fair game, but maybe it's not...?).

A ladder is hanging upside down from a ceiling, and it's attached to the ceiling with two ropes. The ladder is made of two "legs" and it also has a horizontal piece in-between the legs which provides some force R; the horizontal piece has negligible mass. Each "leg" is long 2L, and each "leg" weighs a known force W (120 N). The angle α between the two legs, at the point where they meet, is known (60°).

Drawing (provided by the textbook): 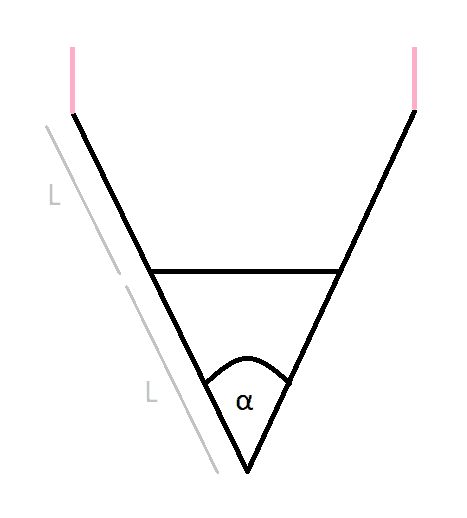 Torque = F⊥ * d (with d = distance between fulcrum and point where the force is applied, and F⊥ being the component of the force that is perpendicular to the object)
OR
Torque = d * F * sin (θ) (with θ being the angle between the vectors d and F)

This would be my free body diagram attempt: 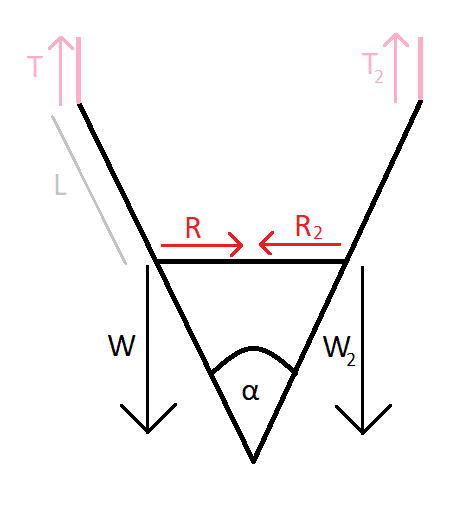 I'm not sure what the middle bar of the ladder was supposed to do, so R could point inwards or outwards depending on whether it prevents the "legs" from splitting apart or joining together. I assumed it pointed inwards.

As anticipated though, I couldn't really set the exercise up this way.

What I did instead was this: I cut the object in half, since it's basically a symmetrical situation where we get the same things on the left and right side. At that point, I considered the left leg alone, and imposed the conditions for equilibrium. It looked like this: 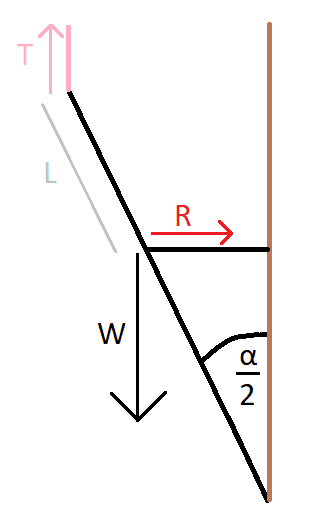 This gives the correct result of 69 N.

-------
Once again though, I want to know if it's possible to solve the problem without having to resort to splitting it in half, i.e. by using the full picture instead.

I tried doing that, putting the fulcrum in the same spot, and up to the point where I calculate the torque for the left leg it all went well. Then I tried to figure the distance d to use in the torque formulas for the right half, and realized I have no idea what to use for distance.

So, how can I handle this object, which does not have the typical "straight bar" appearance, and make the torque formulas work for it?

I tried by placing the fulcrum at the bottom point of the ladder, where the two legs meet, but then I end up with an equation that has the same left and right terms. So I tried moving the fulcrum to another point, the middle of the left leg, and reached the point where I'm stuck because I don't know what to use for d in the torque for W2, R2, and T2.

So...how would you have set the problem, if splitting the object in half was not an option?

Alex126 said:
Once again though, I want to know if it's possible to solve the problem without having to resort to splitting it in half, i.e. by using the full picture instead.

I don't think you can do that. If you consider the entire ladder as you system and you draw a FBD for that, then the internal forces will cancel each other according to Newton's 3rd Law. I also note that your solution ignores the force that the right leg exerts on the left at the tip where the two legs meet. You got the right answer coincidentally. The correct way to do this problem is first to draw a FBD of the whole thing and deduce from that that T = W/2. Knowing that, you draw the FBD of the left side and put in all the forces including the ones I mentioned. The torque balance gives you the correct answer if you calculate torques about the point where the legs meet. Knowing that you can proceed to find the horizontal and vertical components of these forces from the two force equations.
Log in or register to reply now!