What do they "eat" besides our flesh, flesh eating bacteria

Are all animal groups equally susceptible to the flesh eating bacteria that has been in the news lately (is Google news just trying to freak me out)?

Are there any known large scale human or animal die-offs because of this bacteria?

Are some countries hot spots for infection from this bacteria

I guess a lighting strike will more likely get me first?

One more thing to worry about

Spinnor said:
is Google news just trying to freak me out)

Google news only shows what you previously researched, so what are you trying to search?
Spinnor
Gold Member

lekh2003 said:
Google news only shows what you previously researched, so what are you trying to search?

I always click on a story about flesh eating bacteria, sick. They are just giving me what I want then.
jim mcnamara
Mentor

Example of 'flesh eating bacteria':
Prevotella melaninogenica is a gram-negative, obligate anaerobic, coccobacillus. It is commonly found in the oral cavity of humans. Sometimes they are also found in other areas of the body where they can act as opportunistic pathogens. Prevotella are often all over your face and neck. You nick yourself shaving, the bacteria gain entrance, nothing happens to virtually everyone. The frequency of flesh eating bacterial invasions is incredibly low. The reason you hear about it is there are vast number of humans. So, in the US with 300+ million people, an infection rate of 1 in 107 is still more than one infection per month.

My wife got this condition, she survived after 6 weeks in the ICU. More than 90% of the time (in 2002) these kinds of opportunistic infections are fatal. That is why they are in the news.

Rare and deadly == great news article. Plus, you can often see the "infection front" moving very slowly under the skin. Scary, to say the least.

Humans host literally dozens of bacterial species like this. They are good citizens when they are in their home neighborhood, tissue-wise. If this were caused every time we cut our skin, the Homo genus would have long ago gone extinct.
BillTre
Science Advisor
Gold Member
2022 Award

@jim mcnamara:
Are these bacteria antibiotic resistant?
Are they in some other way difficult to treat with antibiotics?

In general, stressful situations will reduce immune system functions, short term and long term. Think of allocating resources to the most immediate need.

How that might related to the sizes of environmental bacterial populations, I don't know.
Spinnor
Gold Member

jim mcnamara said:
My wife got this condition, she survived after 6 weeks in the ICU. More than 90% of the time (in 2002) these kinds of opportunistic infections are fatal. That is why they are in the news.

I am glad your wife beat the odds after losing to them!

I will though be more careful with cuts in the future.
jim mcnamara
Mentor

The pathogen attack is a really huge insult to the patient. The correct name for this disease is necrotizing fasciitis. You can do a technical search using this term.
A start:
https://www.medicalnewstoday.com/articles/7884.php

Are these bacteria antibiotic resistant?
Are they in some other way difficult to treat with antibiotics?

No, they do respond. The problems are many, here are a few:
1. massive exponential growth rate of pathogens
2. organ failures from bacterial toxins
3. patients go into shock.
4. patients who survive the surgery have severe post surgical challenges - like a greatly increased likelihood for life threatening problems like ARDS (Adult respiratory distress syndrome)

Treatment is massive surgery to debride damaged tissue if possible, and then try to debride active growth areas in tissues. Generally this tissue is underneath the skin, where there are no physical barriers to bacteria colonizing new tissues. Hence the name fasciitis.
Large doses of antibiotics. There is a race between patient survival and serotyping the pathogen to get the best possible antibiotic into the patient at appropriate titers. Mortality really high - as I said circa 90% mortality.

That seemed high, looks like closer to 51 in 323 million or 1 in 1.6E7. So the threat of death by this bacteria is on par with death by lightning strike.
jim mcnamara
Mentor

For the more worried:
https://www.cdc.gov/features/necrotizingfasciitis/index.html - if you catch the problem early on, survival is more likely.

FWIW: you should worry far more about dying from influenza, traffic accidents, falls, and a lot of other more mundane causes, long before you worry about Necrotizing fasciitis. IMO, this kind of altered window on human health problems is engendered by journalists trying to boost readership. Nobody wants to read about another traffic fatality in NYC. A thoroughly jaded readership wants the kind of stuff you used to see in B horror movies in the 1950's. Sort of come true. So we get: Bacteria that turn people into hamburger == 'flesh eating'. Not terribly accurate but suitably close, and more importantly, horrifying!
Evo
Mentor

It can be devastating

Just the other day

When Sara Hebard’s 8-year-old son suffered a minor injury after falling off his bicycle, she never expected her boy would be fighting for his life just days later.

Just as he’s done so many weekends before, Liam Flanagan spent January 13 playing on his bicycle in the driveway of his family’s home in Pilot Rock, Oregon. But as he was careening down the hill that Saturday, Liam crashed into the dirt, and his bike’s handlebar cut through his jeans, causing a deep laceration on his thigh.

He was quickly taken by family to a nearby emergency room, where doctors gave the second-grader seven stitches to close his wound and sent him on his way. Though the cut was painful, doctors felt it was minor enough not to give Liam antibiotics, Hebard says, and they fully expected for him to recover. Still, Hebard said her son kept complaining about a continuous ache around the area of his gash in the days that followed.

“He said it hurt, but it was his very first accident and he never had stitches before,” Hebard, 37, tells PEOPLE of Liam, who she says always had a smile that made others smile. “I don’t think he was complaining any more than other kid would when they had their first stitches.”

jim mcnamara said:
if you catch the problem early on, survival is more likely

But the early symptoms are common ailments like a fever and bruising. I guess you need to connect the dots that if you get a scrap and then a fever head to the ER.

This bacteria a long side the brain eating amoeba is scary!
https://www.webmd.com/brain/brain-eating-amoeba
256bits
Gold Member

Evo said:
It can be devastating
Just the other day

That's is so sad.
Reading another report about it still gives me the jeebers.
256bits
Gold Member

Greg Bernhardt said:
Even working in your garden can be deadly!

The guys leg looks kind of scaly.
Did they give him the fish skin treatment to help healing?

Works for bears and cougars.
https://mashable.com/2018/01/25/bears-burned-paws-fish-skin-wildfires-california/#tFlrDN_QlOqx 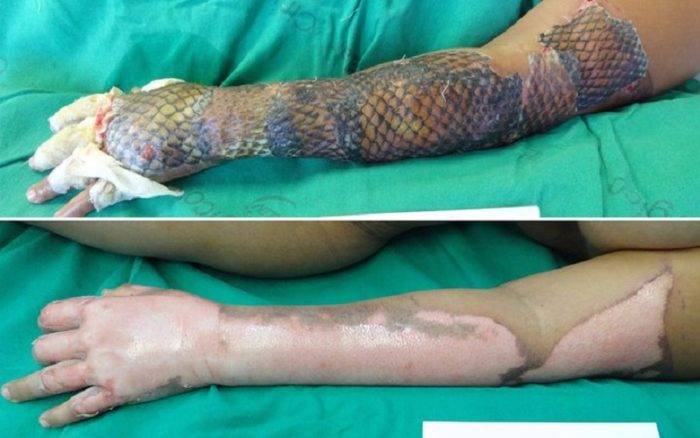 Most of the bugs that cause this infection are already living on our skin and the site of infection can give some clue as to the organisms involved, the perineum, a common site for infection has a population of mostly anaerobic bacteria, most of these infections involve several types of bacteria. I think the mortality estimates are rather high, though this depends on the speed of diagnosis, I think most estimates are in the region of 30%. The bugs involved do tend to be antibiotic sensitive, but because there is extensive tissue death the antibiotics have difficulty penetrating into the infected tissue so the mainstay of treatment is surgery to remove as much infected tissue as possible, the sooner the better. The surgical wounds are left open initially, they are often deep and extensive and may penetrate into body cavities, amputation of limbs may also be needed Putting the patient in hyperbaric oxygen soaks the tissues in oxygen which makes life very difficult for anaerobic bacteria is also used. Most people need to be treated in intensive care units, they often need repeated surgery and may need other support because of organ failure, dialysis has been used to support renal function and in the hope of removing some of the circulating toxins, some toxins can cause long term organ damage which persists even after recovery.
While its more common in the elderly and in certain high risk groups, its scary because it seems that any break in the skin can put us at risk and we carry the bugs around with us.
Share:
Share

Suggested for: What do they "eat" besides our flesh, flesh eating bacteria

How bad to eat bugs in food?

Eating based on the food pyramid vs Mediterranean and no meat

Truth and facts about eating candy, ice cream as well as junk food

Why do bacteria insert their genes into a host?

I guess soybean oil might not be so great to eat?

BBC - Our eyes can change colour in surprising ways