Why does light bend when passing from one medium to another

I know that light bends when traveling from one optical medium to another. The "classic" answer to this question is of course because the average velocity of light changes in the process. I've also seen other ways to make it "intuitive" enough to take it as a hard fact, eg. thinking of light as being like a moving train with two poles sticking out laterally so that when it hits an optical surface at an angle, a "torque"(in the sense that its direction of propagation is changed) is experienced by it. As an easy way to visualize the net effect, it is great, but it lacks any theoretical justification.
So, is there any theory that would _require_ light to bend while passing from one medium to another and thus describe this phenomenon? I know that the goal of physics is to describe the 'how' about what we observe in nature, make it easier to play with facts, more than ask why, which would be philosophizing, but is there any "abstraction" available for this problem?

s0ft said:
So, is there any theory that would _require_ light to bend while passing from one medium to another and thus describe this phenomenon?

It follows from the wave model via the Huygens–Fresnel principle: 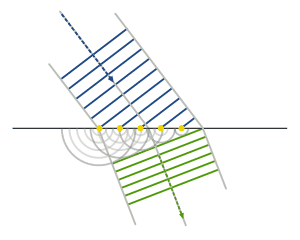 You can understand it in a somewhat different way by thinking about rays instead of waves. We know that in euclidean space (i.e. not worrying about curved-space times or the effects of S.R.) light travels in straight lines at constant velocity in a given material, which is another way of saying it takes the path of least possible time.

So, if you sit down and draw a ray coming in at some incident angle to a surface, and then ask what path it will take to some other point inside the surface, and minimize all this with respect to time, you'll find that the light bends upon entering or leaving the surface.
Bandersnatch
Science Advisor

If you have time to listen to Feynman's QED lectures he gave for non-physicists, he talks about the phenomenon from the QED perspective.

Isn't all of this happening due to the way electrons absorb and re-emit photons?
BruceW
Homework Helper

yeah. According to wiki: "In a classical wave picture, the slowing can be explained by the light inducing electric polarization in the matter, the polarized matter radiating new light, and the new light interfering with the original light wave to form a delayed wave." (which is equivalent to using some tensor form of the permittivity).

And wiki also say: "In a particle picture, the slowing can instead be described as a blending of the photon with quantum excitation of the matter (quasi-particles such as phonons and excitons) to form a polariton; this polariton has a nonzero effective mass, which means that it cannot travel at c.

Alternatively, photons may be viewed as always traveling at c, even in matter, but they have their phase shifted (delayed or advanced) upon interaction with atomic scatters: this modifies their wavelength and momentum, but not speed.[97] A light wave made up of these photons does travel slower than the speed of light. In this view the photons are "bare", and are scattered and phase shifted, while in the view of the preceding paragraph the photons are "dressed" by their interaction with matter, and move without scattering or phase shifting, but at a lower speed.

Light of different frequencies may travel through matter at different speeds; this is called dispersion. In some cases, it can result in extremely slow speeds of light in matter. The effects of photon interactions with other quasi-particles may be observed directly in Raman scattering and Brillouin scattering.[98]"

This is all on the wiki page about the photon. Sorry I have made such a big quote from it, but I think they have explained it in the best way. My attempt at a summary of what they said: We can use the quasi-particle description to use the concept of a polariton, which exists in the material. Or we can say that we still have photons, but they are being affected by interactions with the material as they move through the material.

And to be completely correct, the quantum description should be used. But I would guess that in most cases you get the right answer using just classical electromagnetism, along with a tensorial form for the permittivity. The reason that it needs to be a tensor (of order 2), is so that we can account for nonlinear changes to the electric field due to the material. In nice materials, we can just use a scalar for the permittivity, in which case the problem becomes slightly easier.
Last edited: Apr 22, 2013
s0ft

Thanks for all your replies.
I'll see some articles regarding what BruceW said about permittivity. That looks promising.
I haven't studied the electromagnetic theory of light so perhaps it'll be a struggle for me. Any suggestions?
Regarding A.T.'s reply, yeah, I think that explains it. The only thing that the model took as given was that the velocity of light in the lower medium is less than the one above it. So, thanks.
Last edited: Apr 23, 2013
mrspeedybob

Bandersnatch said:
If you have time to listen to Feynman's QED lectures he gave for non-physicists, he talks about the phenomenon from the QED perspective.

That makes so much sense it's scary! Awesome lecture!
Log in or register to reply now!

Why does light intensity decrease when light passes through a glass block?

Light -- why does it bend/refract?

Why do light form an interference pattern when passing through only one slit?

Why does light bend on refraction?

When light travels from a less optically dense medium

Why does heat pass from hot to cold?

Why does light bend while changing media?

Does a light pulse get amplified when it goes to a less dense medium?

Can sound use light as a medium to pass through?