Why does the cricket ball swing? 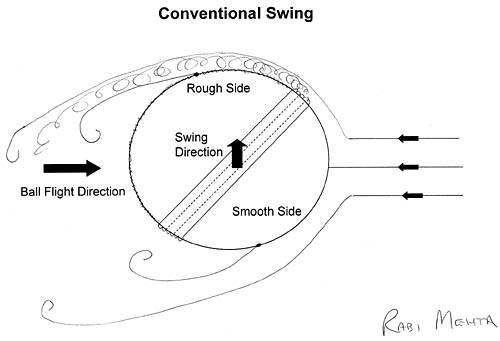 So how and why does a cricket ball swing in the conventional mode?

Let us see what happens to the flow over a cricket ball released with the seam angled (Fig. 1). Between about 30 and 70 mph, the laminar boundary layer along the bottom surface separates at about the apex of the ball. However, the boundary layer along the top surface is tripped by the seam into a turbulent state and its separation is therefore delayed. This asymmetry results in a pressure differential (lower pressure over the top) and hence side force which makes the ball swing in the same direction that the seam is pointing (upwards).

This is from an article I recently read. I have not done any aerodynamics but I'll be so greatful if anyone can explain what this guy means. What I'm thinking is if turbulent air delays the separation of air and the smooth air separates wouldn't the ball swing to the smooth side first and then to the turbulent side when that separates. Also why does turbulent air have lower pressure, in a tube if a fluid is turbulent wouldn't it exert higher pressure on the walls. Thanks guys

This tends to go against intuition but high speed air (and this is the situation where there's turbulence) has a reduced pressure compared with still air. (The Bernouili effect is described all over the place to various levels - just Google it and it will find at least one hit that will make sense to your personal taste). Hence, the ball will experience a net sideways force in the direction, as shown, of the side where there's more turbulence.
Motor vehicles experience drag, mainly due to the turbulence which is set up behind them as the air which they have pushed out of the way, starts to come together at the back. Drag is not, primarily, due to hitting the air head-on at the front.
rcgldr
Homework Helper

sameeralord said:
What I'm thinking is if turbulent air delays the separation of air and the smooth air separates ... sooner

It's a continous flow situation, the turbulent boundary layer separates further back and while moving more downwards then the smooth boundary layer. The result as shown in your diagram is a net downwards diversion and acceleration of air, resulting in the ball exerting a downwards force onto the air, coexistant with the air exerting an upwards force onto the ball, which creates the lift in the swing direction.


Also why does turbulent air have lower pressure.

Thanks a lot for all the answers Ok I so now I understand why turbulent air has lower pressure but I'm still bit confused.

1. So when the air comes in front one layer becomes turbulent and one becomes laminar, so air pushes the ball to the turbulent side.
Jeff has also mentioned that further down the turbulent layer pushes down on the air and according to Newton 3 rd law the ball
moves up. My question is wouldn't the ball move up anyway because of Bernoulli why is Newton 3rd law involved in this?
2. Also Jeff has mentioned the boundry layer and air outside is the same. Do you mean that if the turbulent layer has lower pressure
air outside that has lower pressure as well? Also I just got another question, if I get a paper and blow on top of that. The air
would move faster and it would lift but why is it that only air in the bottom pushes the paper, what about the air above the
region I'm blowing can't that push down on the paper.

Thanks again for all the help. Please excuse my poor knowledge on aerodynamics!!
Last edited: Mar 28, 2010
rcgldr
Homework Helper

sameeralord said:
Ok I so now I understand why turbulent air has lower pressure.

Turbulence of air doesn't translate into lower pressure. Turbulent or laminar air flow can both have low or high pressure.

That's because the rough surface and/or ridges trips up the air flow in the boundary layer, so that it transitions into turbulent flow.


so air pushes the ball to the turbulent side.

That's the final outcome, but it's an indirect consequence of the turbulent boundary layer, which tends to remain attached to the back of the ball longer than the the laminar flow, resulting in a diversion of the wake flow.

Bernoulli doesn't explain how pressure differentials are created and/or maintained, it explains how the air reacts once those pressure differentials exist. The root cause here is the fact that the turbulent flow exits in a more downwards direction than the laminar flow, resulting in a downwards diversion and acceleration of air in the wake (flow aft of the ball). This downwards acceleration corresponds with a force between the ball and air, the ball exerting a downwards force onto the air, coexistant with the air exerting an upwards force onto the ball. Whethere the ball actually moves up depends if the upward force from air is greater than the downwards force from gravity.


The boundry layer and air outside is the same.

The static ports that are flush mounted onto the side of a fuselage of an aircraft rely on this fact. These ports are small holes that "hide" inside the boundary layer. The holes are the ends of a pipe connected to a chamber inside the aircraft. Regardless of the airspeed of the aircraft (within reason, perhaps any air speed below mach 0.3), the pressure inside that chamber is essentially the same as the ambient air.


If I get a paper and blow on top of that.

That's a type of Coanada effect, not Bernoulli. If the paper isn't curved into a convex shape, and you don't blow below it then nothing significant happens. If the paper is curved, then beyond the peak point of the paper a void (very low pressure zone) would be created if the paper didn't rise or the air didn't descend in order to prevent the creation of a void. In order for the air to follow that curve, it has to accelarate (mostly centripetally) to follow that curve, and the air's momentum and viscosity result in a lowering of pressure while it accelerates to fill in what would otherwise become a void. The lower pressure above the paper and the ambient pressure below the paper result in an upwards force on the paper, causing it to rise. The lower pressure above the paper also draws in the surrounding air, but with the paper preventing upwards flow, the result is a net downwards acceleration of air.
sameeralord

Thanks a lot for the answers Jeff. That does make sense However I still have some misunderstanding.

Oh right so the air surrouding the boundary layer normally equalizes the boundary layer for normal pressure. Ok I think I have some sufficient understanding now. Thanks a lot Jeff, I was thinking something entirely different before
Share:
Share

Related Threads on Why does the cricket ball swing?

L
Why does a soccer ball bend

F
Why does a moving ball stop?

R
Why does a ball rebounds more over the edges?

C
How does a swing work?

Why does this skyscraper stabilizing ball work?