Batteries in Parallel, One Reverses Polarity

So, some time after getting a new car the batteries on my FOB died. So I went in and replaced them, two CR2016's was all that was needed (on top of each other in parallel). No more than a month later I noticed the battery felt like it was dying already (light not as strong, delay on the actions etc.). It died pretty soon after so I went ahead and changed them again, before I did this however I took a multi meter to the batteries, the batteries are rated at 3v, one was at some positive voltage and the other was at some negative voltage (it's been a while so I can't remember exactly). Again the batteries died pretty quickly, so today before changing them again I checked it, one battery is at +3v, the other is at -1.4v. This is completely perplexing me, does anyone have any insight as to why this might be happening?

That might be how your multimeter works,because my multimeter does the same thing to,but I am not 100% sure why this is happening.Maybe it has something to do with ground
OmCheeto
Gold Member

Is this reading of the batteries, with them removed from your fob and the probes on the exact same orientation? (IE both measurements Red probe is on the positive and black is on the negative). Just verifying the simple first.

Also a google yielded this:
https://www.batterystuff.com/blog/battery-myth-can-a-battery-reverse-polarity.html

Which is what I was thinking as well, but it happening on a fob would be a bit far-fetched. I would expect to see a lower voltage on the one good cell if this were happening. Pull out the board and check for corrosion on the back of the PCB. Some alcohol and a toothbrush may just remedy the problem.
Brett Anthony

Thanks for the responses!

The multimeter should be absolutely fine, it's under a year old and has only been used on small electronics with low voltage/amps. I'm testing both the batteries in the exact same configuration (I'll attach some images of the test for sanity's sake). I also came across that article you linked sparkie but I can't see how it could really apply here. The readings especially don't seem to make sense, I could see the one battery dying and then somehow being reverse charged by the other due to some issues with the board but having it reverse charge all the way to -1.4v while the other is at 3v (the good battery would have had to been freshly charged to well over 4.4v in order for this to happen) seems bizarre.

I didn't see any corrosion on the board but in a few days I'm going to test them again so when I do that I'll take photos of the entire device.

Minor change is that the negative battery is at -1.5v not -1.4v (I think I was losing 0.1v from holding it in my hand while testing earlier). 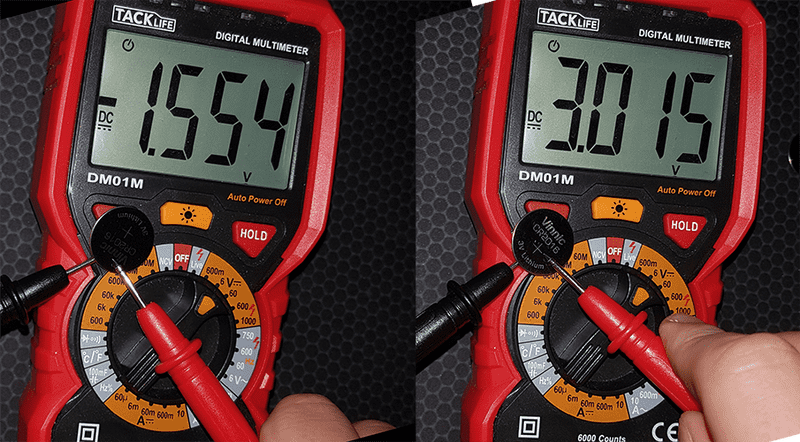 That is nuts. I have not seen that before. The thing is, in order for that battery to develop a potential in the opposite polarity, it has to have a source of charge. As that article suggests, the battery would need a reverse polarity. It also pays to remember that the potential on a battery is created due to a difference in energy. You could have a 3v nominal battery give off a certain amount of its stored energy, creating a -1.5v charge on the other battery, yet still maintain a 3.0v charge while not under load. Something is obviously wrong with your FOB, as there is an unintended path, likely through some resistance in the device, that is causing the battery to discharge in this manner when the device should be open and no current flowing.

The next step would be the take an amp reading with the batteries connected and none of the buttons pressed to verify that there is a parasitic drain on the circuit (presuming you don't just want to go buy a new FOB instead).
jim hardy
Science Advisor
Gold Member
Dearly Missed

Brett Anthony said:
So I went in and replaced them, two CR2016's was all that was needed (on top of each other in parallel)

On top of each other ? As in a stack ?
I'm having difficulty imagining how that can be anything but a series connection not parallel.

and in series they each see the same load current.

That one gets reverse charged suggests to me there's leakage around that battery
so it runs down by itself after some time
and load current further runs it down and eventually reverse charges it.
Could be as simple as a fingerprint over the gap separating top and bottom plates of the button cell
or some contamination inside the battery holder in the fob.

A clue would be is it always the same cell, top or bottom, that gets reverse charged?

I would
1. Open the fob and clean its battery holder with a cotton swab and isopropyl alcohol. Look for contamination.
Use 100% Isopropyl if you can get it, 90 if you can't.
Then thoroughly dry it with warm air from a hair dryer.
2. Get two of a good brand battery and wearing a disposable medical glove similarly clean them with alcohol and dry,
Then install them paying rigorous attention to cleanliness.

Sounds like they are in series to me. In this configuration one cell can take on a reverse charge through normal use if the condition, age, size, etc. of the cells are significantly different.
OmCheeto
Gold Member

Averagesupernova said:
Sounds like they are in series to me. In this configuration one cell can take on a reverse charge through normal use if the condition, age, size, etc. of the cells are significantly different.

I agree.
And I just ran across this at wiki as another possible cause as to why it may happen so quickly:

...In a great many forums on Amazon and similar e-commerce sites there are insistent and repeated reports of batteries that fail after a very short time...
One company has investigated Sony-branded watch and coin batteries in particular, and report that the most counterfeited include CR2032, CR2025, CR2016, SR626SW (377), and SR621SW (364).
...​
Caveat emptor.
Brett Anthony

Of course you are right Jim, the batteries are in series not parallel, I just got my terminology wrong on that one. In a couple days here I'll check them again to see if there's any drain and do all the cleaning you suggested!
jim hardy
Science Advisor
Gold Member
Dearly Missed

Wow OM good find. From that article Wikipedia cited , which is http://www.microbattery.com/counterfeit-sony-watch-batteries

good and counterfeit side by side. They'd have fooled me. 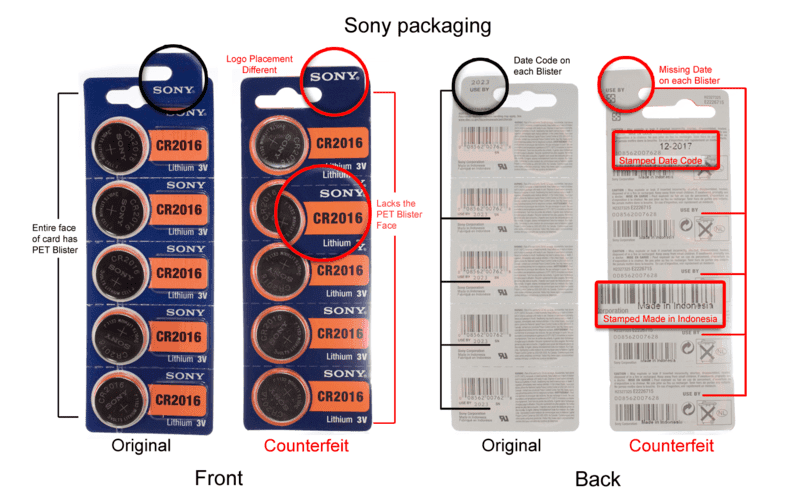 If you put in one battery that's almost run down and one that's got quite a bit of life left, the weak one will get reverse charged.

jim hardy said:
Wow OM good find.
...
If you put in one battery that's almost run down and one that's got quite a bit of life left, the weak one will get reverse charged.

I actually didn't know these newfangled batteries were susceptible to reverse polarity, which is why I googled it.
As I inferred somewhere in the past, I have no idea how batteries actually work.
I just knew that it was fun watching old school lead acid cells reverse polarity under load.

I've got 8 remaining CR2032s. Should I do a load/reverse polarity test?

I think I first ran across these new button batteries, way back around 1980.
I think they cost an arm and a leg back then.
Might be why it wasn't until about a year ago that I bought some more.

My batteries, per the back of the package stats:

Guessing from the weight, that "FOB"s, which I had to look up btw, should be very low power energy consumption devices.
jim hardy
Science Advisor
Gold Member
Dearly Missed

I bite the bullet and buy the overpriced Duracell ones off the rack at Walmart. I hope they're okay.

That'd be an interesting experiment. But it might take a month ! See discharge curves on the datasheet http://data.energizer.com/pdfs/cr2032.pdf
Tom.G
Science Advisor
Gold Member

jim hardy said:
I bite the bullet and buy the overpriced Duracell ones off the rack at Walmart. I hope they're okay.

I hope you have better luck with that supplier than my wife and I have had. We have had multiple problems with short life of batteries and reduced potency/effectiveness of medications, both prescription and over-the-counter. We have decided that anything that has the potential of a limited lifetime will be purchased elsewhere.

jim hardy said:
...
That'd be an interesting experiment. But it might take a month ! See discharge curves on the datasheet http://data.energizer.com/pdfs/cr2032.pdf

But thanks for that pdf.
I changed the url to match Brett's batteries, and it worked!

100 mAH @ 30,000 Ω
1040 hours
0.1 ma​
1040 hours is 43 days, which is about the failure time listed in the OP.
Really hard to tell, without testing, whether the FOB or the batteries are defective.
Personally, I'd buy a pair of either Duracell or Energizers for $6.
If they fail, then I'd replace the FOB. Can't imagine there's anything repairable on such small devices.

Related Threads on Batteries in Parallel, One Reverses Polarity

A
Batteries in parallel

C
Batteries in parallel with a diode

S
Batteries in parallel instead of series

A
Batteries connected in parallel - Amps won´t add up?

Add wall-wart in parallel with batteries?