Hey Yas.
I have the materials to perform a Cavendish Experiment. I understand the concepts, I understand what is being measured but I am a mathematics idiot.

What I request is someone to to just show me the equation and how to operate it in the simplest of terms. ie put the radius of the torsion bar here, put the mass of the bowling ball there, add this, divide that etc. please do not assume that I know any of the mathematical lingo. :)

again. I am not looking for someone to just solve the equation for me, I want to know how to do the equation.
Thank You!!
Last edited by a moderator: Aug 2, 2018

TjFitz said:
I am not looking for someone to just solve the equation for me, I want to know how to do the equation.
Thank You!!

They are provided towards the end of the wiki article:
https://en.wikipedia.org/wiki/Cavendish_experiment
Ibix
Science Advisor
Insights Author

Not to put a damper on your plans, but do note the amount of effort necessary to isolate the experiment from environmental noise.
TjFitz

Scott, I have done all that reading and even saw several performed examples, but in all honesty I am not fluent in reading those formulas which brought me here.

Ibix, Fully aware of the difficulties and challenges in the setup. but that's also what brought me here. I LOVE working to that level of detail and am very good at it. I am just an idiot when it comes to the mathematics.I do not possess the necessary lingo.
Ibix
Science Advisor
Insights Author

TjFitz said:
Fully aware of the difficulties and challenges in the setup. but that's also what brought me here.

Fair enough. Your list of materials doesn't include anything for isolating the setup, that's all.

The Wikipedia page gives you a formula for G and a table explicitly stating what each of the symbols means. I am having trouble working out what we can add to that. Have you seen that formula? What doesn't make sense to you? I don't think there's anything more complex than squaring something in there.
TjFitz

Ibix said:
The Wikipedia page gives you a formula for G and a table explicitly stating what each of the symbols means.

Ibix said:
What doesn't make sense to you?

I fully get the legend of items. what does not make sense to me is what to do after that. I am being as humble as I can stating that I do not understand how to proceed with performing the calculation. In my research, I found a YouTube video ( ) which kind of zaps through it but I don't get it. I am certain that for whomever this video was intended, understands this stuff like you. But I just want to do this with my son.
Ibix
Science Advisor
Insights Author

The basic plan is simple. Unfortunately, you can't do this in practice, so you have to do something more complex. But for a first stab, let's pretend you could do it.

Simple analysis
Forget about the bowling balls for now - throw them away. You only have two ball bearings on the end of a straw, suspended from its midpoint. Boring. It just sits there. I've sketched this, looking straight down from above. 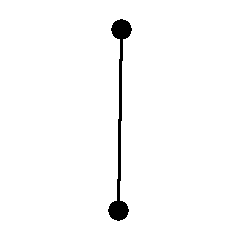 Now let's bring the bowling balls back. The gravity of each bowling ball pulls on the ball bearing near to it (it pulls on the other one two, but much less so for various reasons that I won't go into here). That will tend to make the rod turn clockwise. But it's suspended on a fishing line, and as you turn the rod the fishing line starts to twist. Things tend to resist being twisted, and they resist more the more you twist them (put your index fingers through a rubber band and then wind one finger round and round so the band starts to twist up - you'll eventually be unable to keep your fingers apart because of this effect, and the fishing line is no different, just weaker). 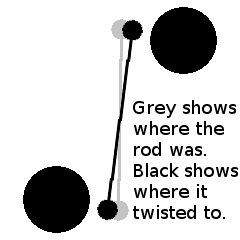 If we knew exactly how strong the fishing line was, then, it'd be job done. We'd know what force it's applying; we know this is the same as the force of gravity; we know that the force of gravity is ##F=GMm/r^2##, we can measure the distance ##r## where the balance happens and you've already quoted the masses. The only thing we don't know is G, so we could just write ##G=Fr^2/Mm## and put in the force, distance, and the masses, and we'd be home free.

Unfortunately, we don't know the force from the fishing line trying to untwist itself. Can we figure it out? Yes.

It turns out that if you take the bowling balls away again and tap one of the ball bearings, the straw will spin round a way and then spin back. The kind of mobile one traditionally hangs above a baby's cot works on this principle. But how fast the straw turns depends on how much the fishing line resists twisting. Babies' mobiles use fishing line (or some kind of thin cotton) because the resistance is quite low and they swing slowly. You could replace that with a rubber band, and the mobile would swing back and forwards very rapidly. How much the fishing line (or whatever) resists twisting is summed up in the constant ##\kappa##. If we know that, it turns out we can calculate the "untwisting" force of the string. So if we bring the bowling balls back again, we can calculate the "untwisting" force that's balanced out the gravity of the bowling balls, and we can find ##G##.

It turns out that ##\kappa## can be deduced from ##T##, the length of time it takes the straw to swing from one side to the other and back again. Once you know that, you never need to write down ##\kappa## explicitly, as it happens. So if we know ##T## then we can deduce ##G##. 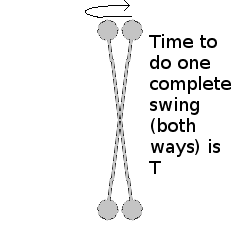 Why can't you do this
You can do this in principle. The problem is that when you bring the bowling balls in the straw will start to spin. It'll overshoot the balance point, then swing back and overshoot again. You'll have to wait years (more likely centuries) for the thing to settle to equilibrium. So you need to be a bit clever if you want to get result before your son is doing this with his kid. Or his grandkid.

Clever analysis
This is a case of turning a problem into an opportunity. As I said above, the straw is going to swing backwards and forwards whatever you do. But that's fine - you need to measure the time it takes to do that, ##T##, anyway. So bonus free measurement!

The other thing to note is that the swing backwards and forwards turns out to happen equally on either side of the point where the balance would happen. So all you have to do to find the equilibrium point is look at the end points of the swing and find the half-way point. The angle through which the rod has turned (compared to where it was without the bowling balls) is ##\theta##.

Then all you need to do is put the figures you've measured into the formula for ##G## on the Wikipedia page and you have your answer. As the video notes, probably to within a factor of a hundred or so. If you're lucky and a good experimentalist.

(I've run out of time to do more sketches - let me know if that's not clear without).

Process
Throw the bowling balls away. Hang the straw with the ball bearings on the end from something solid and isolated from drafts (see below). The straw will spin back and forth - make sure the spin is quite small, and record (photo?) the midpoint. You can also record the time it takes the straw to swing back and forwards (so to get from one end of the swing to the other and back again). This is ##T##. Now bring your bowling balls in. They need to be the same distance from the midpoint of the straw, as near as you can make it. Now record the midpoint of the swing again. It should have moved a little towards the bowling balls. The difference is ##\theta##. Note that you need to measure in radians - one radian is ##180/\pi## degrees. You'll also have to measure the distance between the centre of a ball bearing to the centre of the nearer bowling ball at the equilibrium - this is ##r##.

Hopefully you can figure out how to measure the rest on your own. Remember you need to work in SI units - distances in metres, masses in kilograms, times in seconds.

Thoughts
You might want to look up how seismometer bases are built. Seismometers are only supposed to react when the whole world shakes, not when you go stomping past in your combat boots. Basically the plan is "mount it on something heavy standing on a spring". Experience from my old experimental optics colleagues is that a motorcycle inner tube, half inflated, on top of an aluminium beer keg (or possibly four of them, one for each corner) does a good job of being the spring (it saves a couple of hundred quid compared to buying "proper" damping table legs, and you can drink the beer...).

Cavendish build a thick wooden box with a few holes in it to keep out draughts but let him see in. You can do away with the holes and use a camera inside, looking down from right above the centre of the straw, as in the video you linked. Thus you probably don't need quite the thickness of wood he used.

Repeat measurements and take the average of your results. This is particularly easy with ##T## - you can measure the time for ten back-and-forth swings, then divide that number by ten to get ##T##.

Related Threads on Cavendish experiment help for a dummy please

I Cavendish experiment to determine G

Duplication of the Cavendish experiment of 1798
2

C
Not your usual Cavendish