Really coming at this from a radio perspective, where texts refer to closed and open circuits as jargon; never defining. A transmitter sending waves to feed line lacking an antenna = open circuit. Check. A wire of little resistance errantly falling across circuit lines = short or closed circuit. Check. But how do descriptions of voltage and current apply in each case?

Everything I’m reading does not close out or connect the dots on the science with a case study - an actual example. Talking about “equal to source” and other verbiage is not an example.

Can someone state a sample case of open/short or closed circuit “as an example” stating sample voltage and current measures, and how those measures differ between cases. In other words, “In an Open Circuit, Source rated at 13 V and 1A ... would measure ... between ... While in a Short Circuit with the same Source ... would measure X V and Y A at ...”
Last edited by a moderator: Feb 20, 2020

I would venture things are even more complicated:

open is current = 0​
short-circuited is voltage = 0​
closed circuit is anything in between​
​
This is DC with perfect conductors and perfect insulation.
Would be nice if everything was black xor white but we have gray as well. Many shades.

As someone who has used these terms since time immemorial (well nearly) I would say, as BvU, they come from DC circuitry. I just amplify his description a little.

Open circuit means no current can flow. There is no continuous path round the circuit.
Closed circuit is the opposite: there is a continuous path, via whatever wires and components, and current can flow. The amount of current depends on the voltage sources in the circuit and the total resistance of the circuit.
The simple example is the battery, switch, lightbulb connected with copper wires in a series circuit. When the switch is open, you have an open circuit; when the switch is closed you have a closed circuit. 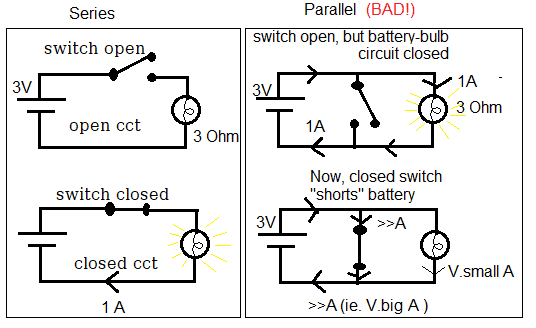 A short circuit is a bit of a misnomer, because it does not apply to a complete circuit. A short circuit between two points simply means that there is a very low (ideally zero) resistance path between those two points.
That could apply to any bit of wire joining two components of course, but that would not be at all unusual or worthy of comment. We use the term short circuit usually, when that bit of wire (or equivalent) is somewhere unusual.
In the above series cct, we would not usually talk of the switch shorting the battery and bulb together when it is closed, even though that is exactly what it does.
But in a parallel circuit, so that the bulb was on when the switch was open circuit, then when we close the switch the bulb goes out because the switch shorts, or short circuits, the battery (and for that matter the bulb.)
We do not usually switch a bulb off by providing a good conductor in parallel to let the current flow unrestricted from one end of the battery to the other. I can't tell you how much the current is here: it depends on the very low resistance of the wires, switch and battery. If they truly were zero, then the current would be infinite - which is not possible. Through the bulb there is still a very small current, because the wires and switch are not zero resistance.

If, in the series cct a piece of uninsulated wire happened to fall across the battery terminals, that would do the same job as the parallel switch and short (cct) the battery.

When it comes to AC, especially RF, then it's a whole new ball game and things aren't always what they seem.
anorlunda
Staff Emeritus
Insights Author

I agree that RF is a new ball game, and it's hard to apply the word circuit at all.

I would certainly not call a radio transmitter plus a radio receiver a "circuit."

Let's refer to the non-electrical meaning of circuit. "A closed, usually circular line that goes around an object or area." In that sense, open circuit is an oxymoron.
OCR

anorlunda said:
I agree that RF is a new ball game, and it's hard to apply the word circuit at all.

Maybe we could say. . . radio waves are generated by radio transmitters and

Really coming at this from a radio perspective, where texts refer to closed and open circuits as jargon; never defining. A transmitter sending waves to feed line lacking an antenna = open circuit. Check. A wire of little resistance errantly falling across circuit lines = short or closed circuit. Check. But how do descriptions of voltage and current apply in each case?

I kind of view "open circuit" as an idealized approximation that does not truly exist.

For the most part this approximation is sufficiently accurate. For example, if you have two conductors not in contact, they will have capacitance between them, even if the wires are far apart you can solve for capacitance, it will be a tiny number, but importantly not zero. A femto farad with 60Hz? Maybe thats a zepto Amp (note I did no math), which if your load pulls 10A, I think we can agree that its safe to ignore this capacitance in that case, but its always there.

Once frequency is high enough, those "parasitic" elements do come into play, and a wire drawn in a circuit cannot exist like that, it has inductance, it has capacitance and it has resistance. If its long enough and the wavelength short enough, you can have large voltage variations across this "wire", ie transmission lines.

So that statement, transmitter sending waves down a feed line with no antenna = open circuit is not true, the transmitter will see the impedance of the feed line, if its not matched, you might start seeing reflections or nasty oscilations due to LC resonances etc.
sophiecentaur
Science Advisor
Gold Member
2020 Award

anorlunda said:
I would certainly not call a radio transmitter plus a radio receiver a "circuit."

A more adequate description could be a Distributed Circuit where the time taken for changes in Voltage or Current between points in the circuit are significant. So, for instance, the phase of a sinusoid will be different at different points in the circuit.
On any journey of learning about any topic the additional knowledge may not be compatible with the simple models that are used in the elementary stages. DC ideas do not translate to AC circuits without modification. "Jargon" is not really the right term but I can sympathise.
For instance, a short circuit applied across a transmission line will 'look like' an open circuit to a transmitter (ideal voltage source in series with a resistor equal to the characteristic impedance of the line e.g. 50 Ohms) placed a quarter wavelength from it. A transmission line has the effect of Transforming Impedances.
Joshy
Gold Member

The OP @W5VLT doesnt seem to be sure himself, he refers to RF but then talks about DC conditions. But since he is an amateur radio operator, he's probably meaning RF (AC). ? Most responses also reflect a DC stance. 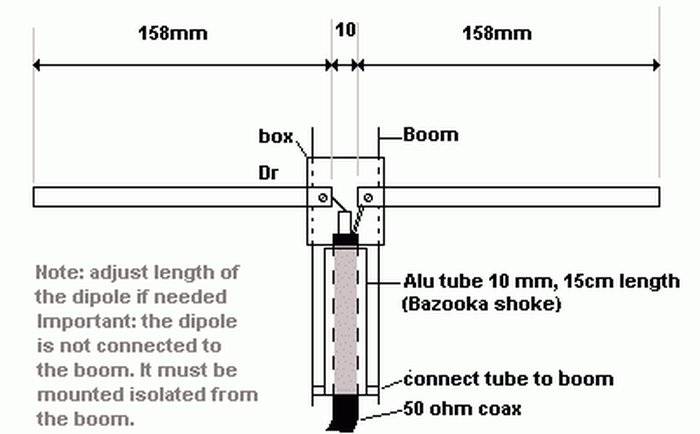 Likewise a DC short circuit of a folded dipole 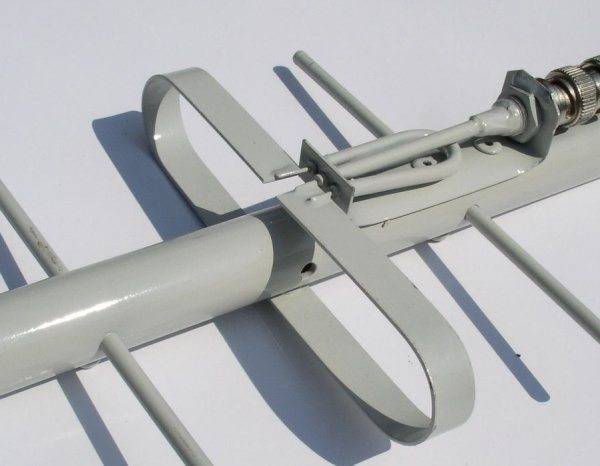 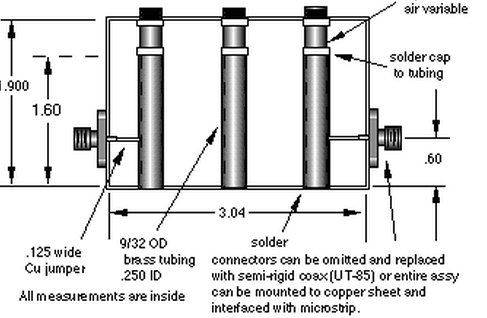 anorlunda said:
I would certainly not call a radio transmitter plus a radio receiver a "circuit."

Ohhh ?
So what are all these so called RF "circuits" I have been building all these years ?
anorlunda
Staff Emeritus
Insights Author

davenn said:
Ohhh ?
So what are all these so called RF "circuits" I have been building all these years ?

If you built a radio transmitter and to send to one or more remote receivers, would you describe those as a single circuit?
Joshy
Gold Member

anorlunda said:
If you built a radio transmitter and to send to one or more remote receivers, would you describe those as a single circuit?

If not, then do the primary and secondary of a transformer qualify? Helmholtz coils? Motor-generators? Mechanical delay lines? Capacitors?
'tis a slippery slope I fear....... and only the eye of the beholder can say for sure
davenn
Science Advisor
Gold Member

anorlunda said:
If you built a radio transmitter and to send to one or more remote receivers, would you describe those as a single circuit?

an RF link wasn't part of the original Q

We all know what we mean here and you really don't want to go down the path of examining Engineers' speak.
Share:
Share

M
Static Electricity vs Current in a Closed Circuit

Closing of an open ring