Collimation of an Electron Beam by the Anode of a CRT

Please help me in understanding the function of anode. As in image attached you see, once the electron beam is emitted from cathode and filtered by grid, it enters into the one or series of anodes. As anode is positively charged, so, to my understanding it has no electric field inside its hollow space. If the electron beam enters into this region, it should have experienced any force. Then how is beam focused? Please help me and oblige. High regards 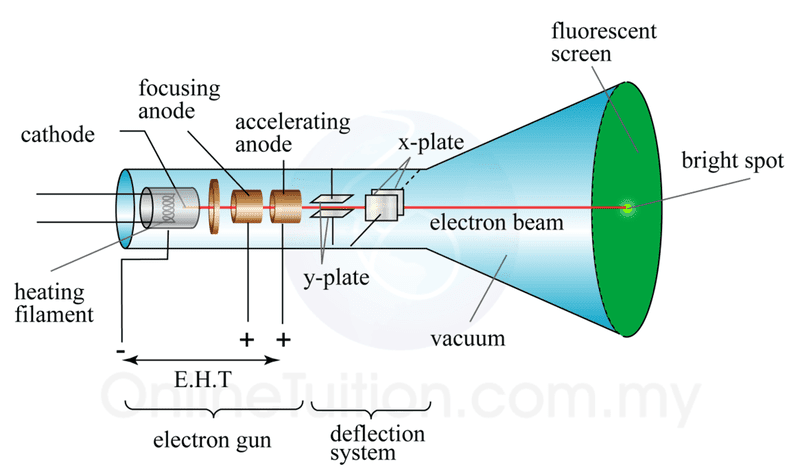 Zahid Iftikhar said:
What is the reply?

Do you want me to click on the link for you ? What is unclear in the explanation
Electrostatic Focusing System

An electrostatic focusing system is shown in figure. Electrostatic lens consists of three anodes, with the middle anode at a lower potential than the other two electrodes. 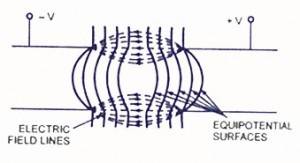 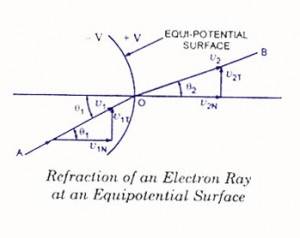 From the above expression it is obvious that equipotential surface acts as a concave lens in geometrical optics. That is why, this focusing system is named as an electrostatic lens. Now if we go back and refer figure, it can be seen that because of middle anode to a lower potential, electron beam coming from the cathode and passing through the first concave electrostatic lens tends to become more aligned with the axis of CRT and when it enters at the second concave electrostatic lens, formed between two anodes at different potentials, it is focused at the phosphor screen. Focal length of the electrostatic lens can lie adjusted by varying potential of middle anode with respect to other two anodes. Thus electron beam can be made to focus at the screen very precisely.

@BvU , something that I cannot infer directly from the article, is the electric field inside the hollow space of each anode zero (or almost zero)? So the focusing is actually happening in the two spaces in between the three anodes?
BvU
Science Advisor
Homework Helper

Where do the electrons go in a CRT

A magnetic field deflects an electron beam, but work on the beam

D
What happens when an electron is hit by a laser beam?

Does an electron beam bending lose energy by photon emission

Diffusing an electron beam throughout a chamber

S
The KE of an electron accelerated by an electric field

Magnet vs CRT TV a.k.a question about magnetic poles of electrons