Cooling System-What is the main purpose of the Compressor 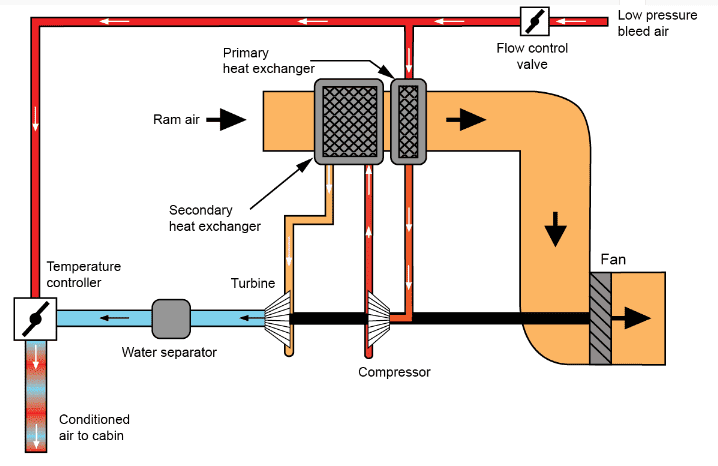 Hi There, Can anyone please help with the attached diagram of a cooling system?
In particular the role of the compressor. I understand what happens at each stage but I am keen to understand why.
The Hot Airflow passes the Flow Control Valve and some passes through the Primary Heat Exchanger. The now cooler air passes through the Compressor Increasing its pressure and temperature before then flowing through the second heat exchanger which cools the air while the pressure remains relatively constant. This Air now flows through the Turbine doing work whilst also expanding giving up some heat and pressure. (The turbine drives the compressor)

A question that I received in a practice test (Aircraft General Knowledge) was the following with the following answer which I have a bit of an issue with;

Q: In a bootstrap Cooling System, the bleed air is compressed in the cold air unit to:
A: ensure a sufficient temperature drop in the secondary heat exchanger

I don't believe this is the purpose of the compressor and as this is a Thermodynamics problem but taught at a basic level for Pilots, I don't feel those teaching it are best equipped to explain it from an engineering perspective and would appreciate getting a better explanation.

This link explains the process in some detail, https://en.wikipedia.org/wiki/Air_cycle_machine

"The usual compression, cooling and expansion seen in any refrigeration cycle is accomplished in the ACM by a centrifugal compressor, two air-to-air heat exchangers and an expansion turbine.

Bleed air from the engines, an auxiliary power unit, or a ground source, which can be in excess of 150 °C and at a pressure of perhaps 32 psi (220 kPa),[1] is directed into a primary heat exchanger. Outside air at ambient temperature and pressure is used as the coolant in this air-to-air heat exchanger. Once the hot air has been cooled, it is then compressed by the centrifugal compressor. This compression heats the air (the maximum air temperature at this point is about 250 °C) and it is sent to the secondary heat exchanger, which again uses outside air as the coolant. The pre-cooling through the first heat exchanger increases the efficiency of the ACM because it lowers the temperature of the air entering the compressor, so that less work is required to compress a given air mass (the energy required to compress a gas by a given ratio rises as the temperature of the incoming gas rises).

At this point, the temperature of the compressed cooled air is somewhat greater than the ambient temperature of the outside air. The compressed, cooled air then travels through the expansion turbine which extracts work from the air as it expands, cooling it to below ambient temperature (down to −20 °C or −30 °C). It is possible for the ACM to produce air cooled to less than 0 °C even when outside air temperature is high (as might be experienced with the aircraft stationary on the ground in a hot climate).[2] The work extracted by the expansion turbine is transmitted by a shaft to spin the pack's centrifugal compressor and an inlet fan which draws in the external air for the heat exchangers during ground running; ram air is used in flight. The power for the air conditioning pack comes from the reduction of the pressure of the incoming bleed air relative to that of the cooled air exiting the system; typical differentials are from about 30 psi or 210 kPa to about 11 psi or 76 kPa.[1]

The next step is to dehumidify the air. Cooling the air has caused any water vapor it contains to condense into fog, which can be removed using a cyclonic separator. Historically, the water extracted by the separator was simply dumped overboard, but newer ACMs spray the water into the outside-air intakes for each heat exchanger, which gives the coolant a greater heat capacity and improves efficiency. (It also means that running the ACM on an airplane parked on the tarmac does not leave a puddle.)

The air can now be combined in a mixing chamber with a small amount of non-conditioned engine bleed air. This warms the air to the desired temperature, and then the air is vented into the cabin or to electronic equipment. "
JME23

Thank you both for those links. I trawled wikipedia and couldn't find anything as relevant as those explanations.

The answer to the above question I came across in my practice test does then result in that answer given which I first doubted. The explanations given here are far more convincing than the short paragraph in my aviation textbook so I am now more than happy to accept it.. I do still have some uncertainties but I'll refrain from questioning further as that is more with the understanding of the specifics of the thermodynamic cycle related to this system and is out of the scope of that required for my exams. I'll stick that on the list of things to research in the future when these particular studies are over.

@JME23 That exact thermodynamic process was used in 1800's on board ships to refrigerate cargo. I stumbled across it in an old Marine Engineer's manual.
Back then they used reciprocating compressors driven by a steam engine, even on sailing ships. It made possible the meat trade between Europe and South America.
Your diagram is a continuous process. The reciprocating system of course worked on 'gulps' of air. But the thermo is identical.

To your question , you're right it's a Thermodynamic process.
Most simply -
we know from Thermo that a gas expands at expense of its internal energy. ( U + PV. )
Raising its pressure with a compressor,
then removing thermal energy U with the secondary heat exchanger,
leaves the air ripe for expansion through the turbine where it will cool drastically . (Follow an isentropic expansion line down air's Mollier chart..)

On the old steam driven shipboard units a secondary piston & cylinder let the high pressure air (that'd been cooled back down to ambient) expand ,
both really cooling it and helping the primary piston compress the next gulp of air. As i recall they got about -40F out of those steam driven machines.


So armed with that understanding, choose from the multiple choice answers offered you the one closest to the truth.

What is the characteristic length of a cooling fin?

What cooling effect does this system have?

T
What is the optimal gas for forced air cooling?

Water recycle system (regarding what is the CFC system)

M
What is the time constant of the cooled steel billet?

Calculation on a water cooled compressor

Purpose and function of accumulators in a pump system?

What are the responsibility of a system engineer?