On the day (or maybe the next day) the alleged coup leader was apprehended, newspapers published his "confession." A day later same "news sources" retracted it.

The alleged coup (once proven in court of law I guess) will have destroyed any chain-of-command responsibility emanating from the actions of the coup participants, for their higher-ups. Significantly, the government and the president. Anything nasty the coup participants may have done will have become the responsibilty of "rouge army units," not the rest of the army or any part of the establishment.

In other news, Turkey has declared a state of emergency for 3 months. AFAIK it can be renewed indefinitely. Simply put: fewer freedoms. Boosts executive powers, reduces judicial oversight. All residents have to carry an id card at all times and present it to authorities, who can now demand to see people's "papers" at random times and places. Police empowered to shoot on sight upon crowds, including demonstrations.
EnumaElish
Science Advisor
Homework Helper

You forgot Khmer Rouge.
From the context, I think it should have been "rogue".
Ironic misspelling, to say the least.
EnumaElish
Science Advisor
Homework Helper

Wierd consequences of the coup attempt:

* After the coup attempt all armed forces were put under lockdown. The Kurdish separatist guerillas (the PKK, considered terrorists by Turkey) have reportedly had an almost free reign since then.

* Army units used to donate leftover food to animal shelters. With the lockdown in effect, they have not been able to do so. Apparently as a result, food supplies in some shelters have become critically low.

* Soldiers that had been discharged a few years ago on the basis of accusations of plotting a coup against the government (the so-called Sledgehammer case) are being given posts recently emptied by discharges of military personnel as part of the most recent alleged coup attempt.1
_________________
1Alleged plotters of the most recent coup (the so-called Gulenists) have been accused of manufacturing evidence against defendants in the previous alleged coup attempt. The attempted coup of a few days ago would not only sever the chain-of-command responsibility for criminal liability (if any) by the Turkish military; it would also sever the judicial/administrative chain of responsibility from potential accusations of prosecutorial malfeasance such as "manufactured evidence" in the previous coup cases. However, the attempted coup would not necessarily sever the chain of responsibility for possible criminal activities committed during Turkish government's fervent support of the Syrian rebels. Ridding of that responsibility might require an even grander scapegoat, and may include parts of the Turkish intelligence services and/or the Gazze Flotilla crowd. Stay tuned for a few years, folks.

Caveat emptor - any and all of my posts on this topic are pure and rank speculation.
Last edited: Jul 24, 2016
EnumaElish
Science Advisor
Homework Helper

OmCheeto said:
You forgot Khmer Rouge.
From the context, I think it should have been "rogue".
Ironic misspelling, to say the least.

Thanks for pointing it out.
Dr Wu

It appears that the Putinisation of Turkey is now under way. . .
jim hardy
Science Advisor
Gold Member
Dearly Missed

Dr Wu said:
It appears that the Putinisation of Turkey is now under way. . .

Tug-of-War or Chess?
if he can pull Turkey away from NATO i suppose it's a good chess move
I can understand Putin being nervous about NATO missile silos in the area, and our H-bombs
we didn't want theirs in Cuba, either
Russia's ambassador said just that to Charlie Rose a year or two ago, i happened to tune in and thought "He does have a point" .

The Russians could invade Poland 'overnight' and the US needs to do more to beef up Nato defences in the area and send more missiles to the region to deter Moscow.

A 25-page document by the US-based Atlantic Council think thank says Nato needs to do more to 'counter a resurgent Russia'. 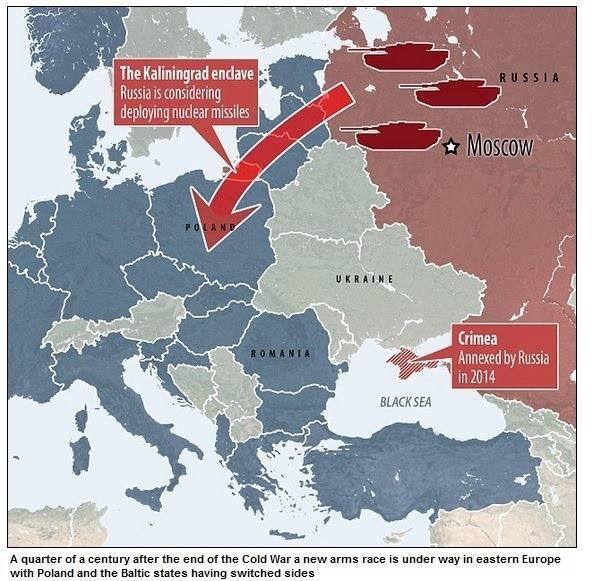 Anybody else have an opinion on this piece ? Not too long a read.
http://www.atlanticcouncil.org/images/publications/Arming_for_Deterrence_web_0719.pdf

THE THREAT FROM RUSSIA
Russian President Vladimir Putin’s regime does
not disguise its hostility toward the West and its
main institutions—NATO and the European Union
(EU). Western values such as democracy, pluralism,
transparency, human rights, freedoms, and the rule
of law are antithetical to a kleptocratic, authoritarian
regime. The Kremlin has, therefore, viewed with
undisguised alarm both recent “color revolutions”
in its neighborhood and the uprisings of the Arab
Spring.
Fearing that this is what is in store for Russia, the
Kremlin has accused the West of instigating or even
“weaponizing” those upheavals. Putin has set out to
aggressively delegitimize, discredit, and undermine
Western policies and institutions as well as the
entire post-Cold War norms-based security order.
For all intents and purposes, Moscow has declared
the West its chief enemy, as explicitly stated in
Russia’s revised National Security Strategy signed
late last year by President Vladimir Putin.

Gen. Sir Richard Shirreff was NATO’s Deputy Supreme Allied Commander Europe from 2011 to 2014. He is a partner at Strategia Worldwide Ltd. He recently published
“2017: War with Russia.”

Maciej Olex-Szczytowski is an independent business adviser, specializing in Defense. In 2011-12 he was Special Economic Adviser to Poland’s Foreign Minister, Radoslaw Sikorski. Prior to this, he served as CEO of Poland’s Military Property Agency.

Amnesty International reports on July 24 that alleged coup participants' human rights were being violated while in custody:

the sun said:
The spate of high profile suicides follows an Amnesty International report that 10,000 detained Turkish troops have been raped, starved and left without water for days.

The group claim that the detainees, who were imprisoned after the failed military coup, are being held in stables and sports halls.

Then yesterday the pro-govt. Yeni Safak claims Amnesty Int. is "on the side of the coup" *because* it defended the rights of the [alleged] coup participants.

S
News Has there been a coup?