Although I understand the derivation of boundary condition in case of steady electric current but I did not understand, that the electric field which is in direction of J current density which is generated from permanent potential to have a current in a conductors that is applied between two conducting medium so that the direction of the electric field should be the same as the potential applied is the same on both conductors and the value of J change due to different value of conductivity bet medium while the direction should still the same.


so i did not under stand how electric field and current density change direction although the source that applied on two conductors is the same ?

my question what if the field like i draw why the direction of current change although the same source should make the current,electric field in both conductors in the same direction 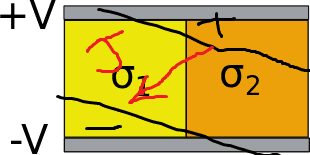 Why is the drain current steady after pinchoff in a JFET?