This is not homework. This problem has been made by me. One day ago, I asked help about how to determine the direction of velocity if force act with velocity at right angle. After asking help, some comments helped me to give some better idea. Then I made this problem with some values to realize that fact easily. But I found some problems for which I want to post this mathematical problem at this site. If it is necessary, please edit this post as necessary.

Here we will try to solve two mathematical problems related to centripetal force. This two problems are interrelated to each other. Suppose, a particle is travelling through a circular path with uniform value of velocity. Assume that, value of velocity, v= 4 m/s, mass of particle, m= 2 kg, radius of circle, r= 2 m. Hence by calculating we get the value of centripetal force, F= 16 N, acceleration, a= 8 m/s², angular frequency, w= 2 rad/second.

Nousher Ahmed said:
As a result, along X axis, the value of initial velocity is 4 m/s, and along Y axis, it is 0.

Nousher Ahmed said:
After 2 seconds, the value of velocity along Y axis will be 16 m/s.

I suspect PWiz is correct. eg You misunderstand the effect of acceleration.

Ok so point A is at a position similar to that shown in my drawing (eg where X is changing but Y isn't). 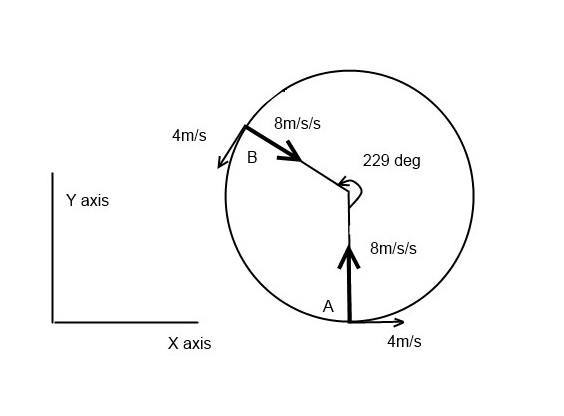 No. That would only happen if you stopped the object at point A and applied a force that accelerated it vertically. That's not what's happening. The object is constrained to move in a circle. At point A the X component of the velocity might not be changing but it isn't zero.

I think you need to remember velocity is a vector that has components speed and direction. In the case of uniform circular motion the speed is constant but the direction is changing. We only really say it's "accelerating towards the centre" because ANY change of velocity is an acceleration. An acceleration does not imply a change in speed, it can (and does in this case) mean a change in the direction component of velocity.
Share:
Share

Suggested for: Finding angle of velocity

Finding Velocity given angle and distance.

Finding velocity after displacement, and an angle

Finding Velocity at impact of a projectile motion with an angle

Finding height and time from angle and velocity