Dear All,
I have a problem in understanding how the harmonic currents exist in a load with no corresponding harmonic voltages?
The following figures with questions under explain what I mean 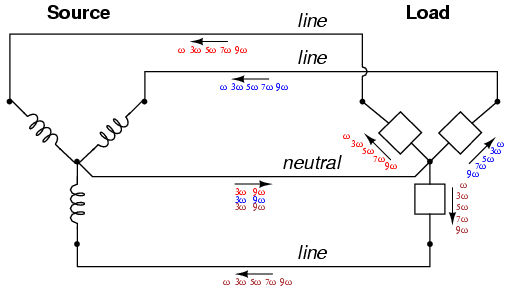 This understood figure no issues about. 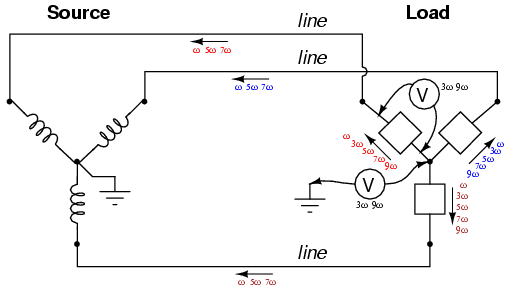 In above figure, 2 question arise::uhh: 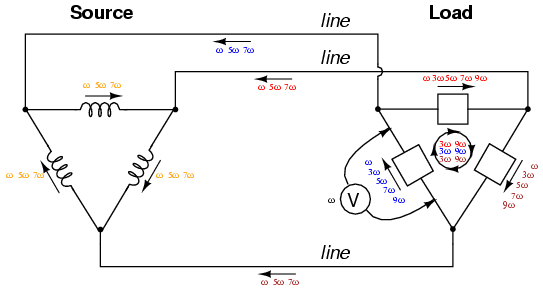 How is the phase voltage missing all the harmonics while it's present in current.
Correct me if I am wrong: we can say that because triplen harmonics are in phase they cancel each other in the line cuerrent

How the line currents are missing the triplen harmonics

3rd harmonics are in phase as you noted.

Therefore third harmonic voltage cannot be produced between phases of a wye machine.
In your fig2 write KVL between any two phases and observe 3rd harmonic in one phase cancels the 3rd harmonic from other phase.

Since there's no 3rd harmonic phase to phase voltage and your load is connected phase to phase, that harmonic has no voltage to drive it. So with nothing to push it, that current cannot flow. (assuming linear load).
Another way to think of it is - since third harmonic current is in phase, it'd be coming out of all 3 phases in synch. How would it get back to generator to satisfy KCL ? Kirchoff's Current Law shows it could only return through neutral which has a high impedance volteter in it, so no current flows there. It is blocked by absence of neutral connection.

But if you replace that voltmeter with an ammeter it will indicate substantial 3rd harmonic current because each phase of load is in parallel with a phase of generator and 3rd harmonic voltage DOES exist phase to neutral. It can return via a neutral connection if one exists, like it would with an ammeter there.
That's why you have to be careful connecting a small 3 phase transformer to a large three phase source - what's insignificant harmonic content to the source might be real significant to the poor little transformer.

Sorry - i dont see that indicated on your fig2.

Re last figure, which is unnumbered:

How is the phase voltage missing all the harmonics while it's present in current.

That one's kinda sneaky.
Look at that delta source . The three phases comprise a series connected loop. Since 3rd harmonic voltages are all in phase, they do not add to zero as does the fundamental.
So what you have is a short circuited supply for 3rd harmonic. 3rd harmonic current will flow around that delta winding in amount E3rd/Zmachine and the vast majority of the 3rd harmonic voltage is dropped across the machine's internal Z.. So your 3rd harmonic basically all stays in the machine.
But i believe the 5th and 7th would appear in phase voltage.


Correct me if I am wrong: we can say that because triplen harmonics are in phase they cancel each other in the line current

Again - without a return path they can't come out all 3 wires at once so they're blocked. Only place they can flow is around a delta winding.
I think the point of the exercise is probably to demonstrate that a delta winding shorts out third harmonic voltage effectively removing it. It'll clean up a sinewave for you.

hope this response triggers a bettre one from a genuine power engineer. I'm a lowly instrument guy.
mnada