Impact of heat on most classical physics problems

Hello, i am not an expert in physics (i am a computer scientist) but i have a lot of interest in physics, still there are some questions that i cant seem to answer given my limited amount of knowledge in physics (i had only 1 classical mechanics subject in university, although i try to learn a lot by Reading).

The topic that is troubling me the most pertains to the release of heat in almost every reaction or event in nature. In every single physics class i had, heat release was always ignored, professor simply said stuff like "these two bodies colide, the collision is not perfect because heat gets released, still it is something that we can ignore...", or "the body is sliced in two by the knife, some heat gets release through friction between the knife and the object you are cutting, but in the end the object gets sliced into 2 parts, heat release can be ignored".

Although it may seem intuitive, and i actually accepted the fact that the heat released in most collisions, object falls, and so forth was negligible, i am not starting to question the impact that it may have on the long term. I mean, consider that i am moving myself from one point to another, as in the following figure: 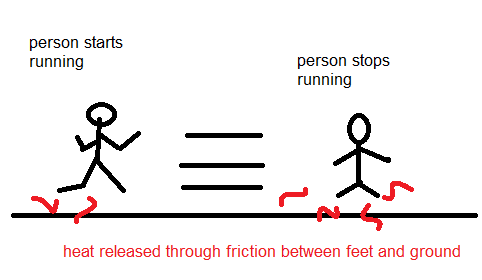 Heat will inevitably be released throughout my movement, i cant believe that when i move myself from point A to point B my position in space will simply change and that's it, that is not correct since heat will be released, and even when i stop moving and both my particles and the ground particles stabilize and reach 0 momentum, the release heat photons will cause other effects like a raise in temperature or even trigger some bigger event (what if the photons reach a pile of dynamite?). Given such, i concluded that even if i move back to my original position, the system wont be on the initial conditions anymore, since my movement backwards will only cause my body to use more internal energy and produce even more heat, hence i cannot return to the original conditions, something that most professors made seem possible because the problema was handled as a simple linear momentum problem.

Therefore i also wondered, could it be possible that there is also some "conservation of system state" law? Like if the released heat will somehow cause a chain of reactions that will eventually cause the system's original state to be restored through a complex chain of reactions triggered by the released heat? We would then be in the presence of a looping universe. Is that possible? I wonder if it could also be the case that if i dodged a bullet, the bullet would hit something and then cause a chain reaction on the universe that would eventually cause me to suffer the same fate as if i had been hit by the bullet.

I also considered other similar situations, like the collision between two bodies: 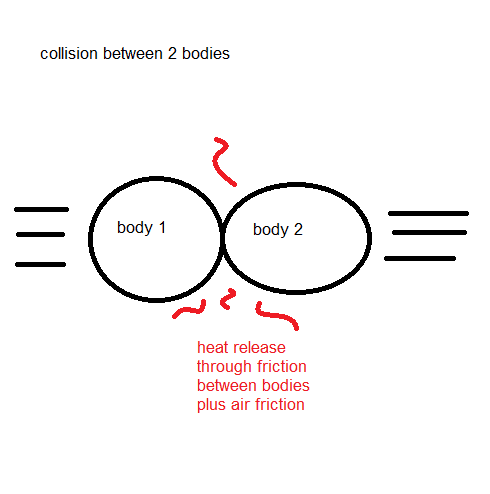 My professors always handled this as a problem of momentum conservation, still that is not enough to fully measure the consequences of the collision due to the heat release, and the same also applies to the falling body problem: 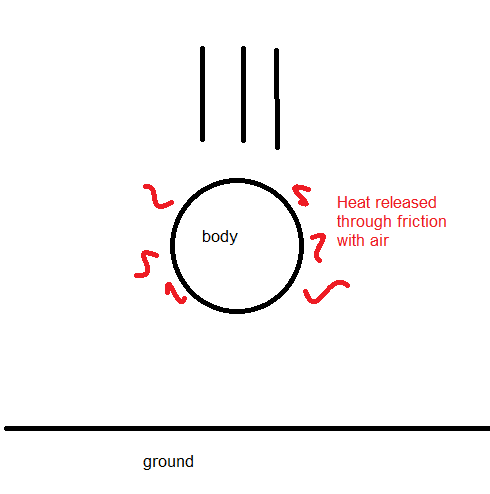 In this problem things are not as simple as the conservation of mechanical energy, heat is also released and may trigger unforeseen events.

I know i may be getting a bit too much obcessive about this subject, but these doubts seem to have some logical support. It seems weird that whenever i perform any action on my everyday life, like speaking, moving, etc i am releasing heat that may trigger unforeseen events.

Do you physicists ever think about these concerns? How can we cope with a life where we cant predict the effects of our released heat?

We can attempt predictions of the consequences by quantifying the heat produced. So for the usual cases where it can be 'safely ignored', you will understand that the triggering of unforeseen consequences (though true) is likely to be insignificant. Simple examples of significant heat produced would include lighting a match, the application of brakes on a car, or drilling a hole in a wall to fix something. You can burn your skin in all the above cases if you are careless. That seems both significant and predictable.
russ_watters
Mentor

You've discovered the second law of thermodynamics. In some cases, the loss of heat can be ignored, but in a great many, it cannot and indeed you can never truly return a system to its initial state without an external input of energy, because of it.
Chestermiller
Mentor
Insights Author

As Russ has indicated, most of the questions you are asking are addressed in a course in Thermodynamics. Also, the dispersion of heat from a source to the environment is covered in a course in Heat Transfer. You seem to be craving the material that these courses include. So, sign up.

Related Threads on Impact of heat on most classical physics problems

What advance in Physics have had the most impact on history?

I Tech Impact of Solutions to both Millennium Physics Problems

I How Engineering physics impact on technology?

Most interesting WEB pages on physics