In which direction does the friction on the wheel go? 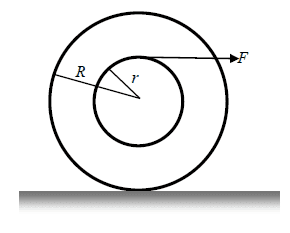 The following wheel consists of an outer ring (R) and an inner ring (r). The wheel moves clockwise by a force F applied to the inner ring as shown in the picture to make the wheel roll.
Draw the friction force.

However my facit shows that the friction force is to the left: 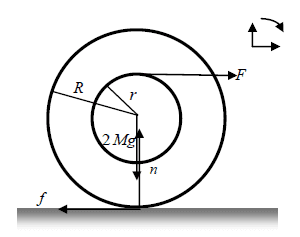 http://[URL]http://i.imgur.com/l2ZjUNO.png [Broken]
Isn't this wrong? Shouldn't the friction force be drawn in the opposite direction? Or am I misunderstanding something here? (ignore the gravity and normal force in the drawing)
Last edited by a moderator: May 7, 2017

The applied force F is causing the wheel to move to the right so the friction force f opposes that hence it points to the left.

Maybe this explanation will help:

jedishrfu said:
The applied force F is causing the wheel to move to the right so the friction force f opposes that hence it points to the left.

Maybe this explanation will help:

Oh I see. If the situation was where the wheel was standing at rest and didn't move then the friction force would be to the right to prevent it from rolling but since the wheel is rolling that means our friction force is to the left, correct?
jedishrfu
Mentor
Insights Author

In analyzing problems, you can draw vectors in the wrong direction and still do a valid analysis if you interpret a negative magnitude as telling you that the direction of the vector is opposite to the way you drew it.

PhyIsOhSoHard said:
if the wheel is turning clockwise as it moves, then the friction between it and the ground is drawn to the right

That suggests a misunderstanding that I don't see corrected in any of the posts so far. If it were merely rolling at constant speed, there would be no need for friction at all. But the unbalanced applied force implies that it will be accelerating, and that is why there may be a friction force at all.

As to which way it points, unless I've blundered, there's not enough information to decide. It will depend on whether the moment of inertia of the wheel is more or less than mRr.
Share:
Share

Related Threads on In which direction does the friction on the wheel go?

In which direction does static friction point?

In which direction does the current flow?

D
Which direction is the average acceleration going?

D
Which direction does the normal contact force act?

Which way does the electric field go in this question?

Friction in the Direction of Motion

Which force does friction counteract on an inclined plane?

Friction on the wheels of car

L
Find the direction in which slope is the steepest