Write the KVL Equation for the outer loop 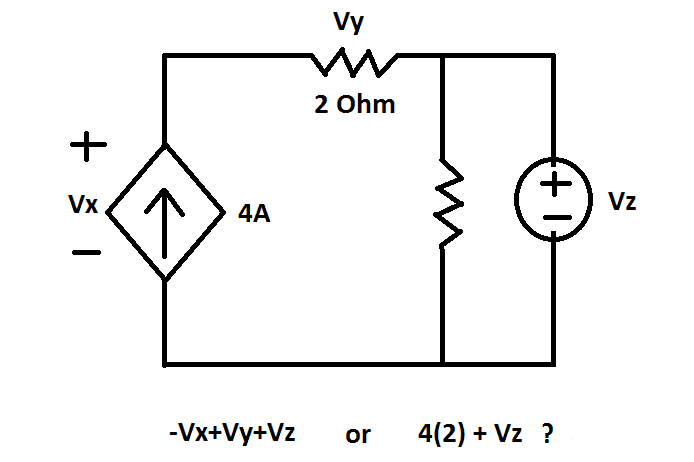 The question above is a sample I have made for such a condition. The goal is not to find the value, but only write the correct equation. If an independent current source is connected in series with a resistor, should I write the voltages across the resistor and the current source separately in the KVL equation or should I simply apply Ohms law V=IR and write the result in the KVL equation?
The first equation that I have made is -Vx+Vy+Vz=0. The other equation that I have made is 4(2)+Vz=0, where 4(2) is the resistance of the resistor multiplied by the current of the independent current source. Which one of these is the right one?

All in all, this is an EXTREMELY silly circuit from a practical point of view but does demonstrate some interesting things.

Write the KVL Equation for the outer loop

I like to see voltage arrows across components before forming or confirming KVL equations.

The voltage arrow belonging across both sources is apparent from the + and - signs on each, though nevertheless it is still helpful to draw in each arrow. How you draw the arrow for Vy determines the sign it has in the KVL equation. It is not always going to be "obvious" which way the voltage arrow should point.


The first equation that I have made is -Vx+Vy+Vz=0.

Related Threads on Independent Current Source In Series With Resistor

Current source in series with resistor

Two current sources in series with a resistor.

Power over current source and resistor in series

I
Is the source in parallel or series with the resistor?