Is this officer checking his radar gun calibration incorrectly?

TL;DR Summary
This confused me when I saw it on TV last night. It seems like the Ranger is aiming the radar gun at the wrong side of the tuning fork when checking the radar gun's calibration...

I was watching "Northwest Law" last night (a TV show that follows Fish & Game Rangers in the Northwest), and when I saw an officer checking the calibration of their radar gun before using it on an ATV trail, I was very confused by it.

He held it so that the tuning fork vibrated orthogonally to the direction of the radar beam, as far as I could see. I went back and watched it several times (via the magic of Xfinity cable TV), and it sure looked like it was sideways to the front of the radar gun.

I'd never seen this before, so I searched a bit on the Internet this morning, and indeed it does look like audio tuning forks are a standard way to check the calibration of a radar gun. But in the link I show below, they say to hold the tuning fork so that the thin side is toward the radar gun, which makes sense to me since that is the direction of the vibration.

Was this Ranger just making a mistake holding the tuning fork sideways? That would be especially weird, since the other Ranger in the picture is his FTO (Field Training Officer), who was checking that the new Ranger was doing it correctly.

Are there times when it's okay/recommended to hold the tuning fork so that it vibrates orthogonally to the incoming radar signal? Thanks.

(sorry for the low-quality cell phone picture of my TV screen): 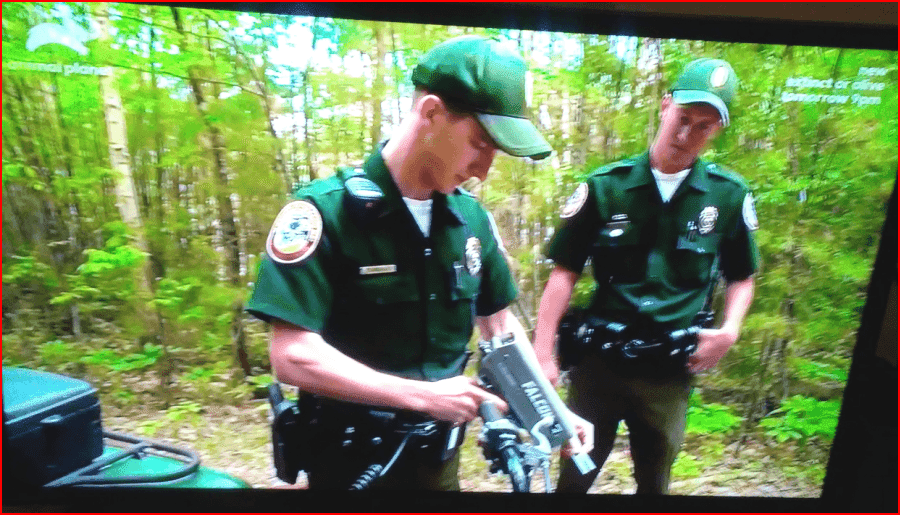 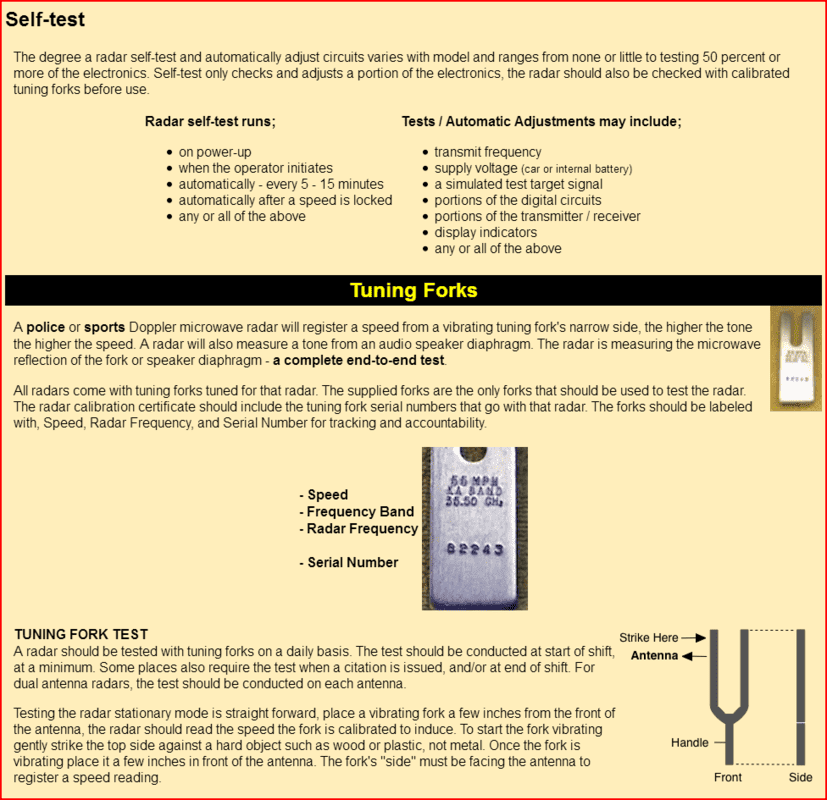 I don't have any experience with this, but it seems like you are correct.

Seeing the tuning fork (this one is labeled as "55 MPH") reminds me of a magazine article I read back in the 1970s, on how to beat speeding tickets. One idea was, if your cited speed is a multiple of 5 MPH, to ask the officer (in court) what the calibration tuning forks read. So if you are cited as 75 in a 55, maybe you can get the officer to say he has a 75 MPH tuning fork. The idea is, to break the logic that says the only way the radar display will show "75" is if you were, in fact, going 75 MPH. I'm not sure this would actually do anything other than irritate the judge, but it is how I learned about the tuning forks.
Dullard

I believe you are correct about the way to calibrate a radar gun but I suspect the unit is sensitive enough to detect the vibration even when the tuning fork is held nearly orthoganally.
Baluncore
Science Advisor

Only the tuning fork fundamental will have a high Q, an oscillation that lasts long enough to check the calibration. The clang mode can be avoided, when it is present it will appear to be a bad calibration by a factor of about 6.

But a doppler radar measures speed. The detector generates the difference frequency between the transmitted and the received rays. How come, as the amplitude of the fork falls, does the registered tine speed not also fall? That suggests the radar detector and signal processing must be sensitive to AM modulation.

"Viewing" the face of the fork would AM modulate the reflected beam as the dimensions of the gap between the tines changed.
berkeman
Mentor

Baluncore said:
"Viewing" the face of the fork would AM modulate the reflected beam as the dimensions of the gap between the tines changed.

Interesting. I wonder if that's why it gave a "false positive" test result.

I think I'll try to figure out how to e-mail the show. I think they will be responsive...
skeptic2

Simple CW doppler radar uses a diode, gated in the transmit path, to convert the reflected signal to base-band. That can measure one non-zero speed at the time. Where image rejection mixers are used the radar can separate approaching and receding targets into two channels. The signal processing then searches for the highest frequency present in the signal, and displays that as the speed of the fastest unidentified target in the wide beam.

One thing about doppler radar is that the signal processing can search for and measure the highest frequency = fastest target present in the beam, which in busy traffic must then be separated from the traffic flow. Unfortunately, doppler radar is unreliable because it is poorly understood by operators, who then confidently book the wrong target for excessive speed.

As an example, a motorcycle comes round the curve on the highway, sees the police radar and so decelerates from 160 km/hr to the speed limit of 100 km/hr. In court, one judge, with two policemen, beats one bike-rider every time. But the rider claims to have always been traveling at 100 km/hr; well he would say that, wouldn't he? He is "found to be Guilty".
Unfortunately, the alloy spokes at the top of the front wheel of a motorcycle are also a target. When viewed diagonally, they really are doing 160 km/hr, while the bike is really only doing 100 km/hr. Alloy spokes often have a cruciform section that makes an excellent corner reflector as they rotate forward at the top of the wheel. The top of the spokes are not directly visible from the front as they are behind the rim, hence the illusion of slowing down while rounding the bend.

That is just one of many situations that has lead to the phase-out of doppler radar in my state. We are now targeted by laser distance measuring equipment, with a very narrow beam. The new systems take three reflection times, then computes two speeds from the distance and time differences, which verifies the speed estimate.
trurle

skeptic2 said:
I believe you are correct about the way to calibrate a radar gun but I suspect the unit is sensitive enough to detect the vibration even when the tuning fork is held nearly orthoganally.

"Incorrect" fork position would result in additional attenuation of modulation of reflection by up to 20dB (~100 times). Typical radar receivers at point-blank range have dynamic range margin above 80dB (100,000,000 times), therefore angle of fork during test is not important at all.
.Scott
Science Advisor
Homework Helper

Interesting. Unlike the radar I work with, these units must put out a CW signal at a constant frequency. Then they must then do a straight Doppler frequency to speed conversion. So the tuning fork generates the frequency in the mixer that corresponds to the specified speed.

The radar units that are used for Advanced Cruise Control, Blind Side Detection, etc. are far more sophisticated. They use linear frequency modulated chirps, not a simple CW transmission. A tuning fork would be unable to spoof a speed - but perhaps it could spoof a range. I will have to bring a good tuning fork to work to see if that can be done.
sirius0

Perhaps a boring reason like the officer is eyeing the fork to see when the initial chaotic clang vibration has dropped; then he turns it side on. Also it is media so "Oh the picture doesn't look so good that way just turn it a bit... There that's better!"
sirius0

sirius0 said:
Perhaps a boring reason like the officer is eyeing the fork to see when the initial chaotic clang vibration has dropped; then he turns it side on. Also it is media so "Oh the picture doesn't look so good that way just turn it a bit... There that's better!"

Perhaps they turn it this way and that and accept the best result to eliminate angular effects in how it is held?
Baluncore
Science Advisor

.Scott said:
They use linear frequency modulated chirps, not a simple CW transmission.

With a CW fixed frequency, the product of the transmitted and reflected signal is a tone, with a doppler frequency dependent on the relative speed of the target.

With a linear chirp, the product of the transmitted and reflected signal is a tone, with a frequency dependent on range, not on relative speed. But there will be a ranging error due to the relative speed of the target reflector to the radar, as the doppler frequency offsets the received range tone. That should not be a problem with clearance in flowing traffic where differential velocities are small.

A tuning fork very close to a chirp radar should provide a false range reading that appears to be at a greater fixed distance.

Let us know what you find.
berkeman
Mentor

Whelp, I tried posting the question on the Lone Star Law facebook page, but it's not visible yet. Maybe it needs to be approved first by their Mentors. So strict! 😉

It has legal implications to that case, and to all others, as it questions the basic calibration procedure.
They will need to get a legal opinion.
mfb
Mentor
Insights Author

Baluncore said:
But a doppler radar measures speed. The detector generates the difference frequency between the transmitted and the received rays. How come, as the amplitude of the fork falls, does the registered tine speed not also fall? That suggests the radar detector and signal processing must be sensitive to AM modulation.

It measures speed of normally moving objects, but oscillating distances can trick it. A tuning fork with an amplitude of 1 mm at 450 Hz moves by just ~1 m/s, and as you notices this speed changes over time. But it will make the interference pattern oscillate with 450 Hz independent of the amplitude.
Share:
Share

Suggested for: Is this officer checking his radar gun calibration incorrectly?

When does the calibration uncertainty contribute to a measurement uncertainty?

How did Galileo manufacture his telescope?

Is Specific impulse indicative of performance as a gun propellant?

What is wrong with this picture?
2

Is this the Steering Tie Rod?

Is this still an equivalent force?