So I guess what I'm asking is, aren't these paradoxes in special relativity pointless if the questions depend on which object experienced an acceleration?

Acceleration can be described with special relativity. You need some calculus, but nothing harder than that.

Acceleration is absolute - "it is accelerating" is enough, unless you have explicitly invoked accelerating coordinate systems, which you haven't.
ghwellsjr
Science Advisor
Gold Member

TysonM8 said:
The ladder paradox can be resolved when considering the relativity of simultaneity.

But the key is to define the scenario in terms of one Inertial Reference Frame (IRF) and then use the Lorentz Transformation (LT) process to see what it looks like in another IRF. You can't just bypass the LT process and jump to a conclusion about what the scenario would look like in another frame.

So let's see how that works. Here is a spacetime diagram for the rest IRF of the red barn. It shows the two ends of the barn in red separated by a distance of ten feet. The two ends of the ladder (which is also ten feet long in its rest frame) are shown in black. The ladder is traveling at 0.6 feet per nsec (0.6c). The dots mark off 1-nsec increments of time. I'm defining the speed of light to be 1 foot per nsec.

Soon after the ladder gets fully inside the barn, both doors close simultaneously in the rest frame of the barn and then re-open 2 nsecs later. This is shown in blue on each end of the barn: 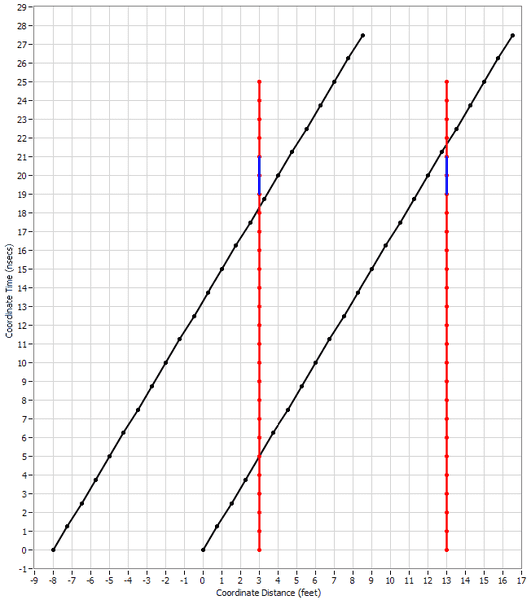 Now we transform the scenario to the rest IRF of the ladder using the LT process which is an IRF traveling at 0.6c with respect to the original defining IRF: 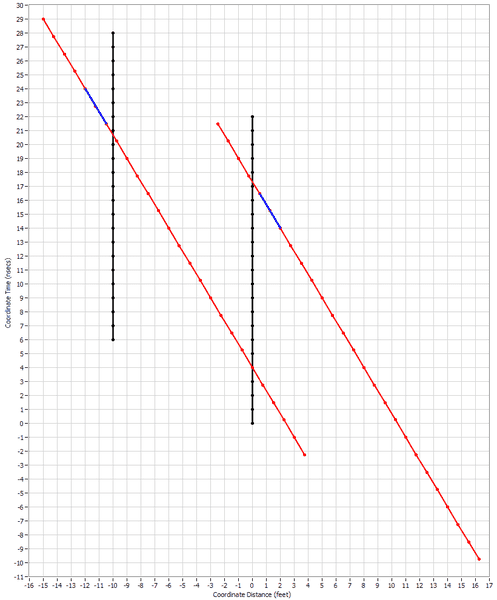 Note that the time intervals during which the two doors are closed (shown in blue) do not overlap as before which represents the relativity of simultaneity that you mentioned.

So I guess what I'm asking is, aren't these paradoxes in special relativity pointless if the questions depend on which object experienced an acceleration?

If I understand you correctly, you are saying that since the Length Contractions are symmetrical between relatively moving objects, why isn't it the case that considered from the ladder's rest IRF, the barn is contracted and therefore the ladder can't fit inside the barn with both doors closed? And you're right. You may be thinking of something like this: 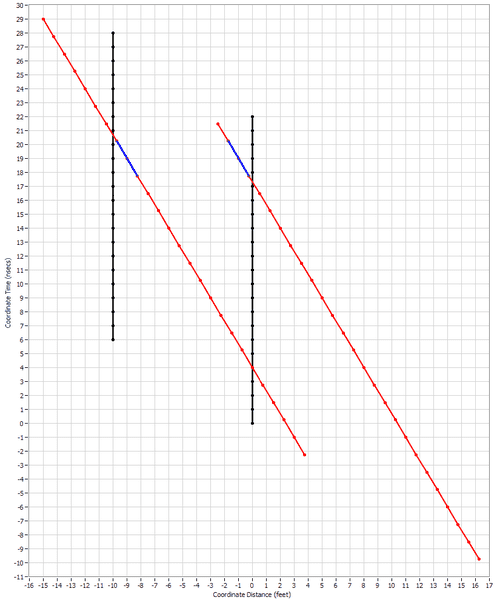 I have drawn in a blue time interval during which both doors are closed at the same time in the ladder's frame and clearly both doors close on the ladder.

But to make it even more obvious, we can transform this scenario from its defining frame into the rest frame of the barn: 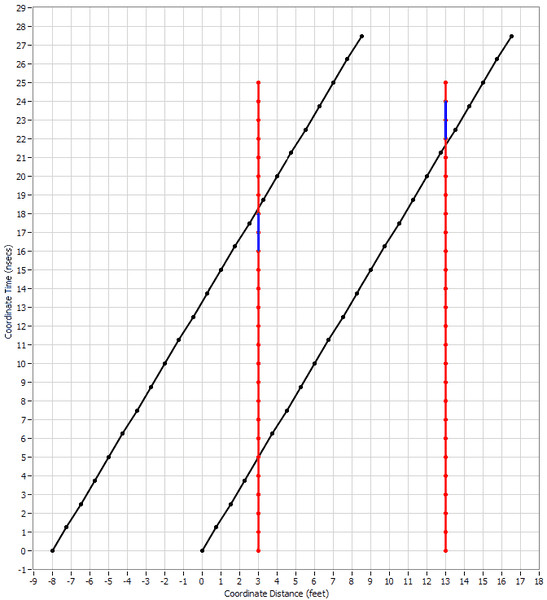 Now you can see that the front barn door closes just before the ladder gets all the way inside the barn and then later, the rear barn door closes just after the ladder starts exiting the barn. Both ends of the ladder get clamped by the doors. And if we look back at the previous diagram, we can see that there is no other time that both doors can be closed simultaneously in the ladder's rest frame where the ladder will escape being clamped by at least one or the other door, as long as at least some portion of the ladder is inside the barn.

So I think your question is, what breaks the symmetry? And the answer is simply how we define the scenario. If we start in the rest frame of the barn to define when both doors are closed, then no other frame matters. If we naively try to understand the same scenario in another rest frame without using the Lorentz Transformation, then we will invariably end up with a different scenario and possibly a presumed paradox. The solution? Don't do that. Do it the correct way starting with a defining frame and use the Lorentz Transformation to get to another frame.

I A twin "paradox" in General Relativity

I A paradox connected to General Relativity

I Bauer's Paradox in General Theory of Relativity?

B Question about a stronger relativity paradox than the twin paradox