The other morning it was misting. In the yard the nightlight glowed. Around it the pulsing AC was visible as it appeared to make small rings that moved outward directly, the observers(like an electron as it gets more excited for ex.) We also noticed that the image/rings appeared to be only two dimensional/flat, as they faced us directly. My wife and I figuured all this out rather quickly and felt kind of pround that we had not only noticed it but that we indeed could explain it, until I went to another location where I saw the same flat view.

We could explain how distance would change the amount of rings we saw but never could explain why the view always appeared to be flat! Why, we asked could we only see this linited, flat perspective?

The other odd thing was this- there is a rectangular piece of carboard we stapled to the upright 2x4/s that frame the porch (screened) and we noticed that if we put the edge of the cardboard in our line of sight to cover the 'hat' of distant, outside nightlight, the circle of light/ the rings, were being projected onto the cardboard! What aused that? Spooky. No, we don't live in CO. Thanks!

Naturestan said:
We could explain how distance would change the amount of rings we saw but never could explain why the view always appeared to be flat! Why, we asked could we only see this linited, flat perspective?

Because what you are seeing is a geometric effect of the light refracted through the mist.
It is essentially the same geometry as a rainbow.

It may be be the same effect as a rainbow, but the path from light to your eye will be identical all around the light, leading to a ring of effect, always in a plane that is perpendicular to your sight line.

This is the best diagram I was able to find that is not actually involving a rainbow and the sun. 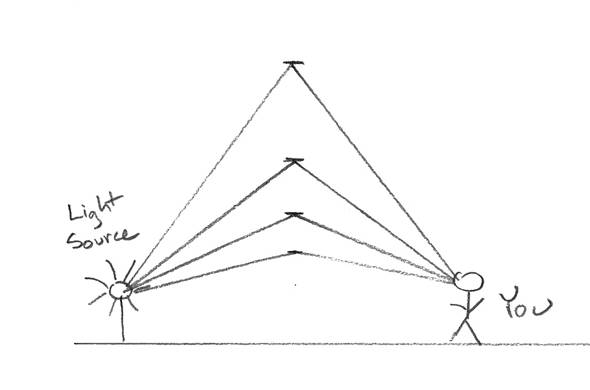 Absorbtion of light- a dillema

C
Light could destroy anything

How will the force of Light change with absorbtion/reflection?

K
How is light reflected?

Why is diffused light captured through V-shaped grooves?