Low Atmosphere Rocket Launch Stages Carry Their Own Oxygen -- Why? 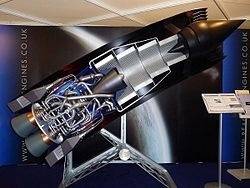 So I was wondering how come liquid rocket engines (operating in the lower atmosphere (such as launch stages)) are using Oxygen that they have packed on board. What I mean to say is why would the rocket need to waste space and mass bringing Oxygen with them in the launch stage when they could use air intakes to fuel engines with Oxygen? I do not understand why really big liquid rockets (like the Saturn V) could not fuel their lower stage engines with Oxygen from the atmosphere instead of using packed Oxygen. I guess my reasoning is that using Oxygen already on the rocket at launch is heavier than packing just liquid fuel (keep in mind this applies only to low atmospheric stages because there is an abundance of Oxygen) and taking Oxygen from the atmosphere as needed along the way. Anyway, clearly I am missing something here, or else all launch stages would be using intakes right? There must be some reason why this is not feasible.
So here's my questions:
1) Why don't launch stage liquid rocket engines use air intakes to supply Oxygen instead of Oxygen tanks so that they weigh less and can carry a larger payload?
2) Can rockets like the one pictured above even work?
3) Would air intakes on the side of the rocket be useful so that payloads can be placed on top?

Hoophy said:
1) Why don't launch stage liquid rocket engines use air intakes to supply Oxygen instead of Oxygen tanks so that they weigh less and can carry a larger payload?

You will get much more detailed answers from others but some of the things to consider is the difference in density between LOX and oxygen in vapor form. notice that on the Falcon rockets they even cool the already very dense fuel more just to gain density and thus available fuel. another factor would be that the rocket usually is in the dense lower atmosphere for a very short time.

Hoophy said:
2) Can rockets like the one pictured above even work?

I can't say I have ever seen such a rocket, It reminds me more of a scramjet but if you could post any info on the rocket in question I would be interested in reading about it.

Hoophy said:
3) Would air intakes on the side of the rocket be useful so that payloads can be placed on top?

I can't picture air intakes being very aerodynamic but once again rocket motors are never intended to take advantage of air, to a rocket air = resistance.
Please keep in mind I'm no rocket scientist and there are folks here who can give you much better answers.
Hoophy

Thank you so much! Your answers certainly satisfy my questions, here is the link to the website I got the picture from: http://www.reactionengines.co.uk/sabre_howworks.html [Broken]
Last edited by a moderator: May 7, 2017
1oldman2

Hoophy said:
Thank you so much! Your answers certainly satisfy my questions, here is the link to the website I got the picture from: http://www.reactionengines.co.uk/sabre_howworks.html [Broken]

Your very welcome, thanks for the link on the Sabre. I book marked that one for further reading, I believe we will see some very interesting hybrid propulsion systems developed in the near future and that one certainly seems to have potential, will be interesting to see how it works out

After doing some reading on the SABRE I should point out that that is a completely different animal from the conventional rocket system I was referring to. A hybrid design such as that wouldn't really apply to most of my response to your initial question. A very interesting system for space as well as atmospheric flight.

I am excited to see what the future has in store for single stage to orbit vessels. Development of heavy lifting SSTOs I think will make space exploration cheaper and perhaps even profitable. :D
SteamKing
Staff Emeritus
Science Advisor
Homework Helper

The first stage of the Saturn V rocket, the S-IC, contained 5 F-1 rocket engines. This stage burned a fuel called RP-1, which is a non-cryogenic hydrocarbon liquid similar to kerosene, and liquid oxygen (LOX) as the oxidizer:

When the F-1 engine is running at full thrust, approximately 1000 liters per second of RP-1 are being burned with about 1500 L/s of LOX.

That's each engine, and there are five running at the same time. If the F-1 engines on the Saturn V first stage were to burn atmospheric oxygen - remember, the atmosphere only contains about 20% oxygen - the rest is nitrogen which is not burned, yet must pass thru the engine, to obtain the equivalent of 1500 L/s of liquid oxygen from the atmosphere would require that staggering volumes of air would have to pass thru the engines, and most of it would simply be inert in terms of actually making thrust. As it is, using liquid oxygen, the F-1 engine measures almost 6 meters in height, and the exhaust nozzle has a diameter of almost 4 meters

The first stage of the Saturn V brings the rocket from a stand still to a velocity of almost 10,000 kph by the time the engines shut down and the first stage separates from the rest of the rocket. It's very difficult to design the plumbing necessary so that an air breathing engine can operate at such a wide range of velocities, not to mention five of them. Typically, the F-1 engines operated for about 165 seconds after ignition.
Hoophy

Wow, thanks for the detailed response, this makes a lot more sense to me. Thanks.
CWatters
Science Advisor
Homework Helper
Gold Member

At take off speeds are quite low. So the volume of air (and hence oxygen) rushing in would be quite low unless the intake is very large in diameter or you have some sort of massive compressor stage to suck in the air.
Share:
Share

Related Threads on Low Atmosphere Rocket Launch Stages Carry Their Own Oxygen -- Why?

Launching a rocket from high altitude

U
First stage of a rocket

S
Rocket Launch as Seen from the Space Station