I found this article while reading about the current earthquake.
Hokkaido and Pacific coast [of Japan] now understood to face higher risk of powerful earthquakes
https://www.japantimes.co.jp/news/2...igher-risk-powerful-earthquakes/#.W5E6OTrn-Uk

Need to track down the study. Not sure if this is the source.
https://phys.org/news/2018-04-future-earthquake-tsunami-southeast-japan.html

Right after a direct hit by one of the biggest typhoons to ever hit Japan and brutal heat this summer. They aren't catching any breaks this year.
StevieTNZ

I saw the news about Japan earlier, and just now checking stuff.co.nz, I see there was an Mag 7.8 earthquake off Fiji - https://www.stuff.co.nz/world/south-pacific/106895640/magnitude-78-quake-hits-off-fiji

I think @davenn mentioned in another thread that the average number of large earthquakes was quite low at some point (if I recall correctly) - is that being made up by now, with all these quakes happening?
OmCheeto
Gold Member

StevieTNZ said:
...
I think @davenn mentioned in another thread that the average number of large earthquakes was quite low at some point (if I recall correctly) -

Indeed! Just pulled up the USGS data for 6.5+ earthquakes over the last 10 years, and between April 3rd and August 4th of this year, there was only one earthquake of that magnitude.
That was 123 days.
With quakes occurring on April 2nd and August 5th, that's about a 62 day period average between the 3 quakes.
The average time between such sized quakes was about 7.4 days.


is that being made up by now, with all these quakes happening?

Analyzing earthquake data makes me crazy, so I won't comment.

Here's my obligatory graph, just in case you'd like to scratch YOUR head. 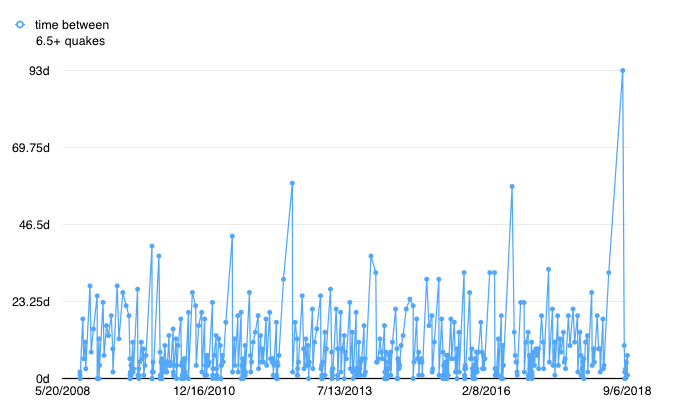