Pyridine and pyrrolidine react rapidly with dilute aqueous HCl to form the corresponding hydrochloride salts which are easily purified, isolated and stored in a charge. However, pyrrole, which is another nitrogen-containing heterocycle, does not form a hydrochloride salt under these conditions, explain. 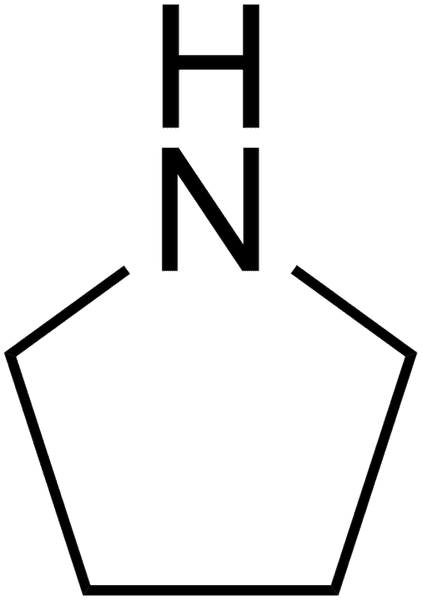 I am pretty sure that resonance plays a major role in the answer. Is it because by protonating the pyrrole with the HCl you create an aromatic compound that prefers to stay in that form?

You're right, resonance does have a role, but its role is a lot simpler than you're thinking.

Draw the hypothetical protonated form of pyrrole. Now ask yourself if it is aromatic. Remember: breaking aromaticity comes at a cost of ~35 kcal/mol, which is a lot of energy and often unfavorable!

so by protonating the pyrrole you would lose its stability because it would eliminate all its possible resonance structures by inducing the + charge on the nitrogen while the others still are able to resonate?
DDTea

rgk13 said:
so by protonating the pyrrole you would lose its stability because it would eliminate all its possible resonance structures by inducing the + charge on the nitrogen while the others still are able to resonate?

Eep, watch your terminology because that will be your pitfall!! By protonating the nitrogen in pyrrole, its lone pair electrons are no longer delocalized across the ring in the pi molecular orbital--they would be confined to a sigma bond between the N and the new H. Note that in pyrrole, every atom is sp2 hybridized. If any of them are changed to sp3 hybridization, as protonating the N would do, then the aromaticity is broken (i.e., 4n + 2 pi electrons in the ring--Huckel rule!).

There is no charge on the nitrogen when it is protonated! It is electrically neutral (count the protons and electrons around it--neutral). It is only a formal charge, which has no relation to actual electrostatic charges.

Also, be careful with the word "resonating." The structures/bonds are not resonating between each other in any classical sense. It is both structures *at the same time.* Weird eh? Basically, the "true" structure, representing the real bond strengths, distances, and charge densities cannot be represented by these simple drawings. So, we draw a series of "contributing structures" to describe its actual chemical behavior. What it comes down to, especially in regard to conjugated pi molecular orbitals, is that the electrons are not confined between any two atoms of a bond, but are distributed across the entire molecular orbital!

Yes, I realize I'm using a hybrid of valence bond theory and MO theory here, but I'm doing so because *it works.* There are some people on this forum who only want to discuss things in terms of MO theory, but that's not my style :)
rgk13

Forming or breaking aromaticity has a *huge* impact in the reactivity of molecules!