As I understand it, satellites orbiting the Darth are constantly falling but keep missing. Why then is their speed constant? Why do they not tangentially accelerate like spaceships do when using a gravity assist?

UMath1 said:
As I understand it, satellites orbiting the Darth are constantly falling but keep missing. Why then is their speed constant? Why do they not tangentially accelerate like spaceships do when using a gravity assist?

A circular orbit is effectively an equilibrium. Perhaps the simplest way to understand this is to look at the energy. Unless the satellite falls closer to Earth, then its gravitational potential energy remains constant, so its kinetic energy cannot increase.

In my opinion, it's one of nature's beautiful balancing acts.
Let'sthink

It can be mathematically proved that if force is always perpendicular to teh velocity its magnitude cannot change. Also a force cannot bring any change in velocity in a direction perpendicular to its own direction. having displacement is another matter. it does not have a component of velocity in the direction of gravitational force. So the satellite is momentarily at rest in the direction of the gravitational force as it happens when you throw a stone up. It comes top momentarily rest at its top most position but its acceleration is all the time the same and nonzero. It is another matter that the orbit can be elliptical too. In that case the satellite will come nearest and go farthest from the center of earth.
A.T.
Science Advisor

UMath1 said:
I understand that the force of gravity is perpendicular to the satellites motion.

Then in which direction should it accelerate tangentially? With the motion or against the motion?
UMath1

Shouldn'tit have a downward acceleration? If you fire a bullet horizontally, it's x-velocity is constant but due to acceleration in the y-direction it acquires velocity in the y-direction and curves in a parabolic path. Similarly, when a satellite is launched it curves. So isn't it accelerating in the y-direction like the bullet? The only difference that for some reason for every gain in y-velocity the satellite lose x-velocity. I don't understand the concept behind how this works.
ZapperZ
Staff Emeritus
Science Advisor
Education Advisor
Insights Author

It DOES have a "downward" acceleration. But the direction of the force also keeps changing and continues to be perpendicular to the new velocity direction.

It has. But you said it should also have tangential acceleration. So in which direction along the tangent should it accelerate, if the force is perpendicular to the tangent?
UMath1

I think this is correct. But I don't understand why this happens. Why does the x-velocity decrease as the y-velocity increases?
PeroK
Science Advisor
Homework Helper
Insights Author
Gold Member
2021 Award

I think this is correct. But I don't understand why this happens. Why does the x-velocity decrease as the y-velocity increases?

You need to study circular motion. Acceleration is rate of change of velocity and velocity is a vector, hence there is speed and direction. A force can cause speed and/or direction to change: sometimes only one, sometimes both. Further to that, you need to do the work to study the topic.
A.T.
Science Advisor

Then how do you explain the negative acceleration in the x-direction which is not present in the projectile motion?
jbriggs444
Science Advisor
Homework Helper

UMath1 said:
Then how do you explain the negative acceleration in the x-direction which is not present in the projectile motion?

Edit: I seem to have completely missed the point of the quoted passage. My apologies.
Last edited: Apr 29, 2016
A.T.
Science Advisor

UMath1 said:
Then how do you explain the negative acceleration in the x-direction which is not present in the projectile motion?

It is present, but neglected at small ranges, where the gravitational field is assumed to be uniform.
Let'sthink

If it helps, objects in elliptical orbits do get faster and slower when they move closer and further from Earth. And any object in projectile motion is actually in an elliptical orbit...just not a very good one.
Janus
Staff Emeritus
Science Advisor
Insights Author
Gold Member

In your first example you are assuming that gravity always pulls in the y direction as in the top left diagram in the image below. However, this is only an approximation that works if we are dealing with rather small projectile velocities such that the distance traveled in the x direction is small compared to the size of the Earth.
The more accurate description of what happens, and the one you need to consider with satellites is the upper right diagram. Here, when the projectile starts, the pull of gravity is in purely the y direction. However, as it moves in the x direction, gravity which always acts towards the center of the planet, starts to gain an m x direction component which acts on the x velocity of the projectile. 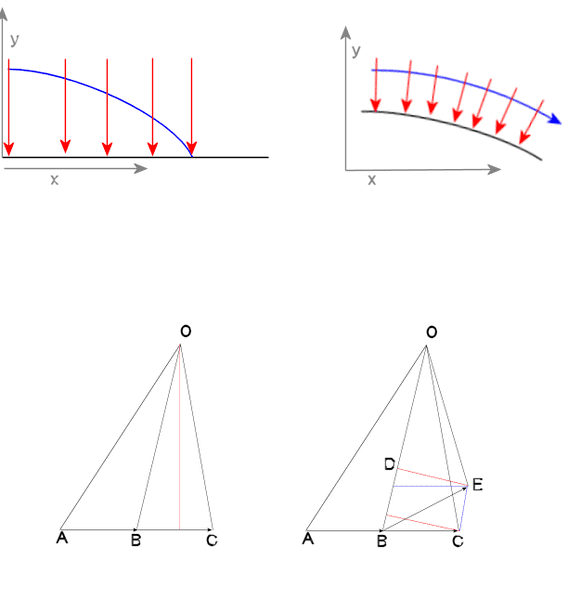 The bottom 2 diagrams demonstrates Newton's theorem of areas, which proves that an object responding to a centrally acting force will sweep out equal areas in equal times.
First consider an object traveling at a uniform velocity such that it travels from A to B in one second. in relation to point O it sweeps out the triangular area OAB in one second. 1 sec later it arrives at point C, having swept out triangle OBC. Since the two bases AB and BC and the altitude (the red line) of these triangles are equal, the areas of triangles OAB and OBC are equal.

Now assume that upon reaching B, the object is acted on by an instantaneous force acting along the BO line. The force is such that if, the object was at rest with respect to O, it would be given a velocity such that it would arrive at point D after 1 sec. It is not at rest however and has a BC velocity and the end result is a velocity that has the object arrive at E after 1 sec. Thus in one sec it sweeps out triangle OBE. Note that triangles OBC and OBE share 1 side OB and since the lines BD and CE are parallel, the two red lines are of equal length. If we take OB as the base of both triangles, the red lines are their altitudes, and triangles OBC and OBE are equal. Since we already showed that OAB and OBC are of equal areas, triangles OAB and OBE must also be of equal areas. Thus the object sweeps out an equal area both before and after being acting on the force towards O. If the object were acted on by a force in the direction of O at point E, the same argument as above shows that the triangle that it sweeps out in the next second will be equal in area to OBE and by extension, OAB.

By shortening the time periods between the applications of the force in the O direction we reach the limit of a constantly acting force pointing towards O. (just like gravity constantly acts towards the center of the Earth.) and show that the area swept out by a moving object subjected to such a centrally acting force would be an equal amount in equal times. An object traveling in a circle at a constant tangential speed also sweeps out an equal area in equal times, So it is no wonder that a satellite traveling at the right tangential speed would maintain a circular orbit.
Elliptical orbits are also possible, and they also sweep out equal areas in equal times, and they do so by varying tangential speed with varying distance.(technically, all closed orbits are elliptical, as circles are just a special case of an ellipse.) The limits for an elliptical orbit are that its lowest point cannot be lower than the surface of the object it is orbiting, and its speed cannot be so high that it escapes the planet completely.
UMath1

Uniform Circular Motion vs Circular Orbit due to Gravity