Could you check if you forgot some words in your question? Your question title suggests that maybe you meant to ask whether quantum field theory has anything to say regarding the hydrogen atom on top of what quantum mechanics has to say?

If so, the answer is Yes! The first such QFT effect on the hydrogen atom is called the Lamb shift.
haushofer
Science Advisor
Insights Author

The first calculation you should do in this context (but the question is a bit blurry, as Urs stated) is to calculate the Compton wavelength of the electron in Hydrogen and compare this to the size of the hydrogen atom. This should give you a good understanding why "ordinary" QM is so succesfull in explaining the spectrum of hydrogen.
dextercioby
Science Advisor
Homework Helper
Insights Author

This is well within Standard Model, nothing beyond. A moderator could move it to the quantum one, if the OP sticks to the title.
DrClaude
Mentor

dextercioby said:
This is well within Standard Model, nothing beyond. A moderator could move it to the quantum one, if the OP sticks to the title.

I have a general idea about QFT, but not much more. I see QFT as dealing with fields. I was surprised that a QFT effect is the Lamb shift. Could someone give a general basic description how this works.

PS I thought QM had one up on QFT. Evidently I was wrong.

arupel said:
Could someone give a general basic description how this works.

The Lamb shift is a tiny shift in the energy spectrum of excitations of the electron orbits in the hydrogen atom. 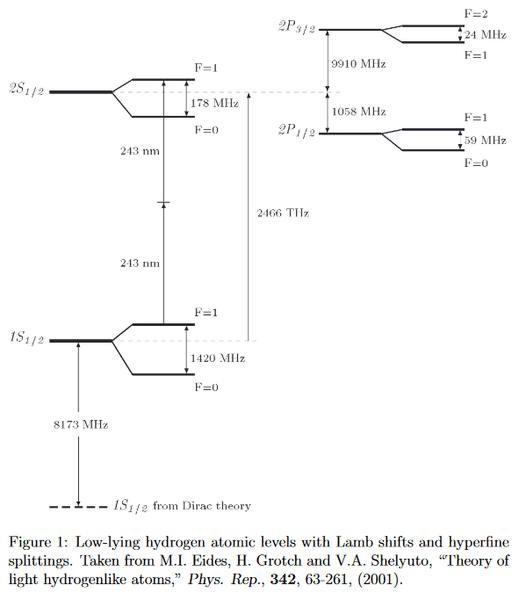 This is a “fine structure” effect not seen by the quantum mechanics of the electron, but resulting from radiative corrections involving photon emission/absorption only seen by regarding the electron in perturbative quantum field theory, here in quantum electrodynamics.

The Lamb shift may be attributed to 1-loop Feynman diagrams contributions giving “radiative corrections” to the basic tree level vertex that describes the basic interaction of the electron with the background electromagnetic field, hence called vertex corrections. 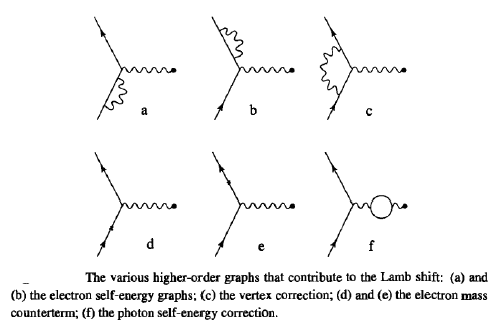 (Here the dot on the right is the external vertex for the background electromagnetic field.)

The main contribution (often referred to as the vertex correction) is due to the radiative correction induced by the electron emitting a virtual photon, then interacting with the background electromagnetic field, and and re-absorbing the virtual photon; described by this Feynman diagram:

Historically, the observation of the Lamb shift in experiment catalyzed the theoretic development of quantum electrodynamics specifically and of perturbative quantum field theory generally.

Related Threads on Quantum field theory and the hydrogen atom

Question about Quantum Theory regarding hydrogen atom and photon

Hydrogen atom in a b field