Solving the 1D Poisson equation for a MOS device

The current solution is for φ (top) and ρ (bottom): 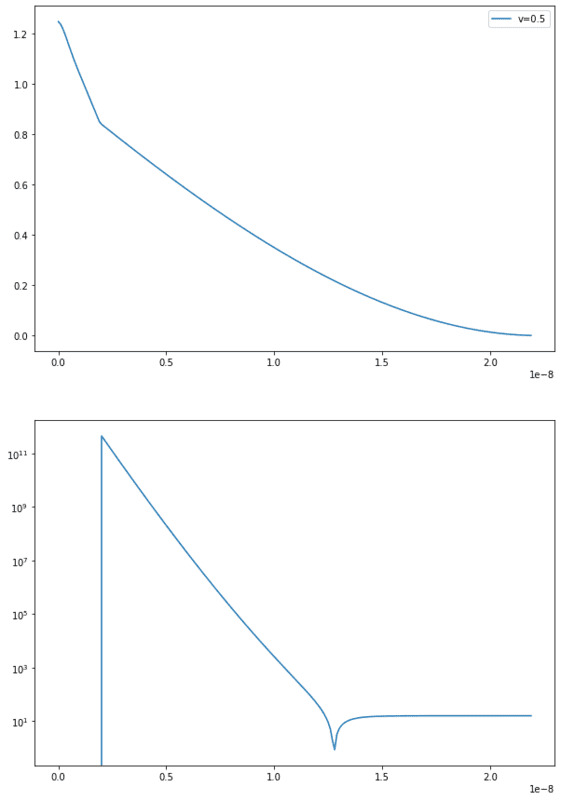 After the oxide-silicon interface at x_ox = 2nm, φ decreases very slowly and doesn't reflect the depletion region. I think that there is a problem with the boundary conditions which are for the moment (with V = 0.5 applied gate voltage in the image):

I used eps_Si and eps_SiO2 in the box integration for the area of the semiconductor and the oxide. (T = 300 K)

I also tried some variations adding φ_bi (built-in potential) to the boundaries. Could someone please help me and tell me where my mistake is? Is there an interface condition at the SiO2 - Si interface I need to apply?

Thank you very much!

Why is rho decreasing linearly in the silicon after the Si interface? I suggest you plot out the fixed latice charge(Nd-Na), n, and p all separately so you can see what's going on.
luidgi93

Thanks for your answer.
I did all that before and it didn’t help me. I can either modify the boundary conditions or the used equations. I checked the calculation of n and p before and they seem reasonable. The values are correct. Na and Nd are fix with Na>Nd. So I really think the problem is in either the equation in the linear system or the boundaries. Could you please answer my question on the boundary conditions?
jsgruszynski

So the way you normally derive a MOSFET from "first principles" is embodied in the SPICE level 3 model. Sadly that was one of the last models that was so derived. Since then most modeling is done with curve-fits of "inferior level-3-like models" as a multivariate regression over W and L. This is basically what the Berkeley BSIM family of models do.

The problem behind all of this being that you can not measure doping profiles with any certainty in any process smaller than 10 microns so you can not know the rho value of a Poisson equation. You have to assume with a hand-wave. Otherwise you have somehow assume a profile which can never be proven.

So Level 3 is derived this way:
The reason for needing this voltage is that all of the phenomena of depletion, accumulation and inversion are dependent upon that surface voltage.

This equation then needs to be integration along the channel length though there's an extra piece of information: the charge distribution in that axis. This is an unknown because there's a circular relation between the ensemble of states of the channel, the surface potential and the formation of the state at distance into the channel from the source - one too many unknowns vs. equations so Level 3 punts and allocates charge in thirds.

There are newer models from MIT that may have solved this though it's merely done with yet another empirical variable to indirectly allocate the charge. I'd recommend looking that MIT model as well as historic documentation about the derivation of Level 3.

The key thing: the phenomenology of the gate is different from the channel and that voltage at the surface is key. Not taking that into account is problematic.
Log in or register to reply now!

Anybody solve this mosfet transconductance problem

The power spectrum of Poisson noise

Problem with the Finite Element Method applied to Electrostatics

Looking for the right MOSFET transistor

Suppress of the Poisson noise