Some black holes may actually be Quark Stars

Some black holes may actually be "Quark Stars" 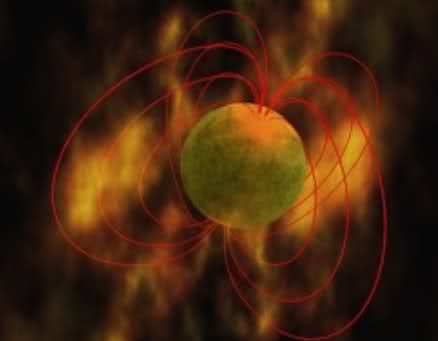 "Stellar" black holes, ones only a few times heavier than the sun, may actually be something even weirder called a quark star, or "strange" star.

A physics team led by Zoltan Kovacs of the University of Hong Kong sizes up the issue in the current Monthly Notices of the Royal Astronomical Society. Quark stars are only theoretical right now, but "the observational identification of quarks stars would represent a major scientific achievement," Kovacs says.

First suggested in 1970, a strange star is a collapsed star that doesn't quite crumple enough to turn into a full-fledged black hole and yet is too heavy to become a so-called neutron star (at least 1.4 times heavier than the sun.)\

In a quark star, gravity would be so strong that it squeezes the subatomic particles called quarks right out of the protons and neutron building blocks of the original star's atoms. That would leave behind a solid mass of quark stuff called strange matter, hence the name "strange star."

Earlier in the decade, astronomers suggested that a neutron star called RX J1856, about 400 light-years away (one light-year is about 5.9 trillion miles) was about one-third too small and might be a quark star. But a 2004 Nuclear Physics B journal report showed the star's intense magnetic field explained its size, so it really was a neutron star.

So how is a "quark star" detected ?

So, if size alone won't reveal a quark star, what will? In the new study, Kovacs and his colleagues, Cheng Kwong-sang and Tiberiu Harko, analyze the disks of dust and gas circling supposed black holes. Whipped to high speeds by the intense gravity of a black hole, these disks are thought to heat to high temperatures and emit powerful radiation. For a quark star, the radiation would be about 10% less than predicted around a black hole, they find. And a quark star would give off a dim light (called bremsstrahlung emission), unlike a black hole, emitted by a thin layer of electrons on its surface.

http://en.wikipedia.org/wiki/Bremsstrahlung" [Broken] means braking radiation, produced by the acceleration of a charged particle when deflected by another charged particle. It was discovered over 100 years ago by Nikola Tesla.

So far, no "quark stars" have been confirmed, but:

The find would confirm a "strange-matter hypothesis," suggesting that normal matter will decay into strange matter if it comes into contact with some of the stuff. "It would be a great surprise to most physicists, and most people I think, to discover that matter as we know it is not stable, and it all really 'wants' to turn in to strange matter," Alford adds. So, in theory, like "Ice-9" in Kurt Vonnegut's novel Cat's Cradle, strange matter could eat up the universe.

But Manjari Bagchi of India's Inter University Centre for Astronomy and Astrophysics in Pune says studying pulsar pairs will reveal whether quark stars exist sooner, based purely on their orbits, not on the brightness or dimness of the stars. Or finding a neutron star that weighs less than the sun would mean that it has to be a quark star, he says, because neutron stars wouldn't have enough gravity to hold their neutrons together at that size.

But Manjari Bagchi of India's Inter University Centre for Astronomy and Astrophysics in Pune says studying pulsar pairs will reveal whether quark stars exist sooner, based purely on their orbits, not on the brightness or dimness of the stars. Or finding a neutron star that weighs less than the sun would mean that it has to be a quark star, he says, because neutron stars wouldn't have enough gravity to hold their neutrons together at that size.

To summarize: Dark Stars should:


Emit (dim light) Bremsstrahlung radiation​
Have mass more than 1.4 times our sun​
Have 10% less mass than predicted around a (minimal?) black hole​
If dark stars are in fact, dark matter, they should weigh about 6 times that of normal matter​
PFer's are a pretty tough crowd, is there anything the article missed ?

Quark stars could fill the gap between the mass of neutron stars and stellar black holes - it is a pretty big gap. They would be very dim and difficult to detect.
Naty1

I'd have more to say,maybe, but Chronos quote always distracts me (heh,heh)


In the beginning the Universe was created. This has made a lot of people very angry and has been widely regarded as a bad move.

Ok, I have regained what little composure I possess:


In a quark star, gravity would be so strong that it squeezes the subatomic particles called quarks right out of the protons and neutron building blocks of the original star's atoms

I don't know enough about quarks to comment...do they have a degeneracy pressure, like say electrons...
they are spin 1/2 particles so Pauli exclusion applies, right??? Electron degeneracy pressure is computed here,
http://en.wikipedia.org/wiki/Electron_degeneracy_pressure

so I guess somebody knows what it is for quarks and whether that fits the described "strange star" at all....??
rhody
Gold Member

Thanks for the responses:

rhody said:
Thanks for the responses:

We unfortunately have no way of knowing this. Our current theory does, in fact, allow such states to exist. Whether they represent reality, though, is another question.

Our current theory which rules in the high density matter inside a neutron star is quantum chromodynamics (QCD). As one ventures deeper into a neutron star, the pressure will change, as will the density and temperature. The way pressure behaves as density and temperature changes is called the equation of state. Different types of matter have different equations of state, and there have been a large number of proposed equations of state to predict how matter behaves at the extreme conditions of a neutron star.

Because a neutron star is held up by the nucleon-nucleon interaction pressure, this equation of state really affects the size of the neutron star. The mass, and the pressure behavior, also depend on the mass of the star.

Currently, our observations of the masses and radii of neutron stars have significant errors associated with the measurements. In fact, every proposed realistic equation of state cannot be ruled out with our observations, whether it be the equation of state that predicts quark stars, strange stars, less exotic neutron stars, or something different.
stevebd1
Insights Author
Gold Member

rhody said:
Thanks for the responses:

http://arxiv.org/abs/0705.2708v2
Neutron Star Interiors and the Equation of State of Superdense Matter

stevebd1 said:
It's a bit old but this is an interesting article regarding phase transitions in neutron stars-

http://arxiv.org/abs/0705.2708v2
Neutron Star Interiors and the Equation of State of Superdense Matter

Those links led me to this:http://www.lbl.gov/Science-Articles/Research-Review/Highlights/1998/PHYS_neutron.html#"

which suggests that from the article:


"First at the center and then in an expanding region, the relatively incompressible nuclear matter will be converted to the highly compressible quark matter phase," says Glendenning. "This conversion to quark matter (which has been likened to the consistency of soup) allows the pulsar to rapidly shrink."

The pulsar's sudden reduction in size results in a "spin-up," much like rotating ice skaters spin faster when they tuck their arms in close to their bodies. For example, a pulsar spinning at 200 rotations per second might, for a time, spin at 202 rotations per second.

meaning if a spinning pulsar can be detected that for a short period increases its rotational frequency, that this may be a signature that in fact, quark-gluon plasma has been created in the interior of the neutron star.

Do you happen to know if Dr Norman Glendenning is still alive or not ? I tried searching for an obituary for him and could find none (for free that is).

Its funny, but whenever you are looking into something deeply, it always pays to conduct an extensive search for those who blazed a trail before you did. History repeats this over and over.

From the little I have read so far about Dr Glendenning, it appears he was ahead of his peers, only time and new discoveries will confirm that for sure, though.

This is a good paper, thanks. Glendenning is sited 4 times in the references (192 of them!), it appears that there are about 7 models (see page 4), and that the core appears to be made up of up, down, and strange quarks, and exist in what is known as color superconducting state (see page 12, 3.5). On page 24, the author(s) pose a series of 25 conclusions/questions. It is obvious to me that a great deal of work needs to be done in order to come to grips with the conclusions/questions presented below:


Can anyone here demonstrate how to graph the interior charge function of a charged neutron star?

I specifically do not know what the solution is for the electric current [tex]I[/tex] for the relativistic current density [tex]j^0[/tex].

Suggested for: Some black holes may actually be Quark Stars

Black holes may be absorbed?

B If Quark stars exist why do Neutron stars become Black holes?

I Are black holes actually holes?
2

B Neutron stars and black holes
3

B Are Black Holes just stars?

I Are quark stars a realistic solution to the black hole singularity problem?