Have there been any measurements of the strong force? Also its curve of the strength of the force vs distance

It is possible to create such curve, but it will not be very useful, because the strong force also depends on particles orientation (spin), therefore you need to draw family of curves rather than single curve.
Also, you should distinguish between strong force itself (which binds quarks in hadrons), and the higher-order residuals of strong force (comparable to gravitational tidal forces - this part binding nucleons in atomic nuclei).
The force(distance) curve for strong force higher order residuals is below: 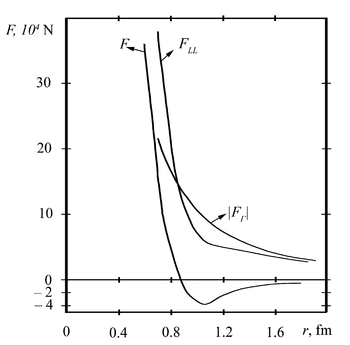 Actually, we have problems simulating strong force because calculations tends to easily diverge at larger distances. The quazi-classical solutions (based on matter wave made of pi-mesons) seems to suggest long-range tail of strong force can be as long as 20000 fm before exponentially decaying. In real world, hadrons strong force is very effectively shielded by their "shell" of virtual mesons, confining strong force to just 1-2 fm range. Details on how shielding works is still a subject of scientific debate, but within shield the strong force falls with distance slower than r-2

Thank you so much.
Copernicuson

Is there an equivalent charge value to elementary charge?
You must log in or register to reply here.

I Strong force and superposition