So as a learning project I am trying to solve a transformer with losses but I am stuck.
1 coil L1 with N1 turns is excited by a sinusoidal voltage V1 with a resistor R1 in series. Wound around a common core with a second coil L2 with N2 turns and a resistor R2 also in series.

I think I am missing a step... because I think I1, I2 are dependent on each other somehow. What am I missing. Since this is not an ideal transformer, I don't think N1I1=N2I2.. so can someone tell me how I can relate them or what I did wrong please? 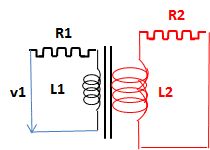 So, the first equation has to be-in my opinion:
v1=R1*i1+L1leakage*di1/dt+L1core*di1/dt-M*di2/dt
In your case M12=M21=M~=SQRT(L1core*L2core)
L2core*di2/dt-M*di1/dt+R2*i2+L2leakage*di2/dt=0
L1leakage exists since part of the flux generated by i1 flows in air not in the core. The same at secondary coil.
The magnetic flux in the core is considered constant. So if the secondary circuit is open- that
means i2=0- then the flux in the core will be Io*Np/Rc [Rc=reluctance].When reclosing the secondary circuit the core flux stays the same Np*i1/Rc+Ns*i2/Rc=Np*Io/Rc
There are a few ways to present the transformer magnetic circuits and the inductances in a transformer.
In electric power engineering the Steinmetz Equivalent Circuit is employed.

Never the less you need here to know Rp,R’s,Xp,X’s and Xm and Rfe [the linkage reactance and the equivalent resistance of the core losses] and Vp-of course.
Log in or register to reply now!

Related Threads on Trying to model mutual inductance with losses

Mutual inductances - are they always equal?

Trying to emulate Inductance with gyrator