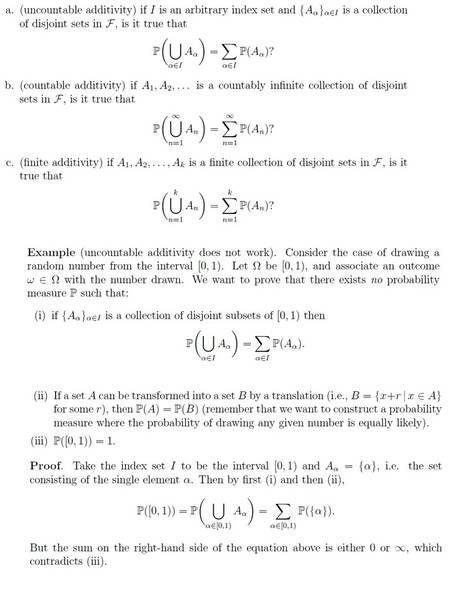 Respected members: I am trying to learn this example but I am stuck that "WHY the sum on the right-hand side of the equation above is either 0 or ∞, which
contradicts (iii)."
Can anyone give me an example that when will it 0 and when it will ∞ ?

Please correct me if my approach is wrong.

Why the probability of {0} is equal to 0 i.e. P({0}) = P_0 = 0 ? because in (ii) it says "(remember that we want to construct a probability measure where the probability of drawing any given number is equally likely)." does it not say that like other numbers in [0, 1) the 0 has equal probability to appear? or are we considering the number of points in [0, 1) as cantor set (Cantor ternary set) which means that we don't know that how many of them are in [0, 1) ?

PS. I am totally confused because when I look at an example of a fair single coin toss then the probability measure gives 1/2 for head and 1/2 for tail. Similarly, if the probability of drawing any given number is equally likely then why P_0 is zero?
CompuChip
Science Advisor
Homework Helper

It's not necessarily. I said: if it is 0, then the infinite sum is 0. If it is not 0, then the sum is infinite.
woundedtiger4

I Question about simplifying Sigma notation

I Cantor's decimal proof that (0,1) is uncountable