I have some trouble regarding the relationship between voltage and reactive power. From what I've read you control the amount of reactive power the generator is producing or absorbing by increasing or lowering the excitation of the generator.

I have some trouble getting my head around this, so I was wondering if someone could show me the equation that shows me when I increase the excitation I increase the amount of reactive power into the grid and vice versa.

I need to see the equation to see how this relates, thats how my brain is put togheter, or if someone could attempt to explain this to me I would be glad.


Thank you for any help, best regards.

There are two approaches to answering your question. Grid centric or generator centric. 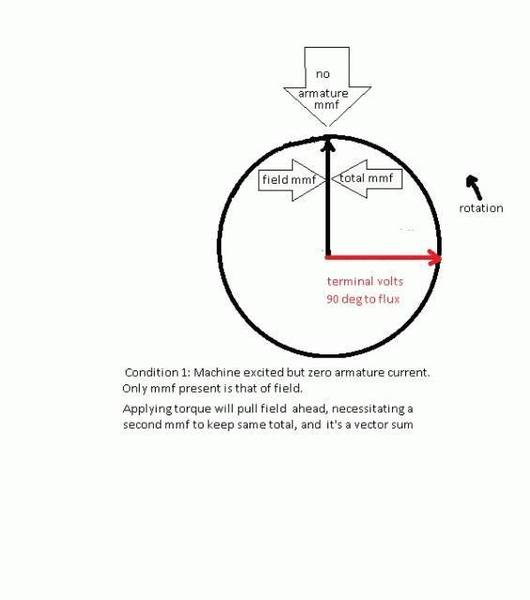 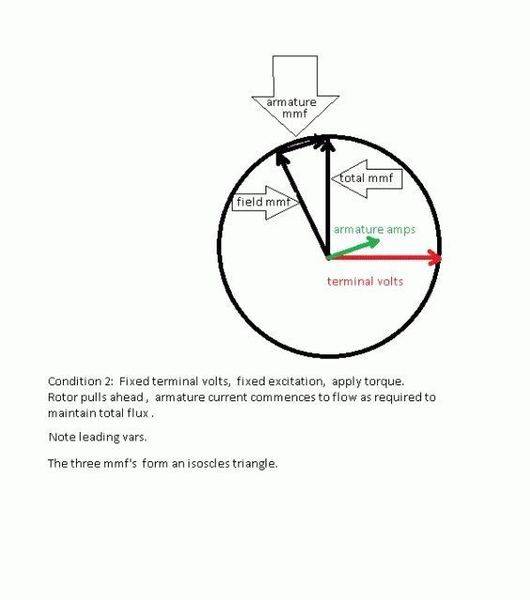 next i'll raise excitation just enough to bring power factor back to 1.0 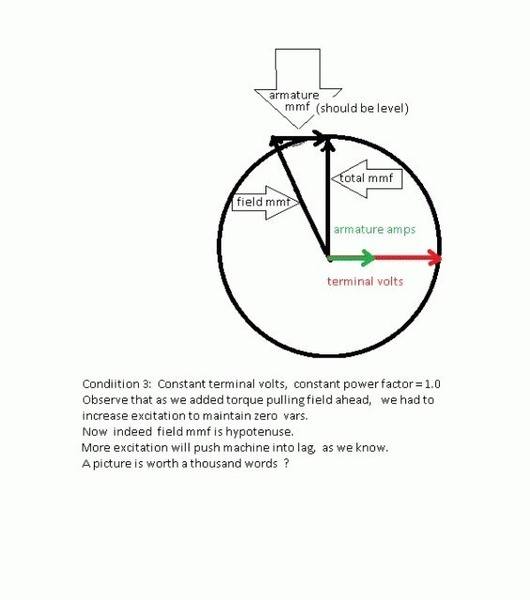 I am equation challenged so think in pictures,
sorry if above seems over-simplistic but it's how i figure out the formulas.

Think of the generator as an ideal voltage source with voltage in proportion to field current,
and an inductance in series equal to Zsynchronous which is a physical characteristic of the machine..

i hope above helps you accept the math.
OliskaP

Both of you, thanks, and jim for taking the time creating the drawings.
OliskaP

By the way jim hardy, will the total MMF be constant? From what I see from the pictures, you adjust the field MMF by adjusting the field current, so will the armature MMF "adjust automatically" to maintain constant total MMF?
jim hardy
Science Advisor
Gold Member
Dearly Missed

Remember i postulated connection to infinite bus.
Yes is the answer, with that qualification. Ohm's law dictates it.
Armature current will flow and remember that mmf is current X number of turns.

I further simplified by omitting non-liearity of iron, i used mmf and flux interchangeably.
Voltage is proportional to flux
Omitting the nonlinearity of BH curve simplifies the explanation. I think that's necessary to get that "intuitive feel" for the synchronous machine.
Sans that nonlinearity voltage would be linear with total MMF . You'll see something called "Potier Triangles" that helps adjust calculations for nonlinearity.

The effect is called "Armature Reaction" and "Synchronous Impedance" ..
You'll study both soon in your coursework i'm sure.

If you add impedance between machine terminals and infinite bus , then of course terminal volts will change.
OliskaP

Quote from one the posts you linked in your first post:

jim hardy said:
In that phasor diagram observe that total mmf must be perpendicular to terminal volts, and must have same radius..

two ways to explain what i did
1.
I used MMF and Fux interchangeably , ignoring nonlinearity of iron. That's a simplification.
If you allow that departure from rigorous math
then mmf NI and flux Φ are linearly proportional
because Φ = μμ0NIArea/Length
only non-constant in that formula is current I

Now since voltage is proportional to flux* , it is also proportional to MMF
(* Faraday's law, e = ndΦ/dt and since d(sinωt )= ωcosωt they're proportional by ratio ω)
choice of radii is up to the presentor and i chose to keep the presentation as simple as i could.
Made one radius fit all.

2.
Power engineering uses "Per Unit" notation where everything is calculated as a ratio to some base,
usually machine ratings for an individual machine or 100mva for power system problems.

So i , without explaining it first,
I started with terminal voltage at 1.0 of nominal rating, so set radius = 1.0 , 1 per unit volts
field amps at 1.0 of whatever is required to make 1.0 nominal rated volts at rated rpm and unloaded , 1 per unit field amps
field mmf then is 1.0 of whatever are field amps X number of turns on field, for simplicity i set turns = 1 and used same radius = 1.0 per unit field mmf
(though you'll never find field mmf on a machine's nameplate)

for armature amps i just lifted that phasor, changed its color and pasted ot at the origin because that's what armature amps do, flow as necessary to make total flux match terminal volts..

What's set by physics is that terminal volts and total flux must be perpendicular late edit- and in proportion
if you want to redraw the pictures with different radii for mmf and terminal volts go ahead , I drew mine using plain old windows "Paint"
but i don't see a need for that when you're just trying to get the mental models working in your head.

all that said,
The answer to your question is
they don't have to have the same radii, it just makes it a lot easier to demonstrate what's happening if you draw them that way.

Ok, thank you, I think I finally got to understand my initial question a whole lot more, I really appriciate your help.
Share:
Share

A
Why are reactive power and voltage related?