Let me use the terms “power grid” and “network” interchangeably.

What is the Power Grid Required to Do?

You may object to this list.  How can energy and power be separate requirements?  They are intimately related because power is the time derivative of energy.  Bean counters are interested in kWh energy for billing purposes. But when the customer turns on a 100 watt light bulb, he demands that the grid deliver additional energy to him at the rate of 100 watts; no more, no less, not earlier, not later, but 100 watts right now.  The grid designer must satisfy both the bean counter and the customer.

Students of electricity are first taught how to analyze a circuit.  The presumption is that a simple circuit is the most elementary case.  We shall see, that’s not true.

Engineers who deal with networks are concerned with the capacity of the network to transport power from point A to point B, regardless of the source of the power or its ultimate destination.  In addition, the nature and the quantity of the sources and the loads change all the time. Engineers are also concerned with the behavior of the network, independent of the loads or the generators.  Network analysis does not need a complete circuit.  In that respect, network analysis is simpler than circuit analysis. I’ll elaborate.

At this basic level, consider power transmission and power distribution to be the same thing.  The electrical parameters of a power line are distributed, with series  R per mile, series L per mile, and capacitance C to ground per mile as shown below.  The diagram is simplified in that only one of the three phases is shown. 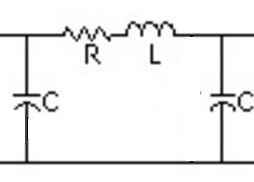 For our purposes,  R is so small that we can neglect it.   R can be used to calculate real power losses in the transmission.  In real life, losses are only about 2% so we can ignore R while studying basics.

Capacitance to ground is a major consideration in ultra-high-voltage lines that run for long distances, and for underground or underwater cables, but for lower voltages and shorter distances, we can neglect C also.

Finally, we don’t explicitly show the ground connection in the graphic.   What we are left with is just X ; it can’t get much simpler than that.

If I say that this is the most complicated circuit you will ever need to understand the basics of the power grid, you will perhaps understand when I say that network analysis is simpler than elementary circuit analysis.

Given the complex voltages  ##\bar V_A## and ##\bar V_B##, we can use Ohm’s law to compute the complex current ##\bar I_{AB}##, and the complex power at each end ##P_A+jQ_A## and ##P_B+jQ_B##.   The results are complicated expressions that I won’t show, but the following real approximate expressions suffice.

That leads to the mantra that power engineers learn to chant over and over like “Hare Krishna”.

Now we can generalize.  A power grid is a network made up of nodes like A and B, branches that connect the nodes, sources (generators), and sinks (loads).   We analyzed just one branch above, but we can repeat that for any branch in an arbitrarily large network.  So, no matter how large the network, you only need to know how to analyze one branch at a time.   Utility planners use software to routinely analyze networks with 250,000 or more nodes

If VAR flow depends on voltage magnitude differences, then VARs must be intimately involved with fulfilling grid requirement #4, keeping all node voltages within the range of 90%-110%.  We call that voltage control.

Suppose we connected a load at node B, that has an inductance the same value as the transmission line’s X.  What would happen?  (The load probably has R too but we don’t need to consider that.) It doesn’t take much math to see that we have two equal Xs in series connected to the ground, the voltage at B is 50% of ##V_A##.  That would cause a lot of VARs to flow from A to B.  It would also violate the 90% – 110% rule.  So, what are some possible remedies to fix low voltage?

Capacitive loads are rare but not unheard of.  The capacitance of power transmission lines themselves becomes dominant for very high voltage long-distance overhead lines, or for underground or underwater cables.  Capacitances to the ground cause high voltages.  To remedy high voltage, all the above apply, but in the other direction.

Now, raise your horizon.  Think not just of nodes A and B, but of entire regions. The above remedies can be applied equally to entire regions with many external connections and thousands of nodes.  If for example, if the entire London Metropolitan Area in England trended toward low voltages, then the grid operator would take action to send more VARs into that region from every direction.

Voltage control costs utilities hundreds of millions of dollars.   But keeping voltage 90% – 110% is a utility’s obligation and not something they can explicitly charge customers for.  Instead, utilities often attempt to discourage excessive VAR demand by charging punitive fees for power factors that are too low. Power factor can be measured locally by the customer.  Charging for power factor rather than Q avoids discussion of that imaginary stuff that many customers believe does not really exist.

Now, consider this line of logic for a generator at node A.

To achieve a steady-state, the rate of change of speed and the rate of change of angle must both be zero. That means that the electrical speed (i.e. RPM/N, where N=number of pole pairs) of every generator on the grid must be identical. (We, therefore, call it a synchronous grid.)  In a non-steady transient state, we integrate power mismatch once to get frequency, then integrate frequency to get the angle, then feed power as a function of the angle it back with a minus sign.  That is a description of a classical second-order harmonic oscillator.  Indeed, generators on power grids typically perform like lightly damped oscillators.

The good news is that every generation can measure the local frequency. It is directly 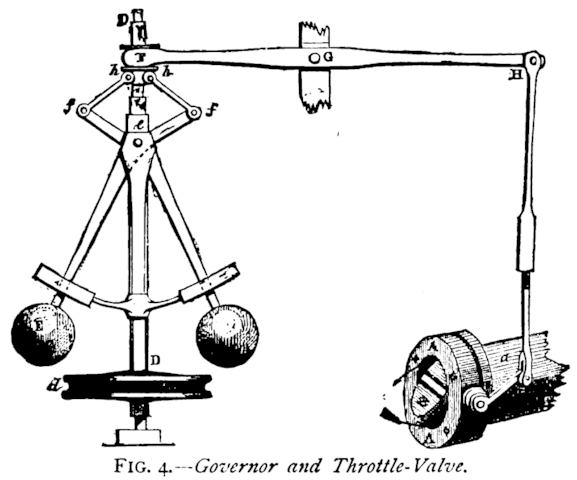 proportional to RPM. That suggests a very simple and completely distributed way to regulate power on the whole grid.  We simply apply James Watt’s 1788 invention, the flyball governor, to each generator.  It varies mechanical power in response to speed changes.   Then we tune the gain of these governors, to be the same in percent, for every generator.  Thereafter, if we add load to the grid, the frequency will start to drop. The speed governors will open the throttles to make more power, with each generator inherently taking up its proportional share of the load until mechanical power (less losses) and electrical power are exactly balanced once again.

I think it’s very cool.  Using centuries-old technology, we can achieve an exquisitely sensitive dynamic balance between total generation produced (minus losses) and total load consumed, all distributed over an arbitrarily large geographic area.  In the same stroke, we have satisfied grid requirements #2 and #3. Hats off to the engineers of yesteryear.

We stopped using flyballs in the 70s.  A modern electronic implementation of a speed governor can be done with a single operational amplifier.  It could hardly be simpler.   This robust distributed scheme kept all the US’ grids operating without a single regional blackout from about 1889 until November 9, 1965 (the date of The Great Northeast Blackout).  Even today despite all our computers, the speed governor is the primary regulator of power grids.  It is inherently distributed. It does not need remote communications of any kind. It is not digital.  It is very difficult to attack via remote means.

PF members sophiecentaur, and Jim Hardy contributed to this article.

The What and Why of Circuit Analysis Assumptions

Learn Why Ohm’s Law Is Not a Law
26 replies