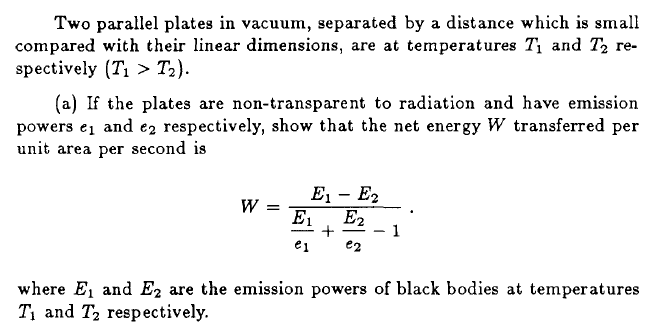 I am really stuck at this question, i would appreciate any tips you have. I already try to goes with series but the calculation is getting harder and tiring, so probably this is not the right way.

Edit: I got a correct answer by assuming a left going and a right going power at each of the two surfaces. I then used the reflectivity as ## R=1-\epsilon ## and multiplied this by the incident power (per unit area), and added this term to ## \epsilon \sigma T^4 ## to get the emerging power from the surface. You do this for both surfaces. You then get expressions for left going and right going power inside the cavity.
additional note: I initially misread their nomenclature. They do have the correct answer.

Edit 2: I have now also worked it by summing two geometric series. That method is also fairly straightforward=if you show a little of your own attempt at this method, I can probably show you any steps that you might be missing.
Hint: Compute the power incident on the ## T_2 ## surface that originates from the first surface using a series. Next compute the power that is incident on the ## T_2 ## surface that originated from the same surface using a series. They are both geometric series, and are readily summed. Once you have that, what is the power absorbed by the second surface?
Last edited: Dec 2, 2020
Share:
Share