Bug walking around the perimeter of a lazy susan (hypothetical)

I ask because I am having trouble understanding how a system like that is truly isolated and angular momentum conserved, but I'm probably overthinking it.

The bug's internal energy here is just confusing me. If I write out a hypothetical where the bug speeds up, do I still consider the chemical potential energy needed to accelerate the bug as internal?
Last edited: Jul 31, 2021

anuttarasammyak said:
I wonder how bug walks on the frictionless bearing.

Bug is on lazy susan, lazy susan is on the bearings.
For added context, this is a lazy susan (a rotating tray, or turntable) 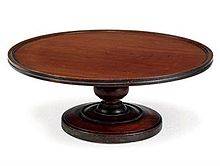 The torque from friction on the bug is the same as the torque from friction on the table, which would have been obvious earlier if I thought about them for more than five seconds and realized they were third law pairs internal to a system. So assuming I am correct in my line of thought, the sum of the change in momentum of the system would be zero.

This seems pretty obvious since internal forces cannot change the momentum of a system, so I think I just need to work on my understanding of internal energy and chemical potential energy (like the gas in a car, or muscular contractions) as they relate to a system.

Just leaving this edit for posterity, in the event someone thinks they spot my misconception(s) here.
Last edited: Jul 31, 2021
Share:
Share

Suggested for: Bug walking around the perimeter of a lazy susan (hypothetical)

B Is Newton's first law of motion applicable when walking?

Friction of a rope around a cylinder

Circular motion of a particle around a track -- what provides the centripital acceleration?
2

Does every object rotate around its center of gravity?
4

Doubts about the mechanics of walking

Rotation around a non fixed axis + linear motion of a system

How do I calculate the speed of the Earth around the Barycentre with the Moon?

The Force Of The Ladder Against The Wall

I Finding the center of area (centroid) of a right triangle