Im trying to complete a worked example and just looking for validation whether what im doing is correct. Im given the following:

I struggled a bit with the j operator and using the polar/rectangular functions but this is what ive gotten so far. Comments would be welcome

Forum rules require the use of the formatting template that is provided in the edit window when you begin a thread in the homework areas of the forums. In future, use the template or your post may be deleted.

I think you're mixing reactance and impedance concepts. Typically reactances are unsigned values in Ohms and designated by a variable "X", so ##X_L## for inductive reactance, and ##X_C## for capacitive reactance. Formulas employing reactances need to be careful of the signs of terms depending upon the circuitry being analyzed.

Impedances on the other hand, generally designated with "Z" variables, are complex numbers that incorporate sign, angle, and magnitude inherently. Formulas written for them treat them as straightforward values and don't require any unusual attention to signs for their terms.

In the formula you've written for ##Z_T##, which should be a simple sum of impedances, you've included "j"'s on the reactive terms and negated the capacitive term. But your variables ##X_L## and ##X_C## which you defined above already incorporate those things in their values. So including them again is not correct.

So. Just write a sum of impedances like any other sum: ##Z_T = R + Z_L + Z_C##. The variables themselves contain their own signs and complex components.

That said, you did write the correct sum when you substituted in the values. Clearly you ignored the signs that you placed in your algebra! Your result for the total impedance looks fine.

For the current that you calculated, recheck the angle for the result. In your ##I = V/Z## calculation the numerator is purely real (angle zero) and the denominator has a negative angle. What sign should you expect the angle of the result to have?
SammyS
Staff Emeritus
Science Advisor
Homework Helper
Gold Member

Ryan Walkowski said:
Im trying to complete a worked example and just looking for validation whether what im doing is correct. I'm given the following:

I struggled a bit with the j operator and using the polar/rectangular functions but this is what ive gotten so far. Comments would be welcome 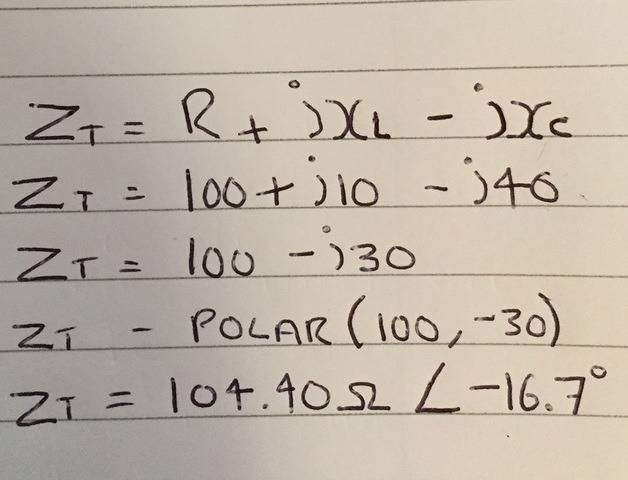 I addition to what gneill said,
:
You should include a complete statement of your problem in the body of your post, no matter what the thread title says, even if the title is very informative.

Also, you don't state whether the circuit is series or parallel or some combination, although from what you have attempted, it appears to be a series circuit.
Share:
Share

S
Engineering Finding the impedance of a circuit

S
Engineering Input and Output Impedance of an Opamp Circuit