I am sharing this to brag about my former boss and mentor Lionel Barthold. He is well into his 90s, but his mind is so sharp that he continues with brilliant inventions. I'm very proud of him.

What would power level DC-DC transformers be good for?
How does it work? You can read the details in this CIGRE paper, or this patent application. Or you can read my 10 cent simplified version below.

I think it is very clever. All of us could solve the simple DC circuit for each half cycle. But the circuit configuration is changed 800 times per second. If we say that each of 500 capacitors can have 4 charge levels, and switching frequency is 400 hertz, then there are ##800*2^{500}*4^{500}## possible combinations per second. But ##4^N## is an overestimate because initial charges are not fully independent, they depend on the time history. Even so, the result is a very large number of switching+initial_condition configurations per second, well above ##10^{100}##. Some of the capacitors are redundant, allowing for failures.

The scheme is shown below. One "column" on the left and with three parallel "columns" on the right. The three columns help smooth the current. (Don't get confused, this is not three phase power, it is three DC devices in parallel.) 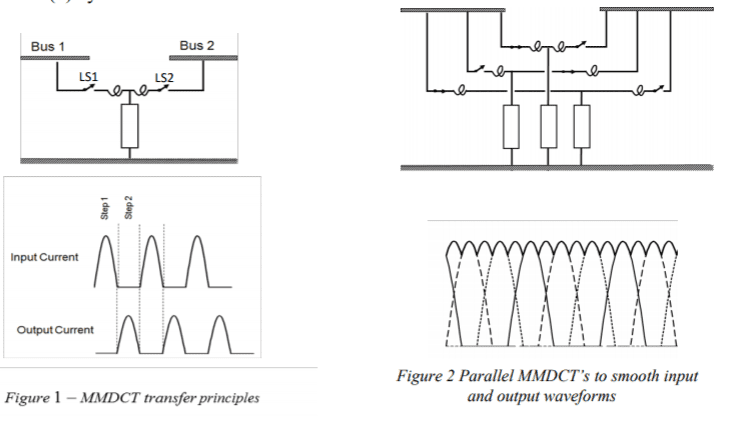 Here's a schematic showing details of the switching electronics.

The simulation shows a transient, +1000 MW transfer, zero MW, then -1000 MW, in only 6 seconds. demonstrating bidirectional power flow with the same bus voltages. The transients show below are at the transformer. The currents have an enormous amount of ripple, but it is high frequency. At the bus ends of the lines, the ripples are largely filtered out by the inductance and capacitance of the 200 km of line, so that the DC looks fairly smooth. 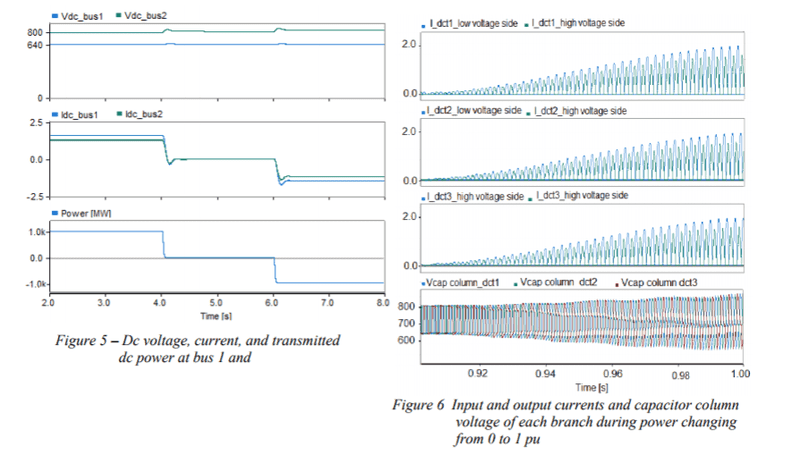 "Bucket and Ladle" charge pump taken where no man has tread before !

Thats really cool. I like it. just a note both of your links appear to go to the same article.

How do you think the power loses would compare vs a typical DC-AC-DC configuration.
Yes you are getting rid of the transformers but you gain the power loss that occurs with each capacitor discharge. Just curious if the simulation holds that data?

donpacino said:
both of your links appear to go to the same article.

Thanks, i repaired the link to the patent application.

To me, calculating power losses in power electronics is very difficult, so I can't answer your question. But the losses comparison for transforming DC voltage the conventional way should not be DC-AC/AC-DC but rather DC-AC/transformer/AC-DC.
Share:
Share