Issue in the electron’s infinite self-energy

Reading Richard Feynman’s book “Quantum Electrodynamics” (Edited by Advanced Book Classics), I read that the electron’s self-energy is infinite and that has been a trouble for QED during 20 years. Feynman proposed a solution based on a cut-off, but that’s not fully satisfactory and I think the question remains still opened.

The Feynman Diagram that describes self-energy is: 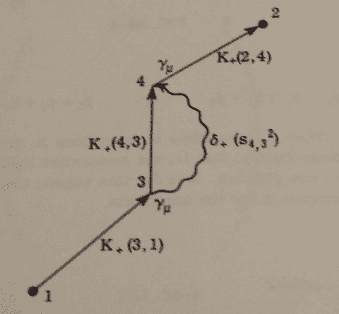 The integral used in the space-time dominion is:

Where
· ΔE is the electron's self-energy
· V and T is the volume and the period of time and them both are infinite.
· The f's are the wave functions.
· K+ is the zeroth order propagator for a spinor using the Dirac equation.
· γμδ+(s24,3)γμ is the potential caused by point '3' over point '4'.

The integration is done over time and space in both points '3' and '4'. We can say that '3' emits a virtual photon and '4' absorbs it.

With this data, although we have to divide by 'V' and 'T' in order to obtain the self-energy, a divergent self-energy is obtained.

However, I think it's not correct to set the potential as γμδ+(s4,32)γμ since this expression is not taking into account the charge density of '3', |f(3)|2.

I think, another way to get the self-energy could be obtained by quantum mechanical means simply by:

Where HSE is the self-energy hamiltonian, that hamiltonian should be:

With this approach, the self-energy is no longer infinite, in fact for a plane-wave (dispersed over the infinite) it's zero.

Can anybody tell me where I am missed? Since for me looks clear that the self-energy should not be infinite.

Thanks a lot!!!
Sergio Prats


NOTE: in self-interactions the initial and the final states must be the same, so this Hamiltonian must not have the same effect in the vawe-function that a normal Hamiltonian.

USeptim said:
The Feynman Diagram that describes self-energy is:

This is not "the" diagram for self-energy; it's only the lowest-order term in the perturbation series. The full series involves an infinite number of diagrams, and if you try to just add them all up, the answer comes out infinite. That's the problem Feynman was describing.


USeptim said:
I think, another way to get the self-energy could be obtained by quantum mechanical means simply by:

Do you have a reference for this? PF does not allow discussion of personal theories.
USeptim

PeterDonis said:
Do you have a reference for this? PF does not allow discussion of personal theories.

USeptim said:
it's a personal interpretation

Which means it's off limits here. Thread closed.
Log in or register to reply now!

Related Threads on Issue in the electron’s infinite self-energy

Self energy of electrons

A Renormalization (Electron self energy)

A A question about the electron self-energy correction

On the Self Energy Correction

What is the self-energy

Self energy logarithmic divergence due to chiral symmetry.