Suppose an observer in the earth frame set out to measure the length AB by measuring the time interval between the event "B coincides with D" (event BD) and the event "A coincides with D" (event AD), and then multiplying the time with ##v##. This observer argues that an observer in the train frame would measure this time to be smaller since moving clocks run slower, and so would arrive at a shorter length for AB. But to the observer in the train frame, length AB is stationary, a proper length, and so should instead be longer. We arrive at a contradiction.

Note: The train observer measures the time interval between event BD and event AD and then multiply it by ##v## to get the length AB. In the train frame, the Earth and hence point D are moving at speed ##v## too. The distance traveled by D during this time is the length AB.

I have arrived, I believe, at a resolution of the fallacy, which, from the tortuous, eventful fate of this thread—its being closed and subsequently eventually re-opened after much pleading and explanation—I deduce, confuses many people indeed, even the experts. Nonetheless, I would like to thank @TSny for providing the much-needed support, clarity and inspiration.

So what's more apt than to start the answer with TSny's words:


The train observer can indeed measure the length of the train by multiplying v by the time interval she measures between events BD and AD.

Also, the earth observer does indeed measure clocks in the train to be ticking slower compared to his own clocks on earth.

The space below is intentionally left blank so that you have a chance to work out the answer on your own first before looking at my answer.
*
*
*
*
*
*
*
*
*
*
If your answer is

, then you have not resolved the fallacy! You need to explain what's wrong with the fallacy, not just give the correct answer using a different method. Why don't slower clocks lead to a shorter length? My answer is below. So one last chance to work out the answer on your own first before looking at it.
*
*
*
*
*
*
*
*
*
*

These 7, 15, 20 s are just wild guesses. I am sure all these figures can be made accurate and expressed in terms of ##v##, etc. But I am really busy at the moment for the next few days. So I shall just stop here and work out the math next time.

Below is an explanation on the non-synchrony of moving clocks: 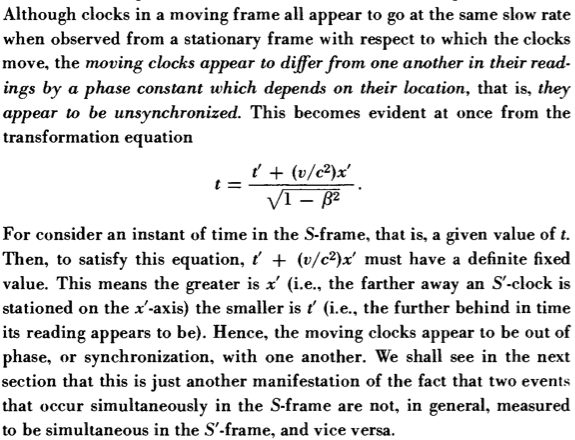 Happiness said:
This observer argues that an observer in the train frame would measure this time to be smaller since moving clocks run slower


Happiness said:
The two moving clocks on the train, the one at A and the one at B, indeed run slower than those on earth. But they are not synchronized!

More precisely, they are not synchronized in the Earth frame. Yes, this would explain, from the Earth observer's point of view, why, even though the train clocks run slow as seen in the Earth frame, the time interval between events BD and AD is still longer in the train frame.
Happiness

Yes that explains it.

Would you then agree that these sentences are in fact correct?


Happiness said:
The train observer measures the time interval between event BD and event AD and then multiply it by ##v## to get the length AB. In the train frame, the Earth and hence point D are moving at speed ##v## too. The distance traveled by D during this time is the length AB.

They seem fine to me.

You just seem to have been making the classic mistake of trying to apply the length contraction and time dilation formulas without being wary of when they apply. Just figure out the coordinates of the events you're interested in and use the Lorentz transforms.
PeterDonis
Mentor
Insights Author
2019 Award

Happiness said:
some doubts and confusion on the following sentences, I believe, remain

If you look, you will see that that entire previous thread on this topic has been deleted, since it's no longer applicable. It was not clear in that previous discussion what you were trying to do. Now that that's clear, this discussion is the only one you need to be concerned with.
PeterDonis
Mentor
Insights Author
2019 Award

PeterDonis said:
The train observer can make the calculation you describe to determine the length AB in his frame.

The Earth observer is reasoning as follows: I have two ends of a moving object that both pass the same fixed point. Since I know how fast the object is moving, I can convert the time between the two ends passing to the length of the object, by multiplying by its known speed ##v##.

These two calculations look similar mathematically--I take a time and multiply it by a speed to get a length--but they are not the same, physically speaking. One is calculating the length of a moving object as it passes a single fixed point. The other is calculating the distance between two fixed points that are passed by a moving object. Of course the results are related by length contraction, but they're still not quite the same kind of calculation physically.
PAllen
Science Advisor
2019 Award

And one involves one clock, the other involves two clocks, making then fundamentally different types of measurement. It is impossible to perform, in the train frame, the type of measurement done in the earth frame.
PAllen
Science Advisor
2019 Award

One more thought on this - there is a certain sense the train observer can use one clock - they just move a clock at a known speed along AB, and compute vt. But, of course, they know, or find that this method is flawed because the clock runs slow compared to their stationary clocks. However, in the limit as v goes to zero, the length measured this way approaches the proper length. So directly using the earth measurement technique in the train frame with vanishing v works and explains the discrepancy with the earth frame (the earth frame is using 'fast clock transport' which produces too small a value. This method has a name - slow clock transport. Normally, it comes about as an alternative clock synch method that is equivalent to Einstein sync in the limit of vanishing v. Here, we use it to measure length instead.
Last edited: Aug 14, 2017
Log in or register to reply now!