How specifically does LQG explain how the universe can oscillate from big bang to big crunch ad infinitum? Wouldn't the total energy able to be used as work decrease after a couple of bounces? Am I simply misunderstanding or making a false assumption about what LQG's premises are? I've not been following physics closely for several years, but I am familiar enough that you probably don't have to use metaphors to explain so feel free to be detailed.

There is just one bounce.
Digitalism

Are you serious? Doesn't that just push back the question of what happened "before" a singularity back one step? Also, how could you know -objectively- how many oscillations have occurred? Or are you saying it would be a time symmetric oscillation or something similar?
marcus
Science Advisor
Gold Member
Dearly Missed

Digitalism said:
Are you serious? Doesn't that just push back the question of what happened "before" a singularity back one step? Also, how could you know -objectively- how many oscillations have occurred? Or are you saying it would be a time symmetric oscillation or something similar?

Nothing wrong with the one-bounce picture. That is the most common in the LQC research lit.
You can set it up, with zero cosmological curvature constant , so that it repeatedly bounces, but that is not the most common case to consider.

It seems to me that the theory does not address questions like "why does existence exist?" or "where did it all come from?". It studies what could have happened to geometry and matter right around the bounce. What implications for inflation? What features might carry over from prior collapsing region? What might be an OBSERVABLE signature of the bounce?

AFAIK it leaves completely open the question of where the prior collapsing phase could have come from!

You might say the attitude is first let's try to understand what really happened instead of that classical failure called "singularity". And let's try to TEST our model by determining its footprint on the CMB polarization map.

So it's very focused on what should replace the classical theory breakdown. When the classical theory is replaced by a quantum theory that recovers the classical shortly before and after its failure, they find that in the new version quantum effects at high density cause gravity to be repellent. The brief episode where gravity is repellent involves a period of faster than exponential growth called "super-inflation", which precedes the ordinary inflation era. Ordinary inflation has constant or slowly declining H, super-inflation has rapidly increasing H, driving H to around the Planck frequency. (H is hubble growth rate, units of reciprocal time). Considerable inhomogeneity, or "structure" is wiped out during the period where quantum effects dominate and gravity is repellent instead of attractive.

there are some recent papers on the pre-inflationary period in LQC. In case you are interested I'll get some links. there's also the interesting question of geometric entropy. How do you define it? When gravity is attractive, structure tends to increase, clumping, inhomogeneity grows, when repellent, the reverse. Different equilibrium states. New paper by Clifton Ellis Tavakol on geometric entropy, still no universally accepted definition.

BTW you are quite right that it pushes the frontier back a step. that is how science works I guess.
Model and test, figure out what was actually going on at the start of expansion, and immediately before. then, if you can do that, you still have another problem:what came before that. But I wouldn't call that *merely* pushing one step back in time. I think it is potentially a valuable accomplishment and very worthwhile striving for. (Though it fails to explain why existence exists ) 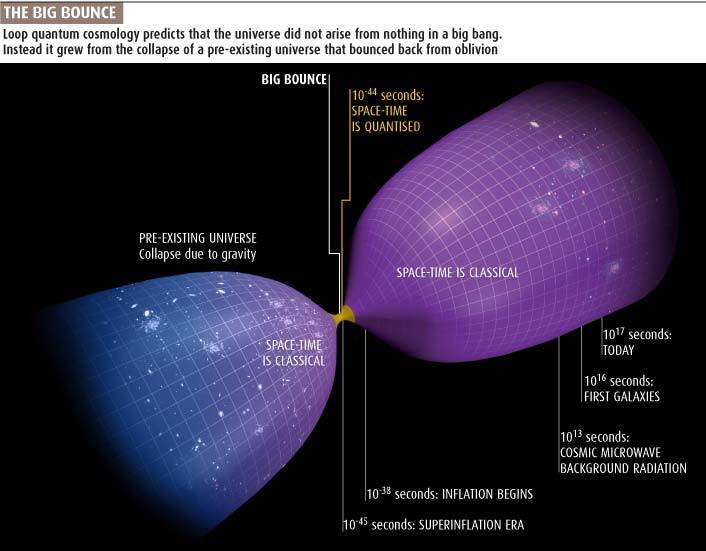 Ok, thank you so much Marcus that helps a lot and I appreciate you addressing the questions in a forthright manner. I guess I am at a loss as to why LQG would be so much more attractive to those working on it/who are proponents of it compared with string theory etc? I know some string models have been dismissed because of recent experiments. I know the "why?"s can not be answered directly, but I thought part of the appeal of LQG was the ability to explain the inner workings/structure of black holes etc and to bypass the information loss problem that happens as masses crunch into singularities. I would most definitely appreciate those links if you have the time to post them!
marcus
Science Advisor
Gold Member
Dearly Missed

I'm not an expert, or active researcher, I simply follow research in QG and cosmology with interest. So this is FWIW, just opinion.
I tend to think that LQG does not explain ANYTHING until it has made some predictions about, say, features of ancient light (CMB) that are then found. And a small preliminary confirmation would even so still be very iffy and provisional.

I can't think how observational astrophysicists would ever confirm what LQG says about *inside* Black Holes. Maybe they might see some signature in Gammaray Bursts (GRB). I'm don't think the theory has a definitive account of the BH *inside*, although there have been several proposals. That would look to a researcher, I imagine, like an attractive area where there are interesting *unsolved* problems.

I get the impression that you want to better understand what attracts researchers to LQG and to Loop cosmology in particular. I imagine that what attracts young researchers, in general, is when a field has interesting *unsolved* problems, which are accessible and which are probably solvable, and which if solved, the solution might turn out to be important or consequential in some way. It's been a growing field, fast developing, for 7 or 8 years now, probably because of these factors.
Right now I think I see a significant rival competing for attention from young researchers: this is called Shape Dynamics. SD burst on the scene in 2011 when the Loops 2011 conference organizers devoted a day to it. The first day of the weeklong conference as I recall. Now in 2013 it will probably make a strong showing at Loops 2013. It is different from LQG but the Loop people have generally had their conferences be open to other background independent approaches (QG where you don't have a fixed geometric setup to start with).
They have hosted CDT (causal dynam. triang.) and AS (asymp. safety) QG in the past. Also have invited string theorists to give talks. I don't know how well SD will thrive in the longer run.

For some papers you could look down the list for the FIRST QUARTER 2013 MIP POLL.
https://www.physicsforums.com/showthread.php?t=681598
It's not all Loop but it has a bunch of interesting recent QG papers.
I'll get some links too, later today.
Last edited: Jun 2, 2013
marcus
Science Advisor
Gold Member
Dearly Missed

Digitalism, this was a really nice question! After thinking for a while about it "LQG and entropy" I decided I would just give you the list of links to the top papers in the first quarter QG poll! That way it comes not just from me alone but from 14 of us who participated. It turned out that the top paper was about geometric ENTROPY and not specifically about LQG. I don't recommend reading it or any of these in particular, could be way too technical. This list is more to get an idea of what topics interest the nonstring qg researchers these days. An overview of the qg "research scene". Any paper you want to look at, just click the link. But the main thing is to kind of scan the lay of the land.

http://arxiv.org/abs/1303.4989
Loop Quantum Gravity and the The Planck Regime of Cosmology
Abhay Ashtekar

Thanks to everybody who participated: Atyy, Chemist@, Chronos, Devils, Jason_0, John, Martin, Nonlinearity, Nullius, Sam, Skydive, Tom and Vasu. It really gives a clarified 3D vision to have all our various viewpoints blended in, instead of just one person's.
Last edited: Jun 2, 2013
MTd2
Gold Member

Is there any relation between LQC's bounce and the end of an Aeon, from Penrose?
Digitalism

ok, thank you so much marcus! I will definitely peruse the links as time permits.
Share:
Share

B Theory of Loop Quantum Gravity

I Is quantum gravity still an immensely popular field?

I Trouble for Loop Quantum Gravity?

I At which point is gravity inconsistent with quantum mechanics?

A Quantum theory without classical time: quantum gravity and unification

I Current progress in quantum gravity?

I Rovelli on Quantum Gravity
4

I Flat arena for quantum gravity?