This would be the very first stage of cities in my fictional world, everything being on foot. This would have a high incidence of fractures and other injuries. Higher than in possibly any other stage.

So first off the strength of my Keplerian humanoid species is impressive. They can carry the weight of a bear for several miles. That is 240 lbs, about the same weight as a very muscular Keplerian. With this weight though, speed lowers to 1 mph. So they would only go about 4 miles in 4 hours. This increases the risk of any injury from an accidental collision and they would likely get multiple fractures in multiple areas, possibly even the skull. Even if the brain was protected in some other way from damage like maybe via elastic fat, that would still mean a serious headache and probably some degree of arthritis in the head which would only worsen the headache.

Runners would be at the second highest risk of injury. They already have an increased risk of fractures just from the fact that they run a lot and might not always see where they are going. A collision would definitely at least cause there to be a lot of bruising if not at least 1 fracture. Top speed for them is 28 mph on average, although a few do push the limits to 35 mph.

Walkers would be at least risk. Sure, they would get fractures if a runner or a load carrier collided with them but another walker colliding and usually at most you've got pretty bad bruising and twisted ankles due to the low speed(maximum of 5 mph walking speed) and relatively low mass and thus a low momentum and inertia.

This would favor laned traffic over more natural foot traffic simply because of the injury risk which brings me to:

The roads would start as simple 2 lane roads and increase up to 12 lanes. It would look a lot like the American Highway system in some ways. 2 lane roads would be the roads that nobody is allowed to run on because this is what a 2 lane road looks like: 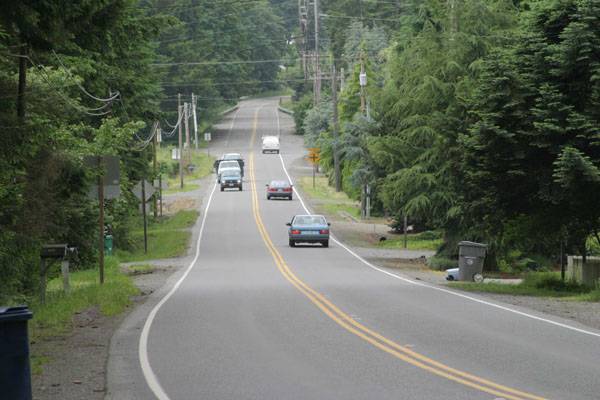 1 lane per direction. So nobody would be allowed to run on these roads.

4 lane roads would be like your typical street or avenue, more than 1 lane per direction. This still leaves walkers and load carriers in the same lane which means you would have one 20 mph lane and one 1 mph lane because of the load carriers' speed of 1 mph.

Roads with more lanes would be highways. 6 lane roads would be intercity highways(highways from 1 city to another). These would finally have 1 lane for each general group with the slowest groups at the edges and the faster runners right in the middle. As the roads get bigger though, groups will have to stop regularly for part of 1 speed group to split into 2 lanes or merge into 1 lane. So the places where highways merge or split off would have humanoid traffic jams with load carriers only being affected for 6 lane to 8 lane and 8 lane to 6 lane transitions and walkers and runners only affected on highways with more than 8 lanes Of course, now that I said that, I realize that isn't true and that every single highway would be affected somehow, even the intercity highways which are the smallest of the highways both in terms of lanes and distance.

But other highways would correspond to higher lane numbers like this:

These highways though would only be important once cities get big enough that the population gets big enough that interstate travel becomes common. And once that becomes common, well foot highways would probably be in the history books or at least extremely rare. If someone wanted to go westward on foot say 777 miles, they would need to stop in at least 14 cities along the way. 14 cities in a row would likely correspond to around 5 states if we wanted to be reasonable here. Of course it could be way more or way fewer, really depends on where exactly you are starting that westward trek. It is pretty unlikely that 1 person would be willing to travel that whole distance on foot so really, the only people traveling from 1 state to another regularly would be those doing construction, those in small states, or those near the border of a state, at least until there is more than 1 option of transport(in other words, not all traffic is on foot anymore).

Any input you have on this stage 1 system I have here?

This set-up reminds me of Toronto and several military facilities. And I strongly doubt your assumptions on injuries. However, there should be statistics available.
stefan r
Science Advisor

Have you considered floating? That would increase the risk of drowning but significantly lower the ankle injury rate.
Share:
Share

Related Threads on Mostly Underground City Stage 1: All on Foot

A realistic mine turned in to an underground city

S
Underground biosphere, what can be the possibilities?

What's Worth Fighting For And The Logical Conclusion Of All Conflict

Writing: Input Wanted SciFi story about making all encryptions obsolete and other dilemmas

How could you remove all the oxygen from Earth's Atmosphere? Hypothetically
2