My model of bicycle spokes breaking

It looks some thing like this. 10000 11930 13391 14637 15771 16812 The This assumes you replace a spoke as soon as it is broken. It is obvious that some of the replacement spokes will break before the last original one goes. I'm not going to build that model because I"m too lazy. Few people will tolerate more than 6 broken spokes before they buy a new wheel.

Go to [email protected] to find out what people will put with. I simply want a guideline to help folks choose a new wheel. The experiment that generated that equation used spoke tensions and cycles that were too high to be used in a practical wheel so I'm going to ignore the predicted life of a new wheel with a reduced stress on each spoke corresponding to more spokes or stronger spokes. Instead I will use fatigue curves for high cycles. My worst spokes survived 1000000 cycles before breaking.

What I need is for some one to keep a precise log of the spokes they broke I can then use curve fitting methods to adjust the equation. The equation has 3 constants that can be adjusted. I'm doing this on the cycling forums so far no one has understood the equation. I need some one to tell me if the equation is not valid. I have broken 60 spokes at 5 quality levels. In order to do that I had to build wheels with used spokes and substandard spokes and ride more than 100000 miles. The equation seems to fit my experience.
Last edited by a moderator: May 11, 2021

I don't think I've ever broken a bicycle spoke. What kind of crazy things are you doing on your bicycle anyway? 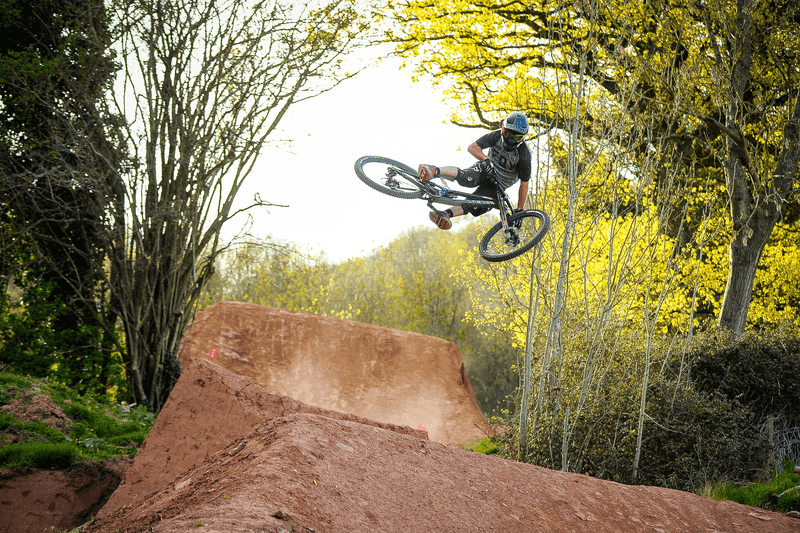 It sounds like your approach involves assuming a standard deviation in a normal distribution for the distribution of failure lives. Standard deviations are quite small for carefully prepared tensile fatigue specimens, but are much larger for more complex parts. Spokes have stress concentrations at the beginning of the threads, and at the bend. Spokes have residual stresses from the manufacturing process. The fatigue life is also affected by the pretension. And obviously by how the bike is ridden. 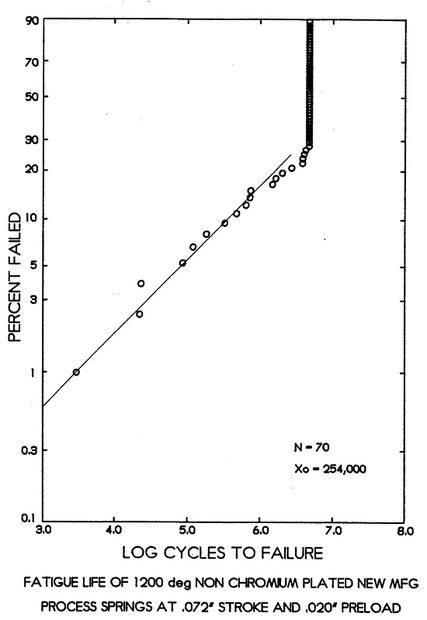 These spring tests were well represented by a three parameter Weibull distribution. This particular test had the Xo Weibull parameter equal to 254,000 cycles.

I have broken bicycle spokes. It was at a time when I was putting 5000 to 6000 miles per year on my bicycle. One memorable grade was over 1000 vertical feet and almost straight. My bicycle speedometer pegged at 59 MPH, and the needle was hard against the peg when there was a tailwind. The tar strips hammered the bike hard enough to bend wheels, bulge tires, and break spokes. This was in the mid 1970's before the fat tire mountain bikes were readily available.
zerodish

I volunteer in the coops. I had a customer come in who had broke 8 spokes on a single ride. I have no idea how far the ride was but if he had used 14 gauge instead of 15 gauge he would have broken 1/5 as many spokes. A much safer ride.

I tour and keep the rear rack loaded even when I'm not touring for testing purposes. A bicycle has a high center of gravity so in hard braking the rear wheel will come off the ground. I have enough weight on the rear to prevent this. Generally 165 to 190 pounds which places me in the 40 to 50 percentile of tandems.

I build the worlds only 45 spoke wheels. This allows every spoke to have the same tension minus the 7 percent difference for spokes coming from the inner of the flange or the outer of the flange. Still I break spokes.
Last edited by a moderator: May 12, 2021
Astronuc
Staff Emeritus
Science Advisor

I've broken two spokes on a road bike. I was riding a lot of hills too. I'm guessing the wheels had about 5000 miles or so when the first one popped. I know one happened on the rear, and I think the second did also. I had to remove the gears (rear cassette) to remove the spokes. One broke at the hub in the bend, while the other broke at the nipple.

I think the spokes 'popped' while going uphill.

I also broke the rear axle (freewheel hub) on the same bike, which I discovered when I was replacing the spoke. Since I had the rear gear cassette removed, I decided to lubricate the bearings and then discovered the broken axle.
berkeman
Mentor

Astronuc said:
I also broke the rear axle (freewheel hub) on the same bike, which I discovered when I was replacing the spoke. Since I had the rear gear cassette removed, I decided to lubricate the bearings and then discovered the broken axle.

How in the world does one break a bicycle axle?
Astronuc
Staff Emeritus
Science Advisor

berkeman said:
How in the world does one break a bicycle axle?

I have no idea. I'm not sure when it happened, but I realized months after the fact that it had become increasingly difficult to ride uphill or achieve maximum speed on the flat under ideal conditions. Once I replaced the axle, I could ride faster. It also helped to lubricate the bearings.

It may have been fatigue + overload.
zerodish

There was about 40 mm between the dropout and the inside of the cone on the standard 5 cog freewheel sold in the 70's Then the industry went mad. Jack Taylor's words not mine. The Modern 7 cog freewheel sold in depertments increased the moment arm to 47.5. mm Meanwhile secular trends in human growth have doubled the strength of modern athletes. It is quite easy to break those axles. I use solid axles made of 4130 steel these bend rather than break.

Shimano moved the cone out reducing the moment arm to 20 mm. This moved the break to the other cone with a moment arm of 30 mm. Some BMX bikes and cargo bikes will use a 14 mm axle on the rear. I have seen one of those bent. Bullseye used a smooth axle with a 12 mm diameter which eliminated the stress riser of threads about 3.3 After never breaking an axle he moved to aluminum from steel. Other makers have copied his designs.

But the reality is most people will buy department store bicycles which don't have those advantages. That's why I advocate 48 spokes and the slightly more expensive cassette design. All of the department store bicycles that use 2.6 mm spokes use a steel hub which also results in broken spokes. I broke only 1 spoke on the front and it had a steel axle.
Last edited by a moderator: May 13, 2021
Share:
Share

Related Threads on My model of bicycle spokes breaking

Use of Bicycle car model?