Possible to solve for the initial speed of a projectile?

Is it possible to solve for the initial speed of projectile hitting a target given that we know the direction (vector) that it is released at and the point on a the surface that it is hitting? If so how would you go about finding an equation to solve for this?

I realize that this is a relatively easy problem to solve when gravity is always aiming in the same direction, but in the particular case I am trying to solve, gravity is varying as it flies through the air. Basically think of a projectile being hit around a mini planet (see the image below), where the force of gravity on the projectile is,

The trajectory trail in the image below is generated from simulating the projectile's flight and adding or removing initial speed to bring it closer to the target position based on the "final" position. This would obviously be done more efficiently by using an equation that would allow me to solve for the initial speed given the initial direction and final position. 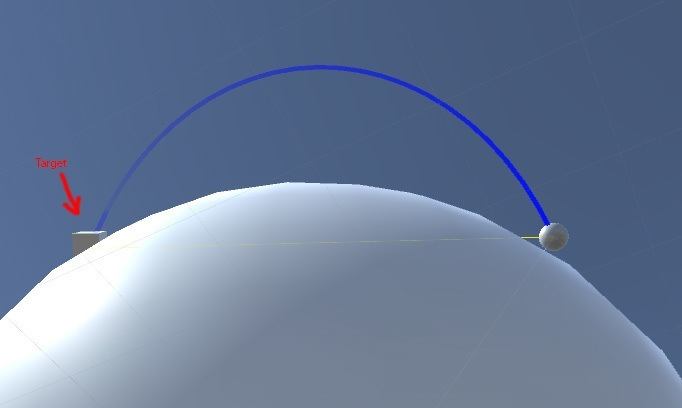 Any help solving this is very much appreciated.

Have a look here to begin with : https://en.wikipedia.org/wiki/Sub-orbital_spaceflight.
A.T.
Science Advisor

silkms said:
If so how would you go about finding an equation to solve for this?

The trajectory is an ellipse. And the speed along it obeys Kepplers Laws.
silkms

First we consider that the path will be a section of an elliptical orbit, with the apogee at the top of the arc. This puts the perigee 180 degrees or pi radians away (and under the surface of the Earth.) To work this problem out, you have to work out the particulars of this orbit.

First we find the eccentricity. For this, we use the equation:

If we work in radians we can get q by

(2)## q = \pi- \frac{d}{2R_p}##
where d is the distance between launch and landing points as measured along the surface of the planet and Rp is the radius of the planet.

With q and f we can solve for e with equation 1.

And solving for 'a', the semi-major axis.

The total orbital energy of the projectile is:

Another way to find the total energy is to add the kinetic and gravitational potential energies of the projectile at the moment of launch together, or

Equating equations 4 and 5 gives us:

* We are assuming here that m is very small compared to M. If this is not the case, then this has to be accounted for in the calculations.
Last edited: Apr 29, 2016
silkms

Janus, Thank you for your very clear response. It has been very helpful!

I've followed your reasoning and tried applying it, but am not getting the correct result.

That being said, I have tried finding the center of the ellipse (which would allow us to correctly find all the missing pieces), but that has eluded me so far.

Any ideas? (Or if I am wrong about using the planets radius please let me know!)
Janus
Staff Emeritus
Science Advisor
Insights Author
Gold Member

silkms said:
Janus, Thank you for your very clear response. It has been very helpful!

I've followed your reasoning and tried applying it, but am not getting the correct result.

That being said, I have tried finding the center of the ellipse (which would allow us to correctly find all the missing pieces), but that has eluded me so far.

Any ideas? (Or if I am wrong about using the planets radius please let me know!) 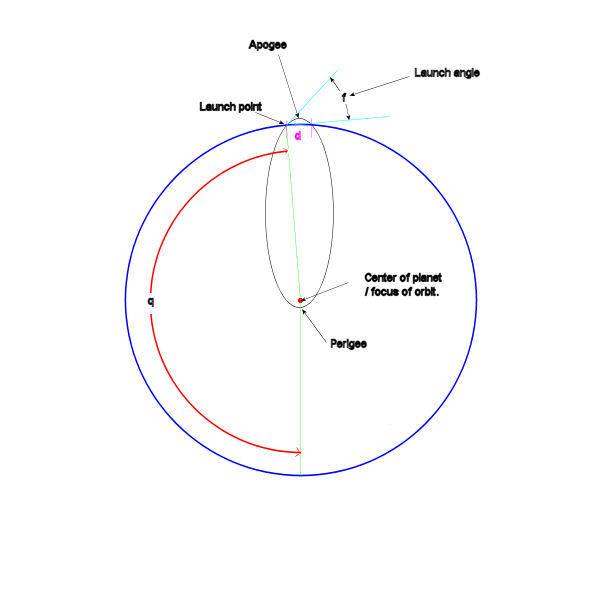 As an example, lets work out the launch speed for a travel distance of 100 km and a launch angle(f) of 1 radian ( 57.3 degrees), using the Earth as our planet.
The radius of the Earth is 6378 km, so using eq. 2, we get 3.1338 rad for q.
Using this value and the above given launch angle, we solve for e using eq. 1, and get an answer of 0.995022
Using equation 3 we solve for a, the semi-major axis of the orbit. (the reason we use Rp in this equation is because this is the distance the projectile is from the focus of the orbit when it is launched and when it is an angle of q from the perigee)
Solving for a gives us 3216.3595 km, which we need to convert to 3216359.5 meters for the next step

Finally using the total energy equations (also being sure to convert Rp to meters) and 3.987e14 m3/s2 for GM,

Janus, thank you for the second breakdown. Went back and found the error in my initial setup and it is now working. Very much appreciated!
Last edited: Apr 29, 2016
silkms

If the position on the ellipse of the second point becomes arbitrary (i.e. not necessarily on the surface of the planet). How could you go about solving this?

I have attempted to find q (the angle to the periapsis) with the new scenario but not having much luck there. Any ideas for finding this or the semi major axis directly? 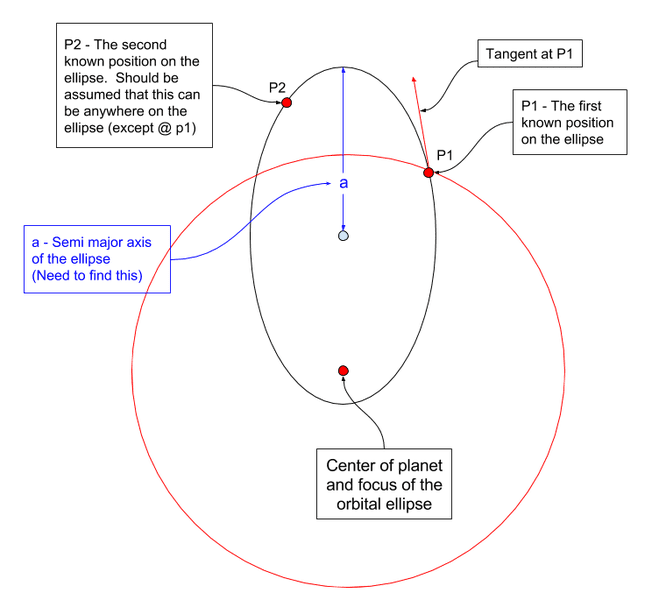 Sorry about taking so long getting back to you on this, but it took some head scratching on my part to get an answer.
Here's what I ended up with:

I started with defining the positions of P1 and P2 as their radial distances from the center of the planet and their angles from perigee as shown here: 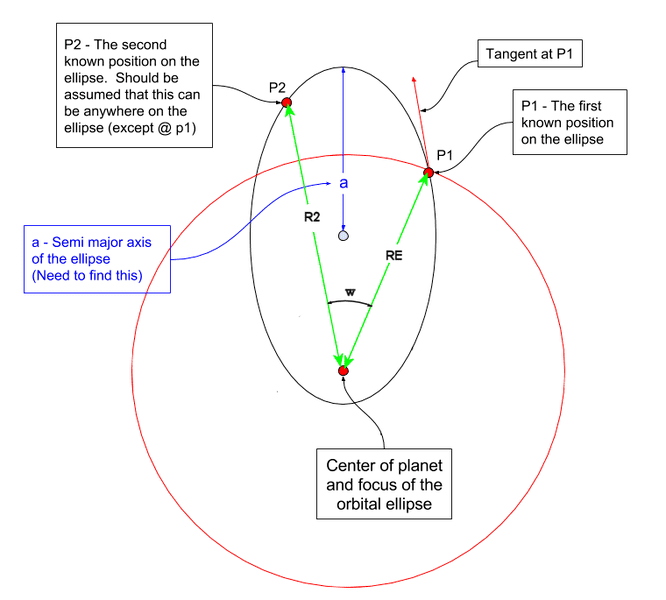 With this information and re-arranging eq 3 from post #6 to solve for a, we can set up the following equality:

we solve for e and equate this solution to eq 1 from the same post.

Related Threads on Possible to solve for the initial speed of a projectile?

Find the initial launching velocity of the projectile.

A
Solving a Projectile given only the initial height, maximum height, & horiz distance

M
Weight of the support of a pendulum with initial speed

Does a sling or a gun exert more initial force of the projectile?

V
Initial velocity required depend on the mass of projectile

H
Initial speed of a football when average speed is known

A
Is it possible to compress speed into a material?

Is it possible to reach speed of sound?

How to solve projectile motion problems