Product of distances from foci to any tangent of an ellipse

TL;DR Summary
Show that the product of the distances from the foci to any point of any tangent to an ellipse is ##b^2##
where b is the semi-minor axis.

As part of the final stage of a problem, there is some algebraic manipulation to be done (from the solution manual):

But I'm getting lost somewhere: 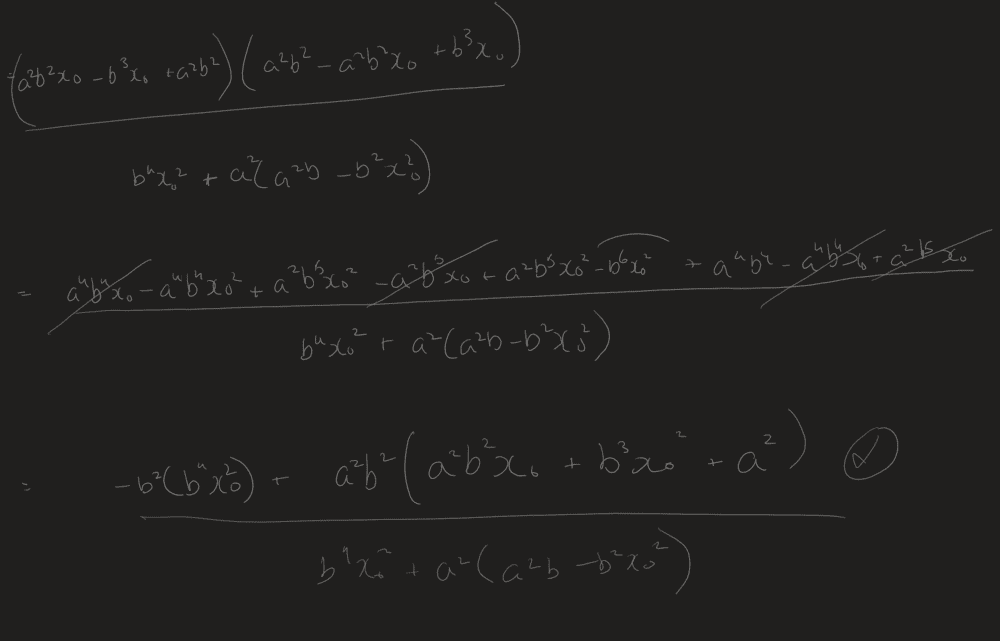 Also a bit of general advice needed: This is part of a self-study Calculus course, and I often have difficulty with bigger algebraic manipulations like this. I often feel if I made a deviation at some point, I will never be able to get to the solution—and I am assuming I need to go through all the possible ways before I have my solution. When in such a situation, I peek at the answer and force the solving into the direction of the solution. Is this bad practice? I feel I shouldn't be spending inordinate amounts of time on algebra in a calculus course.

As written, the statement is clearly wrong. Every point outside the ellipse is element of two tangents, including points that are 1000 b away from the ellipse. What they mean is the distance between the foci and the tangent, not arbitrary points on the tangent.

I don't understand how you get from your first image to the first equation in the second image. Did you swap c <-> c2? It's usually better to simplify first before you plug in things that make the equations longer.
Getting algebra right is an important skill everywhere, so practicing it is a good idea. There are many ways to get to the solution, but a wrong step somewhere will throw off the approach every time. Sometimes it's clear from the wrong answer where things went wrong, sometimes it is not.

Thank you for your advice, I have this misconception that algebra is unimportant in the computer age and keep avoiding algebraic mistakes by abandoning questions that involve any algebra I find difficult. I will do better, and stick to it.
Share:
Share

Suggested for: Product of distances from foci to any tangent of an ellipse

B Approximation of the equation of ellipse

B Reconciling different ways to define an ellipse

I Name of distance to nearest multiple of n function?

MHB Equation for tangent of the curve

I Is there any way to simplify my proof by induction?

B Geometrical meaning of magnitude of vector product